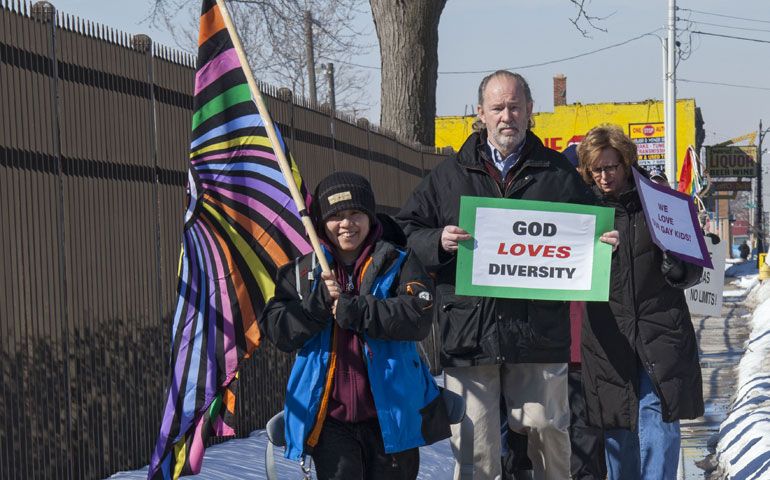 Members of Fortunate Families, a group of parents of LGBT children, hold a prayer vigil outside Sacred Heart Seminary in Detroit March 7. (Newscom/ZUMA Press/Jim West)
This article appears in the Synod on the Family feature series. View the full series.

On Oct. 3, I will be in Rome to participate in an international conference sponsored by the European Forum of Lesbian, Gay, Bisexual and Transgender Christian Groups. The conference is planned to take place just prior to the Oct. 5-19 general session of the extraordinary Synod of Bishops on the family, because one of the major areas of discussion at the synod will be same-sex couples and the education of their children.

In preparing to attend the conference, I asked a number of LGBT Catholics and their supporters what they hoped this synod would accomplish for themselves and future generations of LGBT Catholics.

Not surprisingly, none of them looked to the synod for self-affirmation. Not the Australian gay couple who worked for the institutional church; not the lesbian woman who had been in a religious community but was ultimately rejected because of her sexual orientation; not the gay man who had been heterosexually married for most of his life and came to know and accept his gay identity much later; not the mother who counts the Sunday collection in her parish and loves her gay son; not the 24-year-old who is struggling to understand their own gender identity; not the lesbian politician who came to realize that she needed to hear Jesus' voice, not the hierarchy's, in discerning, "Can I be a good Catholic and a lesbian?"

Most LGBT Catholics have spent their lives working through negative and condemning messages from church leaders. They now feel they do not need approval or recognition because they have achieved a harmony and serenity that comes only with self-acceptance.

One middle-aged gay man said, "I have moved on to live my life as I must. ... As a result of a long journey in conscience ... I need to live my life in a healthy, honest way, with love and a respect of the truth that is at my core in relationship to others. I am freed of the negative pronouncements of the past. ... I know I must live what I discern to be true, regardless of what the bishops think."

Another sadly noted, "No doubt, Rome's position hindered me from becoming all that I had the potential to become," but happily added, "I have been blessed in so many, many other ways, and I am at peace with who and what I am."

Another said, "I am too old now. I have no dreams of getting married or having children. But I am amazed and in awe of gay and lesbian couples who adopt children. What a selfless sacrifice to make."

LGBT Catholics would be delighted if the synod accepted same-sex marriages, but they are realistic enough to believe this will not happen. They are thinking of future generations. They hope that the children of same-sex unions will have access to all the rights and opportunities of any Catholic, whether sacramental or educational.

All the folks I spoke with expressed some hopes for the outcome of the synod, not for themselves, but for others -- for those "most susceptible to harm," as one person said. They considered the Catholics in the pew who grew up in a culture that said, "Father knows best"; gay and lesbian employees in Catholic institutions; parents who learn that their children are gay or lesbian; young folks who struggle with issues of self-worth because of their gender or sexual orientation feelings; those who are wanting to grow in their spiritual journey with God but cannot reconcile statements of the official church with their own conscience.

The hopes of LGBT Catholics are crystallized in Marty Haugen's song, "All Are Welcome." They long for positive words from their church leaders, instead of hurtful messages of rejection. Some feel accepted in their own parish, but they know that acceptance of LGBT people in all parishes depends on sympathetic words from higher authorities.

LGBT Catholics hope that the synod will recognize the variety of families in the Christian community and include all kinds in its pastoral ministry. After all, if Joseph was not Jesus' biological father, the Holy Family was a nontraditional one. Families are all brought together by love, not biology.

I think of the nontraditional families I know: a father, his daughter and her female spouse who both tenderly nursed the father as he died peacefully at the couple's home; parents and grandparents who supported Isaac in his transition from a biological female to a biological male; two married men who are lovingly raising three orphans who were abandoned by their biological parents. These are all families because they are united by love.

Pope Francis, they believe, has a caring and welcoming instinct and sees that his flock is hurting. He has told his bishops to "smell like the sheep," to feel for their flock, and to care for them when they are in danger of being bullied or denied work or a place at the eucharistic table just because of who they are. If the bishops are to "smell like the sheep," their response can only be, "All are welcome."

[Loretto Sr. Jeannine Gramick is a leading advocate for lesbian, gay, bisexual and transgender rights as a co-founder of New Ways Ministry.]