Of liturgy and life: Jesuit scholar reflects on his 46 years in Rome 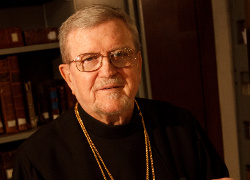 But then he shared what he believes is the line his former students quote most: "There are two things you do not do alone: liturgy and sex."

The world-renowned liturgical scholar was interviewed Dec. 13 as he prepared to return to the United States after more than 46 years in Rome.

Students and friends share his pithy quotes with relish and his graduate summer school students at the University of Notre Dame even published a collection of them several years ago.

"They're totally spontaneous. It's not like I sit in my room before class thinking, 'What wisecrack can I throw at them today?' It just happens," he said.

Taft, who said he's "on the top of the heap" when it comes to knowledge of the Byzantine liturgy, officially retired as a professor at Rome's Pontifical Oriental Institute in 2002. He is scheduled to move to the Jesuit retirement center in Weston, Mass., just after Christmas and will celebrate his 80th birthday Jan. 9.

With more than 800 titles already to his credit, the Rhode Island native, who was ordained in the Byzantine rite in 1963, still has one big writing project left: completing the sixth and final volume of his history of the Liturgy of St. John Chrysostom, used by both Eastern Catholics and Orthodox.

Packing interrupted work on the book, he said, but the slow progress also is due to less energy and more time devoted to prayer.

"One of the advantages of getting old is that what the Byzantine liturgy refers to as the 'dread tribunal of Christ' that you're going to stand before puts the fear of God into you, and so you move to pray more," he said. "That already has had an influence on my spiritual life."

In addition to teaching, Taft served for decades as an adviser to the Vatican, writing more than 90 reports, draft documents and expert opinions on matters related to the Eastern churches.

"It's better to be part of the process than to stand on the sideline and criticize, although I criticize, too," he said. "My attitude has always been I'd rather have myself writing these decisions than have someone dumber than me doing it."

"I write on liturgy so that people might understand it better and celebrate it better," he said.

Without a doubt, he said, Eastern Catholics know more about their liturgical tradition than they did before the Second Vatican Council, and it shows in the way they celebrate their liturgies. The situation isn't perfect across the world, he said, citing as an example Russian Byzantine communities where the choir tends to take over all the people's parts and the congregation ends up being spectators.

"Liturgy is a play where there is no audience. We're all actors," he said.

As for a popular notion that the so-called Tridentine Mass in the Latin rite approaches the Byzantine liturgy's sense of mystery better than the modern Mass in the vernacular does, Taft said, "Nonsense."

"The prayers are not for God. God happens to know the whole show already," he said. "The language is for us, and if you don't understand the language" -- whether in Latin or your native tongue -- "then you've got a problem."

"The notion that the language creates the mystery is the height of asininity," he said.

For Taft, after a lifetime of studying every word and detail of the liturgy, the mystery increases with knowledge and understanding.

He also said people are wrong to assume the Tridentine Mass is closer to "Catholic tradition."

Taft is solidly on the side of the faithful who can't abide by priests inventing and innovating in the liturgy as it catches their fancy. But he doesn't blame that on the Second Vatican Council, which held its last session in 1965, the semester he arrived in Rome.

"What the Second Vatican Council did was return the liturgy to those to whom it really belongs: the people of God," which includes the clergy, but not exclusively, he said.

Taft has given away hundreds of books preparing to move, but not his liturgical books because, he said, he needs them for prayer.

The Weston house "offers full-care service" with rooms for Jesuits who can live independently and an "assisted living" floor for those needing a bit of help. The ground floor has an infirmary and "a chapel where you have the funeral and across the lawn is the cemetery. Everything's right there."

"That's where we're all heading eventually, and not to face it is stupid and immature, in my opinion," he said.

Facing the inevitable, of course, includes some reflection on the past.

"Being a Catholic priest is a wonderful thing. It really is," Taft said. "As long as he's not a turd, people will do anything for their priest."

After almost 80 years of life, the Jesuit said the key to happiness is trying to help others; "that's what it's all about."

"You're looking at a happy man," he said.

Vatican | Of liturgy and life: Jesuit scholar reflects on his 46 years in Rome

Francis clears way for Romero to be canonized later this year