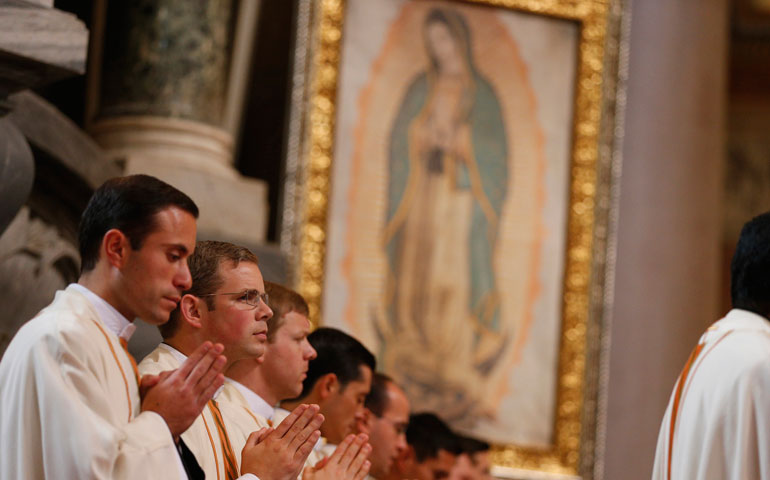 New priests of Legionaries of Christ seen during their ordination at Basilica of St. John Lateran in Rome Dec. 14. (CNS/Paul Haring)

Under ordinary circumstances, a religious order's general chapter is nobody's idea of a news event. Basically a business meeting for representatives of the order from around the world, a general chapter typically is consumed by minutiae and insider baseball, and elections for new leaders are often of interest only to the candidates themselves -- sometimes, honestly, not much even to them.

For the embattled Legionaries of Christ, however, the circumstances are anything but ordinary.

By dint of circumstance, most notably spectacular revelations of abuse and misconduct by their founder, the late Fr. Marcial Maciel Degollado, the Legionaries have become a leading symbol of the sexual abuse scandals that have plagued Catholicism. They've essentially been in papal receivership for the past three years, since Pope Benedict XVI imposed a Vatican overseer on the order and its related Regnum Christi lay movement in 2010.

For critics, the Legionaries represent the worst of the abuse scandals, not only because of Maciel's misconduct, which included relationships with two women and fathering up to six children as well as charges of abuse of boys, including seminarians, but because of the way the influential Mexican cleric was long protected by church authorities, up to and including Pope John Paul II.

Nor are the order's troubles over.

As recently as mid-December, the Legionaries announced that an investigation had found "significant evidence of sexual abuse" by a priest who served as novice master at a Cheshire, Conn., seminary.

Many of the order's most prominent personalities have either jumped ship or left amid their own scandals, while some of the Legion's erstwhile friends have called for it to be abolished. A recent piece by The Associated Press, summing up conventional wisdom, described the Legionaries as "one of the most egregious examples of how ... church leaders put the interests of the institution above those of the victims."

To be sure, there are no indications the Legion is going out of business. Pope Francis recently appointed a prominent Legionary as the No. 2 official at the Vatican City State, the order ordained 31 new priests from around the world in mid-December, including eight from the United States, and the Legion marked the 73rd anniversary of its foundation Jan. 3.

The question instead seems to be whether the Legionaries will end up as a fringe element in the church, under a permanent cloud of suspicion, or whether they can recapture some of their earlier missionary élan. Because it's happening on his watch, the direction of the Legionaries also profiles as a key test of whether Francis will succeed in steering the church toward greater transparency and accountability.

As a result, the general chapter meeting that opened Jan. 8 looms as a make-or-break moment for the Legion to persuade the world that its commitment to reform is real.

After defections by scores of former members, as of early 2014 the Legionaries of Christ numbered four bishops, 932 priests and some 900 religious in preparation for the priesthood. Regnum Christ claims roughly 70,000 members worldwide.

The general chapter, intended to mark the formal close of Vatican-imposed oversight, opened with a Mass celebrated Jan. 8 by Italian Cardinal Velasio De Paolis, the official charged by Benedict three years ago with leading the Legion on a path of reform. Business meetings were scheduled to begin the following day.

The chapter consists of De Paolis and two advisers as well as 61 Legionary priests, 42 of whom were elected by their fellow Legionaries and 19 participating by virtue of their office. Representatives of the Regnum Christi movement have also been invited to participate. Members of the chapter took part in a weeklong set of spiritual exercises leading up to the meeting.

Five of the priests who will vote on the revised constitutions and new leadership represent North America, including American Fr. Owen Kearns, the former publisher of the National Catholic Register, a paper once owned by the Legion and acquired in 2011 by the Catholic media network EWTN.

The first phase of the chapter, which the Legion says should last about 20 days, will be devoted to revisions of the order's constitutions and the election of new leadership. Although the meetings will take place behind closed doors, the Legionaries have pledged to make the results of their work public.

The outcome will be closely scrutinized, both in terms of whether the Legionaries elect a leadership team associated with reform and whether their new rules represent a clean break with what has been seen in the past as an overly secretive, top-down form of control.

The second phase of the chapter, which has no firm end date but is expected to last until the end of February, is to address "various issues regarding the life of the congregation," according to a Legionary statement.

Because the Legion is a congregation of pontifical rite, meaning subject to the pope, Francis will have to approve both its new constitution and its leadership team. There's no firm timetable for that to happen, though Legionary officials say they expect a decision in a few months.

On background, Vatican officials told NCR in early January that one possibility is that Francis could grant merely provisional approval, waiting to see how the new regime plays out in practice before giving his full blessing.

Judging by public reaction, the Legionaries may have a steep hill to climb in persuading critics they've turned over a new leaf. In late December, one prominent group of former members publicly asked if the Vatican understands what needs to be reformed.

The group, called ReGAIN, asserted, "The old guard leaders and their attitudes remain; a valid charism remains unidentified; the aggressive recruiting continues; information is suppressed and the members continue to be manipulated to the benefit of the same old people who stand to gain the same old money and power from the members' efforts."

In a similar vein, the Survivors Network of those Abused by Priests (SNAP), the main advocacy group for clergy abuse victims in the United States, issued a statement Jan. 6 asserting that it's "dreadfully premature and naive" to think the Legion is on a reform path.

Despite that skepticism, current members of the Legion insist that things have changed for the better.

"There's no longer really any aura or temptation to think that we're any better or different than anybody else," said Fr. Matthew Schmitz, who grew up in Minneapolis-St. Paul and was among the 31 new Legionary priests ordained in December.

"For the rest of my life when I say I'm a Legionary of Christ, I'll make a little vow of humility," Schmitz told NCR in a Dec. 18 interview. "We've suffered, our founder has made others suffer, but I'm here because God called me and I want to do good for the church."

The Legion has said that it will post day-by-day updates on the general chapter at capitulogeneral.legionariosdecristo.org/index.php/en/day-by-day.

[John L. Allen Jr. is NCR senior correspondent and will be in Rome to cover the Legionaries' general chapter from Jan. 16. Email him at jallen@ncronline.org.]

A version of this story appeared in the Jan 17-30, 2014 print issue under the headline: A make-or-break moment for the Legion of Christ.