Marine in besieged Ukrainian city writes to Pope Francis: 'This is hell on earth'

by Christopher White
Vatican
World
This article appears in the War in Ukraine feature series. View the full series. 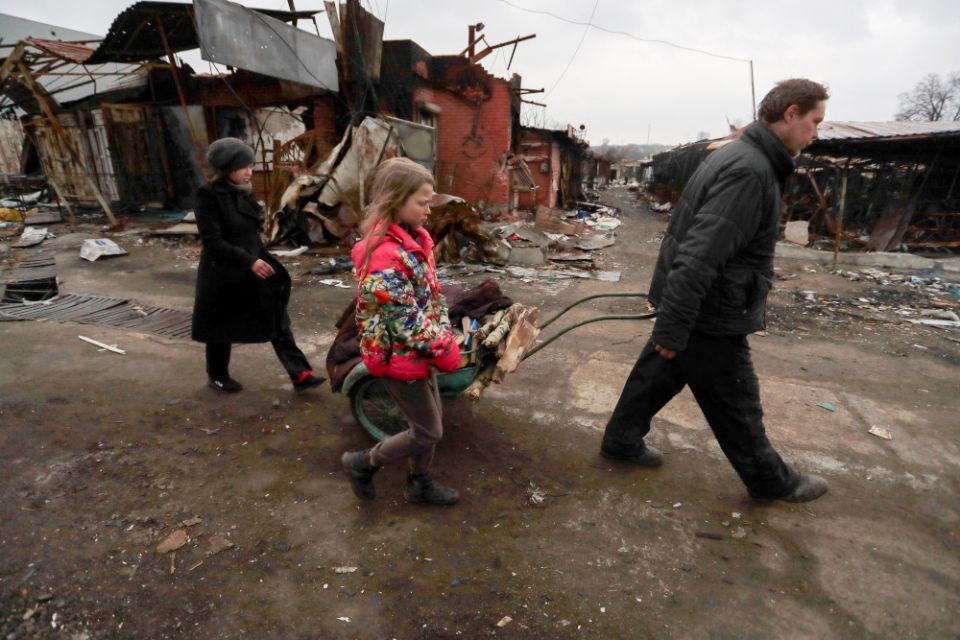 A man pulls a cart of wood alongside a woman and girl as they pass destroyed buildings in the port city of Mariupol, Ukraine, April 14, 2022, during the Russian war. (CNS photo/Alexander Ermochenko, Reuters)

Rome — A Ukrainian Marine in the besieged city of Mariupol has written to Pope Francis pleading for the pontiff to personally intervene on the city's behalf, as Russian forces continue their devastating, weeks-long siege on the strategic port on the Sea of Azov.

The commander said that more than prayer was needed to "save our lives from satanic hands."

A photo of Volyna's letter and pictures of destroyed buildings in Mariupol were shared on social media by Ukraine's Vatican ambassador, Andrii Yurash, on April 18.

Mariupol has been under siege by Russian forces for over a month and the city's government has said that over 10,000 residents have been killed.

Some of the most gruesome scenes that have emerged since the outbreak of the war have come from Mariupol, where a number of high rise residential buildings, commercial shopping centers and cultural landmarks have been reduced to rubble.

Francis, during his March 13 Sunday Angelus address, singled out the destruction it has experienced, noting that "the city that bears the name of the Virgin Mary, Mariupol, has become a city martyred by the ruinous war that is devastating Ukraine."

Throughout the war, a number of Ukrainian political and military officials have appealed directly to Francis, asking for his support and even requesting that he visit the Ukrainian capital of Kyiv in an effort to bring about peace.

While the pope and the Vatican have expressed a willingness to make the trip, it is unknown what effects such a trip would have on the situation on the ground.

"A trip is not impossible; it can be done. It's a matter of seeing what consequences this trip would have and assessing whether it would really contribute to ending the war," said Cardinal Pietro Parolin, the Vatican's secretary of state, on April 7.

During Holy Week, Francis repeatedly appealed for peace in Ukraine, saying on April 17 that this is an "Easter of war."

On April 16, the Holy See press office announced that the pope also met with​​ representatives of "the local government and the parliament of the country," some of whom attended the Vatican's Easter Vigil service that evening.

Addressing the delegation directly at the end of his homily, the pope said "we are praying for you and with you"

"We can only give you our accompaniment, our prayer and tell you, 'Courage,' and accompany you. And to also tell you the greatest thing that we celebrate today," he said.

Then, the pope concluded his remarks by switching from Italian to Ukrainian, with a final message in the visitors' native tongue: "Christ is risen."

A version of this story appeared in the April 29-May 12, 2022 print issue under the headline: Ukrainian Marine writes to Pope Francis .

Vatican | Marine in besieged Ukrainian city writes to Pope Francis: 'This is hell on earth'

At Angelus, pope warns against using God, others for selfish aims