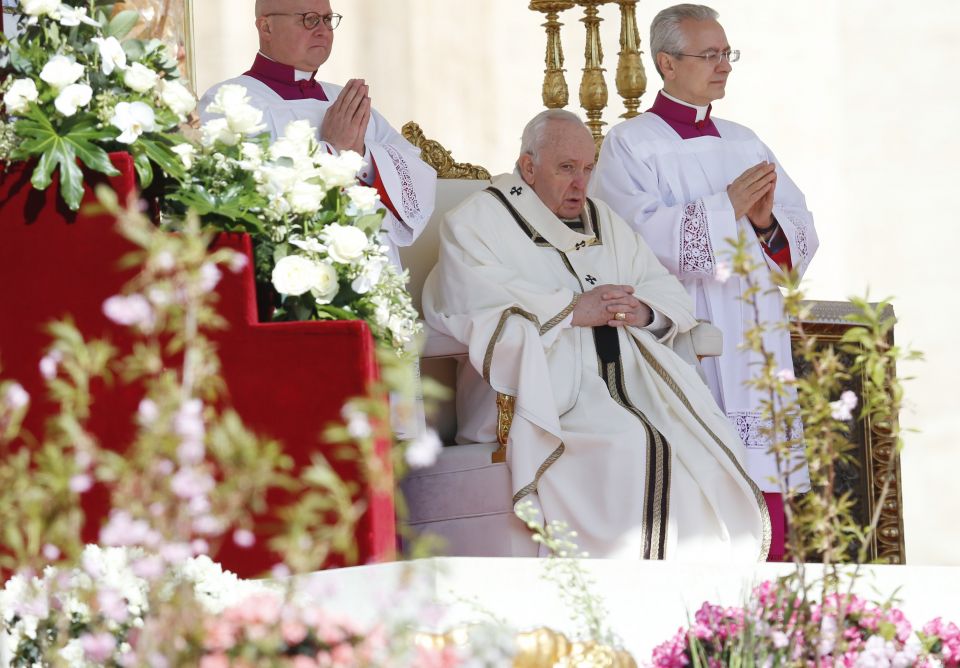 ROME — Pope Francis used his Easter message to again appeal for peace in Ukraine, saying the country has been "dragged" into a "cruel and senseless war" and warning that if the conflict escalates, it could lead to the destruction of humanity.

"May the leaders of nations hear people’s plea for peace," the pope said on Easter Sunday, April 17. "May they listen to that troubling question posed by scientists almost 70 years ago."

"'Shall we put an end to the human race, or shall mankind renounce war?'" Francis asked, quoting from the 1955 Russell-Einstein Manifesto, which warned of the global destruction that could be caused by nuclear weapons.

"May there be an end to the flexing of muscles while people are suffering," the pope pleaded. "Please, let us not get used to war!"

Despite the celebratory atmosphere in St. Peter's Square, filled with an estimated 100,000 pilgrims and adorned with some 40,000 fresh flowers from the Netherlands, the pope struck a somber tone throughout his urbi et orbi ("to the city and the world") message, which came at the end of the Easter liturgy and was delivered in lieu of a homily during the Mass.

The 85-year-old pope presided over the outdoor service, despite suffering from severe knee pain, which has limited his mobility the past two months. He was joined by 23 cardinals, 25 bishops and some 280 priests for the Sunday Mass for the first Easter celebration to take place in St. Peter's Square since 2019 due to the COVID-19 pandemic.

During the Easter Vigil on Saturday evening, April 16, Francis delivered the homily and baptized seven people, but he did not preside and remained seated for much of the nearly three hour liturgy. On Sunday, the pope began delivering his remarks standing, but took a seat half way through his address.

Throughout this year's Holy Week celebrations at the Vatican — beginning with the pope's Palm Sunday homily a week earlier on April 10 and continuing through the Way of the Cross service on Good Friday and the Saturday Vigil — Francis repeatedly focused on destruction wrought by the war in Ukraine.

"I hold in my heart all the many Ukrainian victims, the millions of refugees and internally displaced persons, the divided families, the elderly left to themselves, the lives broken and the cities razed to the ground," the pope said on Easter Sunday.

"I see the faces of the orphaned children fleeing from the war," the pope continued. "As we look at them, we cannot help but hear their cry of pain, along with that of all those other children who suffer throughout our world: those dying of hunger or lack of medical care, those who are victims of abuse and violence, and those denied the right to be born."

Francis was joined on the central balcony of St. Peter's Basilica by Canadian Cardinal Michael Czerny, who heads the Vatican's migrants and refugees department and who, in recent weeks, has taken several trips to Ukraine on behalf of the pope.

The pope noted that despite the pain and destruction caused by war, he was pleased to see countries throughout Europe opening their borders and homes to refugees fleeing conflict.

"May these numerous acts of charity become a blessing for our societies, at times debased by selfishness and individualism, and help to make them welcoming to all," he said.

After focusing primarily on the conflict in Ukraine, Francis offered a litany of prayers for other countries facing violence and war, especially in the Middle East and Africa, as well as nations suffering from natural disasters, poverty and corruption.

Francis lamented that after two years of a global health crisis — where many people have come together "pooling our strengths and resources" — the world is now facing an "Easter of war."

"We are showing that we still have within us the spirit of Cain, who saw Abel not as a brother, but as a rival, and thought about how to eliminate him," he said. "We need the crucified and risen Lord so that we can believe in the victory of love, and hope for reconciliation."

"Today, more than ever," he continued, "we need him to stand in our midst and repeat to us: 'Peace be with you!'"

Seven days that shook the Vatican