A new face of Catholicism 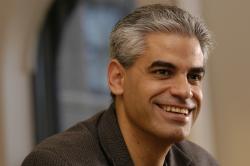 National churches don’t have delegates in Rome, so officially nobody’s there to speak for American Catholicism. Informally, however, high-profile Americans in and around the Vatican present faces of the Catholic community in the States, both to Rome and to the wider Catholic world.

In that light, President Barack Obama’s May 27 appointment of Cuban-American theologian Miguel Díaz as ambassador to the Holy See is especially intriguing, because Díaz embodies two currents in American Catholicism heretofore not terribly visible in the Eternal City: its burgeoning Hispanic wing, and its center-left theological guild.

In part because Díaz is not well known outside theological circles, and in part because he doesn’t have a clear record on the hot-button issue of abortion, reaction to the appointment has been fairly muted. As time goes on, however, two baseline readings seem plausible:

Whichever reading one adopts -- and, to be sure, both are already circulating in different Catholic circles -- the appointment should open an interesting new chapter in U.S./Vatican relations, as well as in Roman impressions of American Catholicism.

Díaz, 45, has no previous diplomatic experience. Born in Cuba, he and his family left when he was 8. Díaz earned a doctorate in theology from the University of Notre Dame in 2000, and has served as a professor at the College of St. Benedict and St. John’s University in Collegeville, Minn., since 2004. Assuming Díaz is confirmed by the Senate, he could be on the job by early July, when Obama is expected to meet Pope Benedict XVI while in Italy for a G-8 summit.

Díaz has described himself as uncomfortable with liberal/conservative labels, saying he regards himself as a “Trinitarian theologian.” Scanning his writings, his main political interest seems to be social justice matters, above all immigration. Some have described Díaz as a liberation theologian, but he distinguishes between the “option for the poor” in Latin America and an “option for culture” in Hispanic theology in the United States, focused on Latino identity. Colleagues say that Díaz has also built bridges between Hispanic theology and feminist and African-American perspectives.

Cardinal Francis George, president of the U.S. Conference of Catholic Bishops, was a bit more circumspect, telling NCR that the conference has a policy of not commenting on appointments. Nonetheless, George said he’s sent a private letter to Díaz congratulating him and inviting him into conversation.

Díaz would become the ninth American ambassador to the Holy See, and the first Hispanic to hold the job. In that sense, he’s emblematic of the changing demography of the American church.

Based on projections from the Pew Forum, by 2030 more than 40 percent of the roughly 70 million Catholics in America will be Hispanic, and for the first time white Catholics will no longer represent a majority. A recent Pew study also concluded that were it not for Hispanic immigration and high Hispanic birth rates, the Catholic church in America would be contracting.

That trend, however, is not yet reflected in the American church’s leadership ranks. There is presently no Hispanic cardinal in the United States, and no senior Hispanic cleric from the States serves in the Vatican. As a result, Díaz will be the most visible Hispanic Catholic from the United States on the Roman stage.

Intellectually, Díaz also represents another constituency that sometimes feels invisible, or misunderstood, in Rome: the moderate to liberal camp, which by most accounts represents a majority among professional American Catholic theologians.

One way of handicapping where someone stands in Catholic theology after the Second Vatican Council (1962-65) is how they react to the late German Jesuit Karl Rahner. In broad strokes, Rahner’s “transcendental theology,” featuring an optimistic view of nature and an emphasis on God’s presence outside the institutional church, has been a touchstone for progressives and a source of consternation for more conservative thinkers.

Díaz is clearly a Rahner fan. His most recent book is titled On Being Human: U.S. Hispanic and Rahnerian Perspectives, and employs Rahner’s framework to understand currents in Hispanic theology. Among other things, Díaz argues that Rahner’s thought is open to “the historical praxis of oppressed communities.”

Given the way Díaz’s theology blends European and Hispanic perspectives, admirers argue that Obama’s choice reflects a keen grasp of the Catholic future, potentially offering Rome a resource to understand the contours of an increasingly diverse church.

Critics, however, apply a more political gloss. Although Obama captured 54 percent of the Catholic vote overall, he lost white Catholics and Catholics who attend Mass at least once a week. Those deficits were offset by 72 percent support from Hispanic Catholics, and an overwhelming margin among self-identified Catholic liberals.

On this reading, the future Obama has in view isn’t so much that of the Catholic church in the 21st century, but rather American politics between now and 2012. The suspicion is that Obama and his advisors hope to divide the church along ethnic, linguistic and ideological lines, thus making it less likely to offer compact opposition to the administration’s abortion policies. While Díaz’s job is diplomatic rather than political, some previous American ambassadors to the Holy See have played an important behind-the-scenes role in advising their administrations on outreach to Catholic voters.

Díaz has declined media requests for interviews, and so far a date has not been set for his Senate hearing.

Vatican | A new face of Catholicism