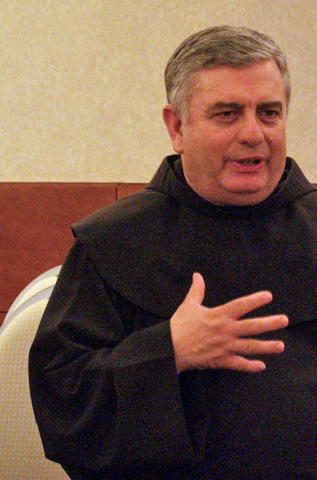 Amid the continuing uncertainty of two separate Vatican investigations into their lives and work, U.S. Catholic sisters "can never lose hope" about their role in the church, the new second-in-command of the Vatican office that oversees them said Tuesday.

The difficulties of the moment, said Franciscan Fr. Jose Rodriguez Carballo, the new secretary of the Vatican's Congregation for Religious, "can never take us to despair."

"In the moment of least hope, the sun could shine -- and I can see it," Rodriguez said. "I invite [the sisters] to prayer, discernment and dialogue -- communion. These are the three words that the consecrated life always has to have present."

Rodriguez, appointed to the Vatican post April 6, spoke exclusively to NCR at the sidelines of an international meeting of leaders of women's congregations.

The interview, which lasted about 20 minutes, is the first the new secretary has given to an English-language news outlet since the announcement he was leaving for the Vatican from his former post as the minister general of the Orders of Friars Minor, which traces its roots directly to 13th-century St. Francis of Assisi.

One, launched by his congregation, looked into the lives of the individual orders of U.S. sisters. The other, launched the Vatican's Congregation for the Doctrine of the Faith, investigated their umbrella group, the Leadership Conference of Women Religious (LCWR), which represents about 80 percent of some 57,000 U.S. sisters.

Cardinal João Braz de Aviz, the head of Rodriguez's new Vatican office, told the approximately 800 sisters gathered for the international meeting Sunday that the doctrinal congregation never consulted him on its investigation of LCWR and said the lack of communication caused him "much pain."

In his interview Tuesday, Rodriguez also spoke on the status of investigation his congregation launched, known as an apostolic visitation; on his view on the future of religious life; and on Pope Francis' mission for the church.

The new pope, Rodriguez said, wants to remind people that the "mission of the church has to embrace everybody."

That means "we're not going to exclusive, we don't exclude others," Rodriguez said. "The mission of the church is always inclusive. It doesn't exclude anyone."

Rodriguez spoke to NCR shortly before celebrating Mass Tuesday for the sisters gathered in Rome, who were meeting under the aegis of the International Union of Superiors General, a membership group for some 2,000 leaders of Catholic sisters around the world.

Opening the Mass, Rodriguez thanked the sisters for their invitation for him to join them and assured them that "the congregation is there at your service, do not doubt."

"Ask what you need," he told the sisters. "We are there to serve you because we love you, the way you are. We love you."

"I've had the possibility to visit the world three times over," Rodriguez said during a homily later in the Mass.

"In the most forgotten corners ... in the most arid spiritual deserts, there I always found a community of sisters who gave courageous witness to the Gospel," he said. "As little ones among the littlest ones, teaching healing, accompanying all kinds."

"What would be of the thousands of thousands of poor people who you serve without preserve?" he asked. "I am convinced that the church needs you because the world needs you."

Following is NCR's full conversation with Rodriguez, edited for clarity and context. Rodriguez spoke in his native Spanish, and Mercedarian Sr. Filo Hirota translated his answers into English.

NCR: How did you learn of your appointment to the congregation?

Rodriguez: For me, this appointment as the secretary of the congregation was a big surprise. I was not waiting for this appointment. And I received it with joy because that means the trust that the Holy Father has in my person and in the order of Franciscans. With joy, because that means that I will be able to work for consecrated life in the world but at the same time, with some sadness, because I was very happy working for the animation of the Franciscans and now I have to interrupt this direct animation.

Also, I have a bit of fear because the work that awaits me is big. But I assume it with much trust in God because I didn't look for it, trust in the thousands of consecrated persons in the world and trust also in concrete terms that I know the Holy Father loves the consecrated life. So he will be very close to our work and of course we will collaborate in everything that is necessary.

Also I'm very, very happy because I knew the prefect [Cardinal Joao Braz de Aviz] already, and I know that he's a person who loves communion, dialogue. He's very open to any kind of direction, and also he's very clear in his orientation.

Therefore, I assume this service with much trust.

Cardinal Braz de Aviz came and spoke with the sisters at this gathering. He said the pope asked him for three names to be his secretary, then asked, "Who's your favorite?" Braz de Aviz said he said clearly, "Carballo." How do you two know each other? What's the story there?

So this was a way how I came to know him. All the rest is really a blessing, coming from God, coming from the Holy Father.

When the cardinal came to visit the sisters, he spoke about the Vatican's relationship with the U.S. sisters and LCWR. The cardinal said he felt pain because there wasn't communication inside the Vatican about what was going on. When you hear that going into your new role, what do you think?

At this moment, I will limit myself to listening. I participated in the meeting of LCWR and the religious congregation [part of LCWR's annual visit to Vatican dicasteries this April].

My role at this moment is to listen and try to understand the situation. And I believe between the LCWR and the religious congregation, there is a sort of climate of trust. This gives me much hope.

For us to discover a way that will lead us to what is best for the life of women religious in the U.S.

The meeting with LCWR was the only time I have assisted the congregation so far. I will start working full time May 22. You can be sure that we will very, very transparent in everything.

Since you obviously have long experience in religious life -- being a Franciscan, being the successor to St. Francis -- can you boil down in one sentence or one phrase your vision of religious life or of shared church leadership?

Since your appointment, have you met personally with the Holy Father?

What encouragement, what direction did he give you?

These are two elements that cannot be removed in the animation of consecrated life in the discernment to see if something is coming from God or not and what is against the will of God. Prayer and dialogue has to be very close to all the consecrated persons.

I had a very, very long visit with the Holy Father -- very, very fraternal.

How long were you visiting him?

One hour and 15 minutes.

The Holy Father appears to be focused on going out to the poor. What is your interpretation of the Holy Father's mission for the church today?

I believe that the mission of the church is the mission of Jesus. In the Gospel of St. Luke, in the synagogue of Nazareth, Jesus interprets the sacred Scripture, and he was making reference to himself. He recognizes his mission as giving the good news to the poor.

The mission of the church has to embrace everybody, those who are near and those who are far away -- and not only in terms of geography. But our particular attention should be directed to the poor.

And this insistence of the Holy Father reminds us of this priority of the church, that we're not going to exclusive, we don't exclude others. The mission of the church is always inclusive. It doesn't exclude anyone.

Part of what the sisters have talked about for five days is leadership, being servants as leaders, and the question of authority and power. On Tuesday, for example, they said the No. 1 authority is God. As you go into your role with religious, how do you see that?

The fundamental criterion for those in authority is offered by Jesus himself: that is, service. Pope Francis reminded us in one of his homilies that power, not only in the church but certainly in the church, is service. You cannot understand authority from the evangelical viewpoint if it is not service.

The first should be the last. And then Jesus said, "I have come to serve and not be served." St. Francis reminds us the service of authority is expressed in the washing of the feet. We have to have it always present, especially those people who are called to serve.

There is a letter of St. Francis -- I talk about Francis because I carry it very deeply in my heart -- where he gives other criteria about authority. That is compassion. St. Francis says if anyone sins, and then asks you for compassion, you have to compassionate. And if the person doesn't ask you, then you offer your compassion even if you're not asked.

What message do you want to deliver to women religious in the U.S. who are dispirited by the investigation of LCWR and the apostolic visitation? Is there a message that you would like to deliver to them?

You can never lose hope. The difficulties can never take us to despair. In the moment of least hope, the sun could shine -- and I can see it.

I invite to prayer, discernment and dialogue -- communion. These are the three words that the consecrated life always has to have present.