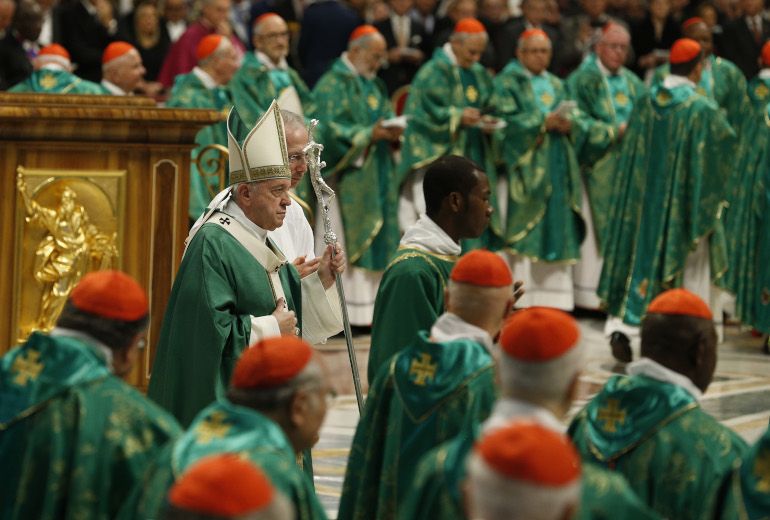 Pope Francis arrives in procession to celebrate the opening Mass of the Synod of Bishops on the Amazon in St. Peter's Basilica at the Vatican Oct. 6, 2019. (CNS photo/Paul Haring)

Vatican City — Opening a monthlong gathering of Catholic bishops expected to consider controversial issues such as the ordaining of married priests on a regional basis, Pope Francis Oct. 6 warned the 185 prelates taking part against being "smothered by the ashes of fear and concern" in defense of the church's status quo.

In a homily for the opening Mass of the Synod of Bishops for the Amazon region, which will continue through Oct. 27, the pontiff said that while Catholic prelates are called to be prudent, they are also called to be open to the possibility of new things.

"Prudence is not indecision; it is not a defensive attitude," the pope told the bishops gathered in St. Peter's Basilica. "It is the virtue of the pastor who, in order to serve with wisdom, is able to discern, to be receptive to the newness of the Spirit."

"Rekindling our gift in the fire of the Spirit is the opposite of letting things take their course without doing anything," said Francis, asking that God would give the prelates attending the meeting a "daring prudence … to renew the paths of the church."

Francis' Amazon synod, which has been in preparation for 18 months, is expected to address a number of potentially contentious issues, including married priests, some sort of recognition for women's ministry, and how Catholic communities in the nine-nation region can speak more vocally against rampant ecological destruction taking place there.

Although organizers have framed the event as a way for the region's prelates to consider the unique needs of the millions of people who live in or near the world's largest rainforest, the gathering has attracted an unprecedented level of criticism from a vocal minority of Catholics, including some cardinals.

Just days before launch of the synod, Canadian Cardinal Marc Ouellet, who leads the Vatican office that helps the pope determine which priests become bishops, held an event to launch a book defending the practice of priestly celibacy.

U.S. Cardinal Raymond Burke, who Francis removed as head of the Vatican's Supreme Court in 2014, attended an Oct. 5 Rome event that included apocalyptic warnings that the synod would result in the "dismantling" of the entire global church.

In his 12-minute homily, Francis was markedly blunt and forthright. The pontiff said that in their ordination Catholic bishops receive a gift of ministry that is like a fire that they are to share with others.

"A fire does not burn by itself; it has to be fed or else it dies; it turns into ashes," said the pope. "If everything continues as it was, if we spend our days content that 'this is the way things have always been done,' then the gift vanishes, smothered by the ashes of fear and concern for defending the status quo."

Quoting Pope Benedict XVI's 2010 apostolic exhortation Verbum Domini, Francis said: "In no way can the Church restrict her pastoral work to the 'ordinary maintenance' of those who already know the Gospel of Christ. Missionary outreach is a clear sign of the maturity of an ecclesial community."

"Jesus did not come to bring a gentle evening breeze, but to light a fire on the Earth," said the pope.

The synod, which formally carries the title "The Amazon: New Paths for the Church and for Integral Ecology," will have its first business session Oct. 7, when Francis is expected to again address the prelates taking part. The meetings will continue each day for the next three weeks, with separate morning and afternoon sessions.

Besides the opening session, the meetings will be held behind closed doors, with no official release of the bishops' initial four-minute speeches or their responses to one another. The Vatican press office will instead hold daily briefings to divulge only the general themes of the issues discussed that day.

One hundred, eighty-five bishop, priest and brother voting members of the synod, primarily from those countries, are being joined in Rome for the synod by 80 non-voting lay experts and auditors, including 33 women, who can participate in the discussions but cannot vote on any final document or issues. 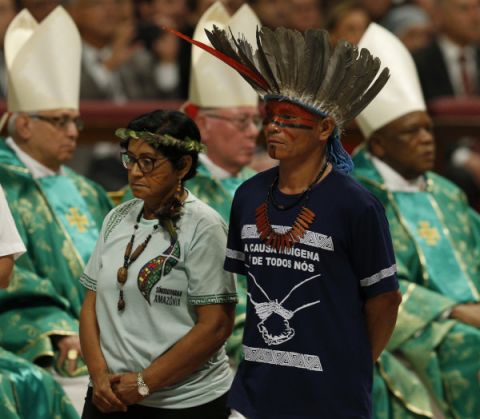 People walk to their seats after presenting offertory gifts to Pope Francis during the Oct. 6 Mass. (CNS photo/Paul Haring)

Several of the cardinals leading the synod have been forthright about the fact that it will at least consider the possibility of ordaining older married men as priests to address the severe lack of Catholic ministers across the Amazon.

Cardinal Claudio Hummes, the retired archbishop of Sao Paulo, Brazil, who is serving as the Amazon synod's relator general, pointed in an Oct. 3 briefing to the serious implications of Catholics currently living without frequent access to the sacraments.

The cardinal said that up to 80 percent of people in the region have "a limited sacramental life."

"Very few people receive the Eucharist and can have the celebration," he said. To emphasize the importance of receiving Communion for a Catholic, Hummes cited a 2003 encyclical by Pope John Paul II that said the church "draws her life from the Eucharist."

Among those attending the synod are 17 representatives of indigenous communities in the Amazon.

Towards the end of his homily Oct. 6, Francis lamented that the Catholic Church's work in the region had in the past involved "colonization rather than evangelization" and asked that God preserve the church "from the greed of new forms of colonialism."

Referencing the wildfires that spiraled out of control in the Amazon this summer, the pontiff said "the fire set by interests that destroy, like the fire that recently devastated the Amazon, is not the fire of the Gospel."

"The fire of God is warmth that attracts and gathers into unity," said Francis. "It is fed by sharing, not by profits."