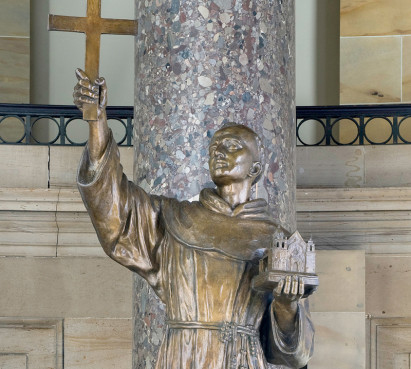 This statue of Father Junipero Serra was given to the National Statuary Hall Collection by California in 1931. (Architect of the Capitol)

When Pope Francis celebrates a canonization Mass at for a Spanish-American missionary later this month, he will do so in a language the new saint, Junípero Serra, would recognize: Spanish.

There’s a number of reasons for that, said Cardinal Donald Wuerl, the archbishop of Washington who will be hosting the pope on the Washington leg of his three-city U.S. visit later this month.

First, Spanish is the pope’s mother tongue, having been born in Argentina.

“But it’s also a recognition of how large the Hispanic population in the United States is,” Wuerl said. “And also because he is canonizing a Spanish speaker. And he’s coming as the first pope from the New World, and the language, the predominant language of the Western Hemisphere is Spanish.”

Hispanics make up one-third of the U.S. Catholic church. “They’re the biggest source of population growth in the church,” said Julia Young, a professor at the Catholic University of America, a pontifically chartered university in Washington, who has written about the history of Hispanic Catholics in America.

“But most Latinos and Hispanics, coming here from counties that are majority Catholic, are facing challenges to their Catholic identity. There have been a number of Pentecostal denominations that have been appealing to that community and have been making inroads,” she said. “So from the perspective of the institutional church, which obviously wants to keep people in the church, there’s a real need to reach out to the next generation of Latinos and make sure they’re becoming part of the church.”

The canonization Mass is also a reminder that “the Latino Catholic church in the United States is actually older than the United States itself,” Young said. “So as a historian, it’s interesting that this is a nod to the deep Latino history of Catholicism.”

Serra was born on the Spanish island of Mallorca in 1713, became a Franciscan friar, and sailed to Mexico in 1749. He later established a series of missions along the California coast. John Paul II set his cause for sainthood into motion by beatifying him in 1988, but his sainthood is controversial among some Native American groups for the sometimes coercive methods he used to convert tribes to Christianity.

The canonization Mass will be outdoors, at the Basilica of the National Shrine of the Immaculate Conception and the adjoining campus of the Catholic University of America. Tickets are being distributed by the archdiocese to parishes, mostly in the Washington area, and Wuerl said he’s had 10 requests for every ticket.

“I have found that I have far more dear friends that I ever realized,” he said. “So the balancing act is how do you get an equitable distribution of those seats. … That’s a good problem to have.”

“A huge, Mall-type Mass is not what the Holy Father was looking for” in Washington, Wuerl said. Instead, there will be an open-to-the-public Mass on the Benjamin Franklin Parkway in Philadelphia during the World Meeting of Families Sept. 27.

But if you’re one of the 25,000 people with a ticket to the Washington Mass and you don’t speak Spanish, be not afraid: “It will not be solely in Spanish. And we do intend to have the Jumbotron translation,” Wuerl said.