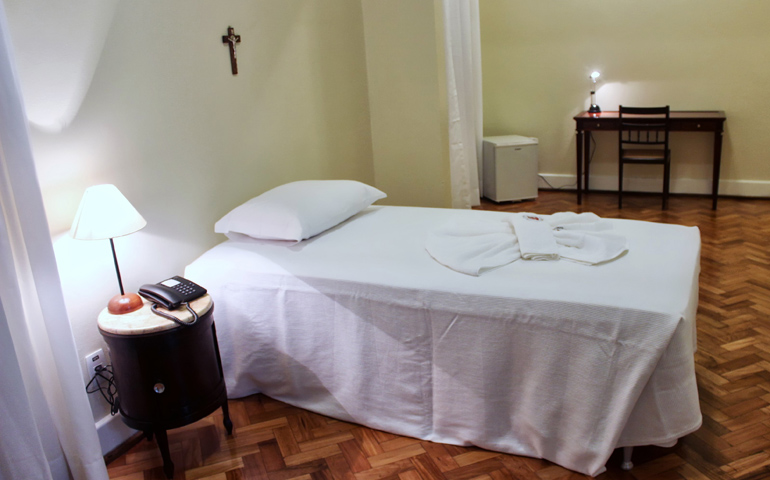 The bedroom Pope Francis will be staying in when he visits Brazil is a sparsely furnished one at the church-run Sumare Residence. The room is pictured in a handout photo from the Pontifical Council for Social Communications. (CNS)

Sweet and simple: that's the menu plan for Pope Francis when he stays at a church-run residence during his visit to Rio de Janeiro for World Youth Day.

However, Good Counsel Sr. Terezinha Fernandes, who is in charge of the kitchen at the Sumare Residence, said when she was dreaming up the dishes, "I had to hold myself back" to not let the table fare get too fancy.

Meals will consist of rice and beans and some Brazilian specialties like cheese bread and "doce de leite" -- a dessert made from carmelized sweetened milk, she told the Italian Catholic newspaper, Avvenire, Tuesday.

About 30 visiting cardinals will be staying at the same residence and eating from the same menu in the common dining room, she said.

Fernandes said they will be welcoming the pope "as he requested us to: with simplicity," but also with plenty of "boundless joy."

While the nun has vowed to keep things plain, another chef said she can't help herself and will probably make the pope splurge a little.

Monique Benoliel told Avvenire that when asked what he would like after celebrating the closing Mass July 28, the pope apparently requested just water.

"Well, this time, however, I am going to have to disobey him," she told the newspaper. She said it would be inconceivable to "not let the pope even try one of our tropical fruit juices."

The pope's room will be on the first floor of the two-story residence. The freshly renovated room with cream-colored walls has a single bed, a mini-fridge, a desk and chair, coat rack, rocking chair, nightstand and telephone.

"We hope Francis likes it," Fernandes told the paper.