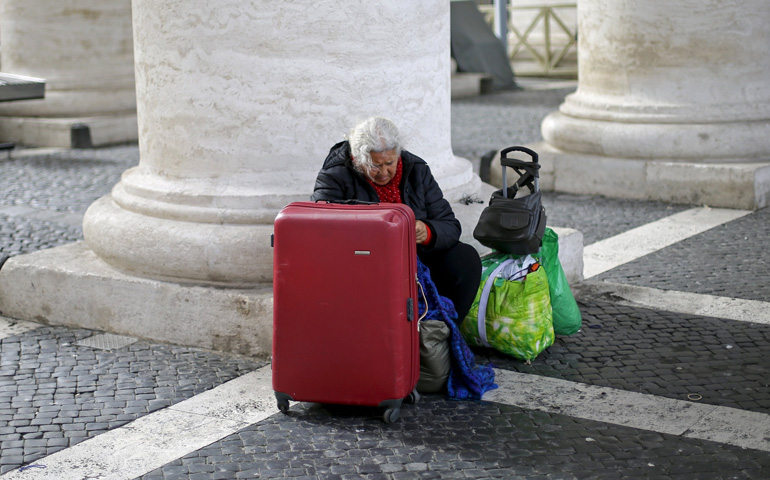 A homeless woman sits with her belongings near the Vatican on March 26. (CNS/Reuters/Max Rossi)

For an upcoming Vatican charity concert, Rome's immigrants, poor, elderly and marginalized will be getting front-row VIP treatment while benefactors will be seated in the back.

The charity benefit, to be held May 14 in the Vatican's Paul VI hall, will raise money for the papal Almoner's Office.

Local charitable organizations and parishes will be bringing about 2,000 people to the concert -- people without homes, refugees, immigrants and families and youth experiencing difficult situations, organizers said at a Vatican news conference April 30.

Those people will be given "a place of honor" at the front of the audience hall because "in them is Jesus and for him we reserve the front row," said Msgr. Diego Giovanni Ravelli, head of the Almoner's Office.

The concert on the feast of the Ascension is also open to benefactors, volunteers and others.

While tickets are free, seats open to the wider public in the back will have an empty envelope placed on them, asking people to make a donation to the papal charity.

Established in 1409, the Almoner's Office is the oldest existing papal charity and allocates small donations to individuals requesting assistance with expenses like medical or utility bills and rent.

Ravelli said his office received more than 8,000 requests for help last year and distributed more than 1.5 million euros ($1.68 million). The office allocates donations and gifts the pope receives as well as monies received from the sale of papal blessings.

The concert will be an opera based on Dante Alighieri's "The Divine Comedy." This year is the 750th anniversary of the medieval Italian poet's birth.

The opera, which features symphonic music, Gregorian chant and hard rock, was composed by Msgr. Marco Frisina, director of the choir of the diocese of Rome and a well-known composer of religious music.