Pope amends canons to give greater authority to bishops, conferences 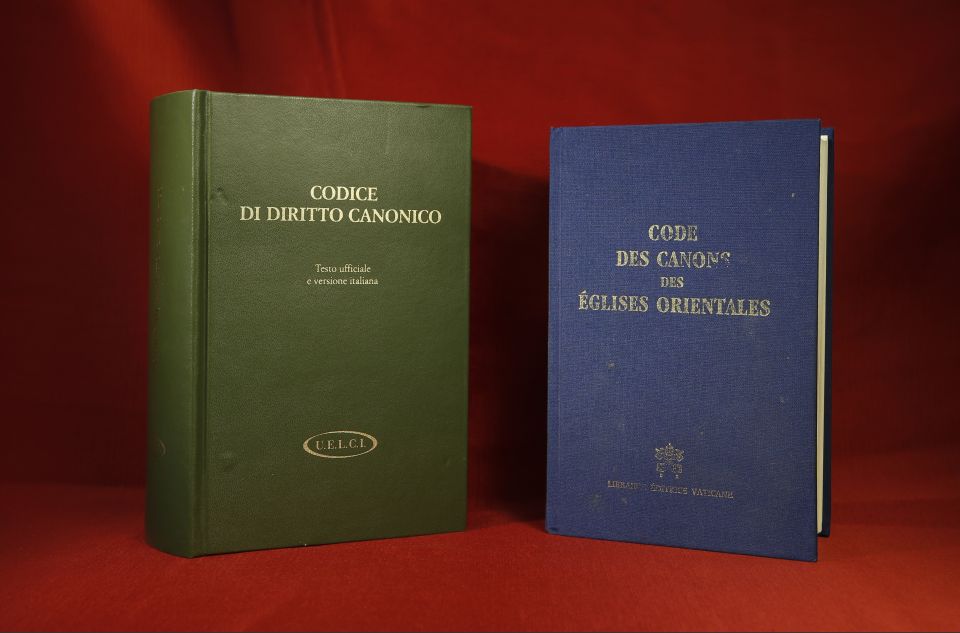 Code of Canon Law books for the Latin and Eastern Catholic churches are pictured in Rome at the Pontifical Oriental Institute in this Sept. 15, 2016. (CNS photo/Paul Haring)

VATICAN CITY — Saying he wanted to promote a "healthy decentralization" of some aspects of church life, Pope Francis made several changes to church law, granting greater authority to individual bishops, bishops' conferences and synods of bishops of the Eastern Catholic churches.

The changes, the pope said, should "foster a sense of collegiality and the pastoral responsibility" of bishops and religious superiors who are closest to the matters being decided and therefore have a better understanding of what is appropriate.

Pope Francis' amendments to both the Code of Canon Law of the Latin-rite church and the Code of Canons of the Eastern Churches were published by the Vatican Feb. 15, the day they were to go into effect.

The modifications, the pope said, "reflect even more the shared and plural universality of the church," which includes many legitimate differences, but preserves its unity in communion with the pope.

At the same time, he wrote, the changes "encourage a more rapid efficacy of the pastoral action of governance by the local authority, which is facilitated by its very proximity to the persons and situations which require it."

For setting up an interdiocesan seminary, drafting a program for the formation of priests or publishing a national catechism, with the new law the bishop or bishops' conferences involved simply need to obtain a "confirmation" from the Vatican and are no longer required to seek the "approval" of the Vatican.

In church law, "'approval,' as opposed to 'confirmation,' entails a greater commitment and involvement" of the Roman Curia. "Therefore, it is evident that the shift from requiring 'approval' to requiring 'confirmation' is not only a terminological change, but a substantial one, which moves precisely in the direction of decentralization," Bishop Marco Mellino, a member of the Pontifical Council for Legislative Texts, told Vatican News Feb. 15.

In another change, Pope Francis gave local bishops the authority to determine when there is "a just and necessary cause" for reducing the number of Masses to be said in fulfillment of a will or legacy left to the church. Previously such a decision was reserved to the Vatican.

Bishop Mellino told Vatican News the law still insists that donations left to the church be used for the donor's intentions, but recognizes that over time, especially if the money was left decades ago, adjustments may be necessary.

In addition, he gave religious superiors, when acting in consultation with their councils, broader authority for authorizing long absences from the community or for dismissing or accepting a request of a member with temporary vows to leave the community permanently.

New bank head has 'nothing to do' with arms trade, Vatican says

Full text of questions to Francis from women religious