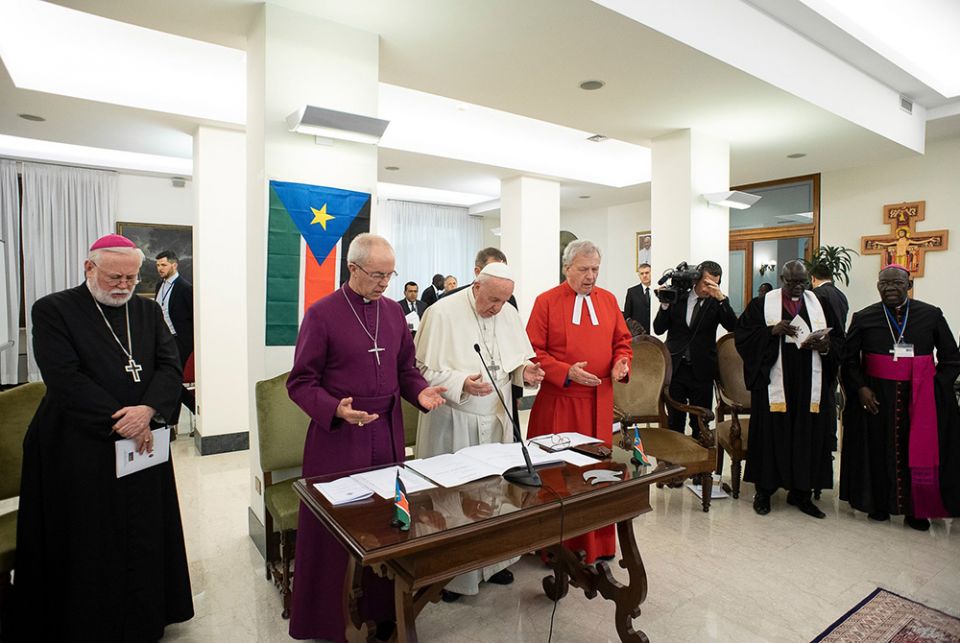 Pope Francis prays alongside Archbishop Paul Gallagher, the Vatican's foreign minister, Anglican Archbishop Justin Welby of Canterbury, and the Rev. John Chalmers, former moderator of the Presbyterian Church of Scotland, April 11, 2019, at the conclusion of a two-day retreat at the Vatican for the political leaders of South Sudan. Pope Francis, Archbishop Welby, and the Rev. Jim Wallace, moderator of the Church of Scotland, marked the 10th anniversary of South Sudan's independence July 9, and again promised to visit the country when it is at peace. (CNS/Vatican Media via Reuters)

Pope Francis, Anglican Archbishop Justin Welby of Canterbury and the Rev. Jim Wallace, moderator of the Church of Scotland, marked the 10th anniversary of South Sudan's independence and again promised to visit the country when it has a stable peace.

But to get to that point, the Christian leaders told South Sudanese politicians, "This may require personal sacrifice from you as leaders — Christ's own example of leadership shows this powerfully."

South Sudan was celebrating its 10th Independence Day July 9, but for the last eight years has been embroiled in a civil war. Nearly 400,000 people have been killed since December 2013 and about 4 million people have been displaced.

The civil war began in 2013 after President Salva Kiir dismissed Riek Machar, the first vice president, and their supporters began fighting one another. Since February 2020, Machar has returned to office, and the two are attempting to rule together.

The pope and the Anglican and Presbyterian leaders told the politicians, "We wish you to know that we stand alongside you as you look to the future and seek to discern afresh how best to serve all the people of South Sudan." 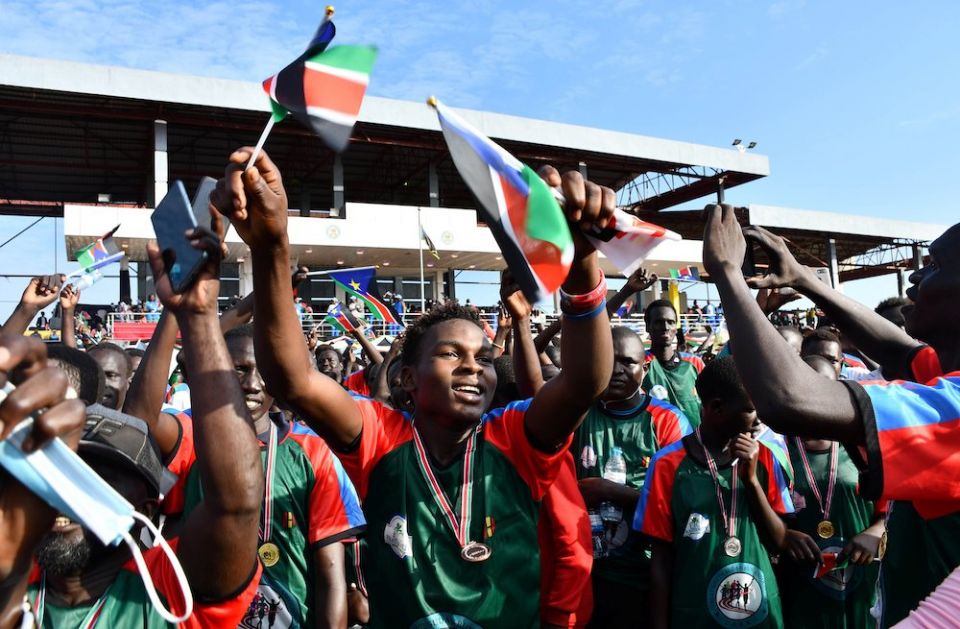 As they did in a similar message to the politicians at Christmas, the religious leaders remembered "with joy and thanksgiving" the April 2019 retreat, prayer and discussions the politicians had at the Vatican with Pope Francis and Archbishop Welby.

"Weighty promises" were made on the occasion, they said. "We pray that those promises will shape your actions, so that it will become possible for us to visit and celebrate with you and your people in person, honoring your contributions to a nation that fulfils the hopes" South Sudanese had at independence.

"Your nation is blessed with immense potential, and we encourage you to make even greater efforts to enable your people to enjoy the full fruits of independence," they said.

"When we last wrote to you at Christmas, we prayed that you might experience greater trust among yourselves and be more generous in service to your people," the letter continued. "Since then, we have been glad to see some small progress."

But, the religious leaders wrote, "sadly, your people continue to live in fear and uncertainty and lack confidence that their nation can indeed deliver the 'justice, liberty and prosperity' celebrated in your national anthem. Much more needs to be done in South Sudan to shape a nation that reflects God's kingdom, in which the dignity of all is respected and all are reconciled."

Caritas Internationalis, the Vatican-based umbrella organization for national Catholic charities, acknowledged the many and deep problems South Sudan faces as it tries to consolidate peace, promote reconciliation, feed the poor and promote development.

"To survive this young state will need international aid to build the nation through micro development programs in the rural areas where the land is still fertile. Without education, there will not be long lasting peace, and the country needs massive support to ensure aid for the integral health programs," Aloysius John, secretary-general of Caritas Internationalis, said in a statement July 9.

Gabriel Yai, director of Caritas South Sudan, said that with the signing of a peace treaty in 2018, the promise that members of the various armed factions would be trained to form a single national army and with the swearing in of members of parliament, the nation finally has a chance.

"This is the golden opportunity for the international community to help in nation building," Yai said in a statement distributed by Caritas Internationalis July 9. "Our country is more than ever in need of international political support to consolidate the political emancipation of leaders and to build a state army that will protect the people."

Get a pocket Bible, read it during your commute, pope recommends

Pope will go to Romania calling for unity, focus on the common good