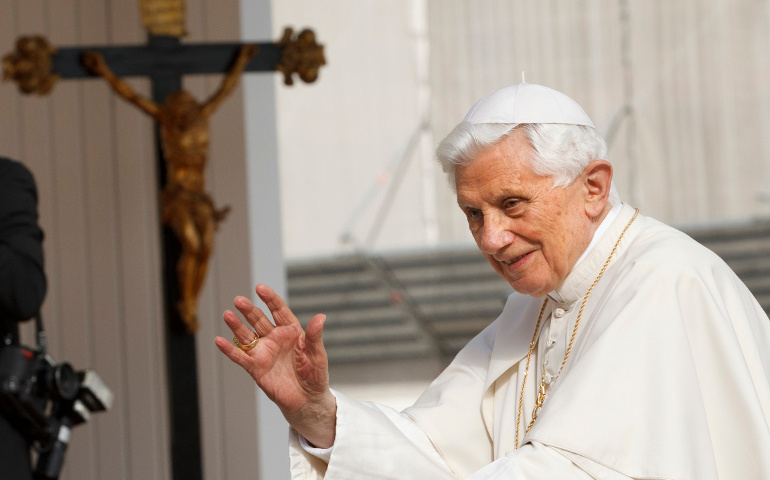 People need to become more familiar with the creed because it is there that the "Christian moral life is planted and ... one finds its foundation and justification," the pope said Wednesday at his weekly general audience.

Before an estimated 20,000 people gathered in St. Peter's Square, the pope began a new series of audience talks to accompany the Year of Faith, which marks the 50th anniversary of the opening of the Second Vatican Council.

He said he hopes the series of instructional talks, which is expected to run until Nov. 24, 2013, will help people "strengthen or rediscover the joy of faith and realize that it isn't something foreign to or separate from everyday life, but is its soul."

Pope Benedict said the widespread and dominant nature of today's secularism, individualism and relativism means that even Christians are not completely "immune from these dangers."

Some of the negative effects include faith being lived "passively or in private, a refusal to learn about the faith, and the rift between faith and life," he said.

"Often Christians don't even know the central core of their own Catholic faith -- the creed -- thereby leaving room for a certain syncretism and religious relativism," he said. Without a clear idea of the faith's fundamental truths and the uniquely salvific nature of Christianity, "the risk of constructing a so-called 'do-it-yourself' religion is not remote today."

He said the answer is the creed, or profession of faith, which needs to be better understood, reflected upon and integrated into one's life.

Christians need to "discover the profound link between the truths we profess in the creed and our daily life" so that these truths are allowed to transform the "deserts of modern-day life."

The Christian faith is not a belief in an idea or just an outlook on life, he said, but a relationship with the living person of Christ who transforms lives.

That is why having faith in God isn't merely an intellectual activity, but something that "truly changes everything in us and for us; it clearly reveals our future destiny, the truth of our vocation within history, the meaning of life and the pleasure of being pilgrims heading toward the heavenly home."

Pope Benedict said faith doesn't take anything away from one's life, rather it is what renders life more just and humane.

Current cultural changes "often show many forms of barbarity, which hide under the guise of victories won by civilization," he said. However, "wherever there is domination, possessiveness, exploitation, treating others as a commodity," and arrogance, humankind is "impoverished, degraded and disfigured."

Faith shows that humanity won't find its full realization unless the human person "is animated by the love that comes from God," he said. The gift of faith then finds expression in "relationships full of love, compassion, care and selfless service toward others."

Hundreds of pilgrims from Honolulu; Whitehorse, Canada; and Anchorage, Fairbanks and Juneau, Alaska, attended the general audience with their bishops. They were in Rome for the Oct. 21 canonization of Blesseds Marianne Cope of Molokai, Hawaii, and Kateri Tekakwitha, a Native American who was born in upstate New York and died in Canada in 1680.

The pope also marked International Day for the Eradication of Poverty, observed Wednesday, to promote greater awareness of poverty and destitution worldwide.

The pope encouraged those working to end poverty to "preserve the dignity and rights of everyone who is condemned to be subjected to the scourge of poverty."