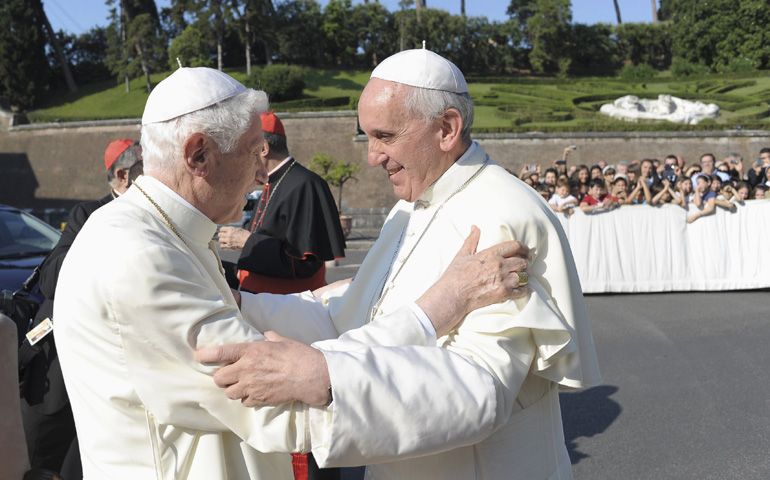 Vatican City — With retired Pope Benedict XVI sitting next to him, Pope Francis formally recited separate prayers to consecrate Vatican City to St. Joseph and to St. Michael the Archangel.

The early morning ceremony Friday in the Vatican Gardens featured the unveiling of a new statue of St. Michael, sculpted by Giuseppe Antonio Lomuscio. The project, along with a fountain by Franco Murer dedicated to St. Joseph, was initiated under Pope Benedict.

Pope Francis said the statue of St. Michael with his sword piercing the devil is "an invitation to reflection and prayer."

"Michael fights to re-establish divine justice," he said. "He defends the people of God from their enemies, especially the enemy par excellence, the devil."

The statue is a reminder that evil never wins, the pope said. The devil's head is "crushed, because salvation was accomplished once for all with the blood of Christ."

"In consecrating Vatican City to St. Michael the Archangel, we ask him to defend us from the evil one and cast him out," the pope said. "We also consecrate Vatican City to St. Joseph, the guardian of Jesus, the guardian of the Holy Family. May his presence make us even stronger and more courageous in giving space to God in our lives in order to always overcome evil with good."

In his prayers for the formal consecrations, Pope Francis asked St. Joseph to "watch over and give peace to this land bathed by the blood of St. Peter," increase the faith of Vatican employees and visitors and strengthen the vocations of all the "bishops, priests, consecrated women and lay faithful who work and live in the Vatican."

In the prayer to St. Michael, Pope Francis asked the archangel to help ensure that the Vatican be a place of fidelity to the Gospel and the "exercise of heroic charity."

He also prayed that St. Michael would intercede to help "make us victorious over the temptations of power, riches and sensuality" and keep Vatican employees strong in "the good fight of the faith."

Cardinal Giovanni Lajolo, retired president of the commission overseeing Vatican City State, told those assembled for the prayers that Pope Francis had decided that both his coat of arms and Pope Benedict's should be on the plaque marking the dedication of the statue of St. Michael. It also is inscribed with the date, including the notation that it was made during the eighth year of Pope Benedict's pontificate and the first year of the pontificate of Pope Francis.

To meet a displaced person is to encounter Christ, pope says

Cardinal Parolin: Vatican's deal with China to be renewed this week