Pope Francis and the road map of a St. Joseph pontiff 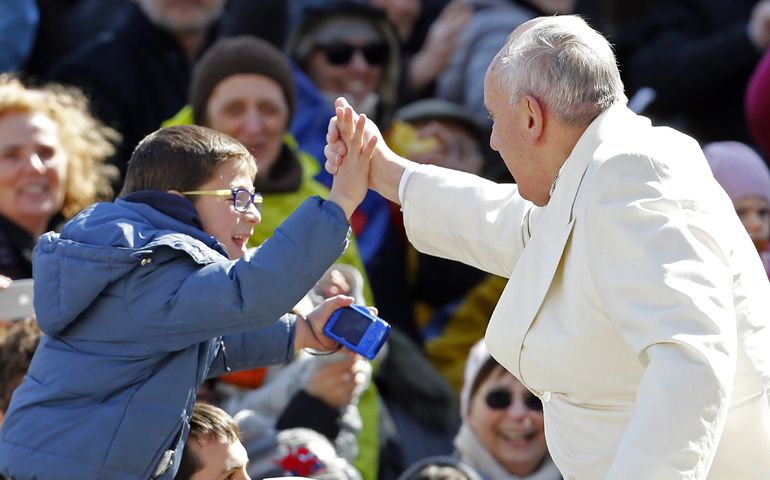 Pope Francis greets a child as he arrives to lead an audience March 7 with the Communion and Liberation movement in St. Peter's Square. (CNS/Reuters/Giampiero Sposito)

Much of the analysis of Pope Francis during his two years as leader of the Roman Catholic church has focused on two key aspects: He is a member of the Jesuit religious order, and he has named his papacy in honor of the 13th-century saint of the poor, Francis of Assisi.

But there's a third connection with which the pope's ministry is inextricably tied: that with St. Joseph, husband of Mary and foster-father of Jesus.

Officially inaugurated into his Petrine ministry on March 19, 2013, Francis celebrates the anniversary of his papacy each year on the day the church celebrates Joseph's feast day.

Francis has made the connection between him and Joseph publicly many times. During his visit to the Philippines in January, he told families there that he keeps a little statue of the saint on his desk.

Sometimes, the pope said, he writes problems he's having on pieces of paper and tucks them under the statue so Joseph can dream over them for him.

Within months of his election, Francis also permanently amended the eucharistic prayers used at most Catholic Masses to include Joseph's name along with Mary's.

But the connection between pope and father also seem almost like a papal road map.

In the homily at his inauguration Mass -- held just six days after his surprise election as pope on March 13, 2013 -- it seems now that Francis outlined a whole vision for what was to come in his papacy.

The keys to that vision? A pope that acknowledges the limits of his power, ties that power completely to service, and focuses most -- like Joseph -- on being a protector of those he leads, of his family.

Outlining the papal role two years ago, Francis said: "Let us never forget that true power is service." The pope, he said, "must be inspired by the lowly, concrete and faithful service which marked St. Joseph."

"Like him," Francis continued, "he must open his arms to protect all of God's people and embrace with tender affection the whole of humanity, especially the poorest, the weakest, the least important."

"Only those who serve with love are able to protect," the pope said.

Two years in, the image of a pope that is like a father with open arms seems accurate. Francis is known for the multitude of images of him embracing people of all kinds -- the differently abled, the economically impoverished, children.

But what does it say about the two years (or more) ahead?

One aspect from his inaugural homily that Francis seems likely to address soon is care of creation.

Speaking two years ago on Joseph's role as a protector, the pope said such a role is not just Christian but "has a dimension that precedes and is simply human, regarding all."

"It is the protection of creation, the beauty of creation, like it is told to us in the Book of Genesis and like we have seen St. Francis of Assisi: It is to have respect for every creature of God and for the environment in which we live," he said.

"In the end, everything is entrusted to the protection of humanity, and it is a responsibility that regards us all," Francis continued.

"May we be protectors of the gifts of God!" he called on the some 200,000 people and 131 delegations of global governments gathered in St. Peter's Square.

As we await the publication in June or July of Francis' next encyclical letter, which is to focus on ecology and protection of the environment, we wait to see just how the pope will fulfill the mission he set out for himself two years ago.

That was a mission to be a Jesuit and Franciscan in the mold of the Joseph who protects all -- person, animal and environment alike.

Vatican | Pope Francis and the road map of a St. Joseph pontiff

Pope’s quotes: Pray for the synod

Church and society must learn from families, pope says at audience

Clerical identity crisis: Flock and pasture can't tell shepherd who he is