Pope Francis to be featured in new Netflix documentary about seniors 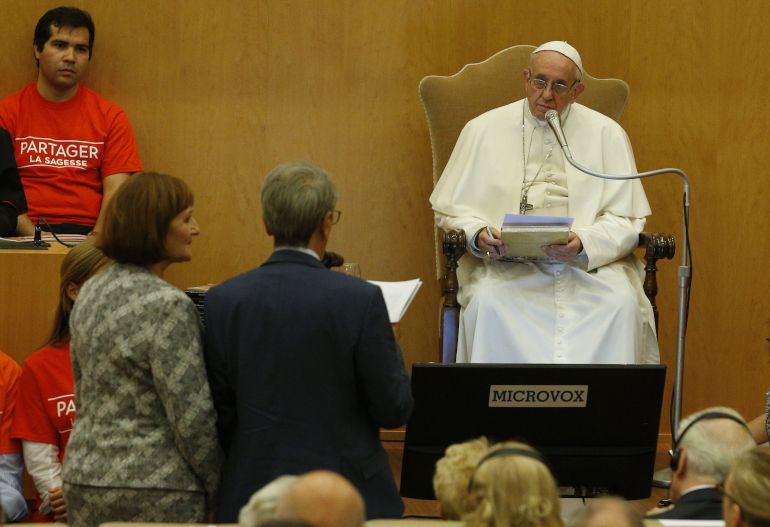 Pope Francis listens as a couple asks a question during the release of the book, "Sharing the Wisdom of Time," in Rome in October 2018. (CNS photo/Paul Haring)

Rome — Pope Francis will be featured in a new Netflix documentary series focused on sharing the voices of senior citizens around the world, which is set for release in 2021.

Based on the 2018 book Sharing the Wisdom of Time, in which the pontiff responded to stories from 31 seniors, the series will include new on-camera interviews with Francis offering his thoughts on aging and other themes.

Loyola Press, which published the original volume, announced the news Dec. 16 in a release to NCR. It said the film would center on the stories of the seniors included in the book, "told through the eyes of the younger generation, talented young filmmakers under the age of 30 residing in the elder's country."

"We were so thrilled to publish the book Sharing the Wisdom of Time to support Pope Francis's efforts in ensuring that elders are seen and heard, especially by young people," Joellyn Cicciarelli, president and publisher at Loyola Press, told NCR.

"This docuseries takes our mission one step further — meeting young people where they are, through media — and inviting them to find their own ways to connect with and learn from elders in their own families and neighborhoods," said Cicciarelli.

Loyola Press said Francis, who turns 84 this week, will be "heavily featured" in the documentary, and will reflect on the stories shared by the seniors "as well as provide his own commentary on themes such as love, struggle, work and dreams."

Francis has been the subject of several documentary projects since his election as pontiff in March 2013. The pope was most recently featured in Russian filmmaker Evgeny Afineevsky's project "Francesco," which caused controversy by the way it edited together previously recorded clips of earlier comments by Francis about same-sex civil unions.

The essays in the Sharing the Wisdom of Time book were originally curated by Jesuit Fr. Antonio Spadaro, editor-in-chief of Italy's La Civiltà Cattolica periodical and a close advisor to Francis.

The pope often mentions the need for society to better focus on the needs of senior citizens, and frequently exhorts young people to get to know their grandparents. During his 2015 visit to the U.S., for example, he told crowds in Philadelphia to recognize that grandparents carry "the memory of the past."

Tom McGrath, one of the lead editors and a featured senior in the 2018 book, told NCR that he hoped the new documentary series could help "foster the alliance between old and young that Pope Francis has been calling for."

The new series is being produced by Italy's Stand By Me productions, known for a number of popular TV programs including the Italian version of the reality show "16 and Pregnant."

Buckle up for Francis' third year

Francis renews abuse commission but does not reappoint six members

Why resignation may mean a conclave open to change