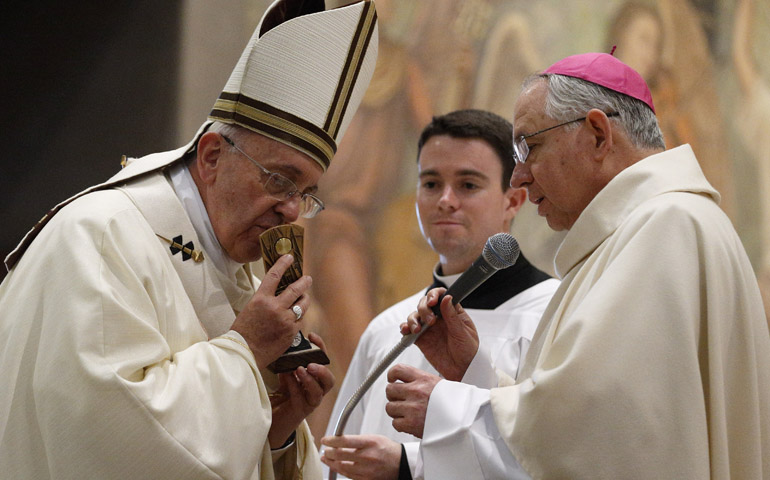 People seem to enjoy finding the shortcomings of candidates for sainthood like Blessed Junipero Serra, but they should ask themselves if they would have his generosity and courage to leave everything behind to care for the poor and bring them the Gospel, Pope Francis said.

Visiting the Pontifical North American College, the U.S. seminary in Rome, Pope Francis said Serra fits into a host of saints who shaped the history and culture of the Americas, particularly by spreading Christianity, caring for the poor and defending the oppressed.

The pope's Mass on Saturday with 250 seminarians from more than 100 U.S. dioceses, as well as Australia and Canada, came at the end of a symposium on Serra organized by the seminary, the Pontifical Commission for Latin America, the Los Angeles archdiocese and the Knights of Columbus.

Although the college is on the Janiculum Hill overlooking the Vatican, Pope Francis' was the first papal visit to the campus since 1980, when St. John Paul II went.

Pope Francis is scheduled to canonize Serra, the 18th-century Spanish missionary to California, during his September trip to the United States. "This meeting at your college and around the eucharistic table is a beautiful and meaningful introduction to my apostolic trip to the United States of America," he told the students, staff, bishops and cardinals at the Mass.

Giving his homily in Italian, Pope Francis noted how Spanish missionaries in the 16th century had preached the Gospel across what is now the southern and southwestern United States from Florida to California. "This was long before the pilgrims of the Mayflower reached the North Atlantic coast," he noted.

While critics of the canonization have claimed that Serra was part of a system that destroyed native cultures and that he abused Native Americans at his missions, Pope Francis said Serra, like other Catholic missionaries in the Americas, "defended the indigenous peoples against abuses by the colonizers."

Referring to the Franciscan missionary as "Fra Junipero," Pope Francis said the Spaniard was motivated by a desire to share the Gospel with the indigenous peoples of the Americas.

"He was filled with joy and the Holy Spirit in spreading the word of the Lord," the pope said. "Such zeal excites us, it challenges us!"

People study the lives and works of the missionaries, he said. They look at their strengths and, unfortunately, especially "their weaknesses and their shortcomings."

"But I wonder if today we are able to respond with the same generosity and courage to the call of God, who invites us to leave everything in order to worship him, to follow him, to rediscover him in the face of the poor, to proclaim him to those who have not known Christ and, therefore, have not experienced the embrace of his mercy," the pope said.

The witness of Serra, he said, is a call for all Catholics to get personally involved in missionary activity across the Americas, motivated by "the joy of the Gospel."

Referring to Serra as "one of the founding fathers of the United States" -- his missions were settlements that grew into some of the major cities of what is now the state of California -- Pope Francis said the Franciscan is a reminder of the important role the Spanish had and their descendants continue to have in the U.S. Catholic community.

Serra is part of a long line of holy men and women who preached and lived the Gospel of charity in the Americas, he said, listing two dozen male and female saints who ministered everywhere from Canada to Chile. He included the indigenous "humble workers in the vineyard of the Lord, like Juan Diego and Kateri Tekakwitha," as well as "martyrs like Roque Gonzalez [a Jesuit killed in Brazil in 1628], Miguel Pro [a Mexican Jesuit killed in 1927] and Oscar Arnulfo Romero," the assassinated archbishop of San Salvador, who is scheduled to be beatified May 23.

"There has been holiness in America -- much holiness," Pope Francis said. "May a powerful gust of holiness sweep through all the Americas during the coming extraordinary Jubilee of Mercy."

Pope Francis, the first pope from the Americas, prayed that "the life of our American continent may be rooted ever more deeply in the Gospel it has received; [and] that Christ may be ever more present in the lives of individuals, families, peoples and nations, for the greater glory of God."

"We pray, too, that this glory may be manifested in the culture of life, brotherhood, solidarity, peace and justice, with a preferential and concrete love for the poor," he said.

As is customary, Pope Francis asked the congregation at the college to pray for him and he entrusted his July trip to South America and his September trip to Cuba and the United States to the protection of "Our Lady of Guadalupe, Fra Junipero and all the American saints."