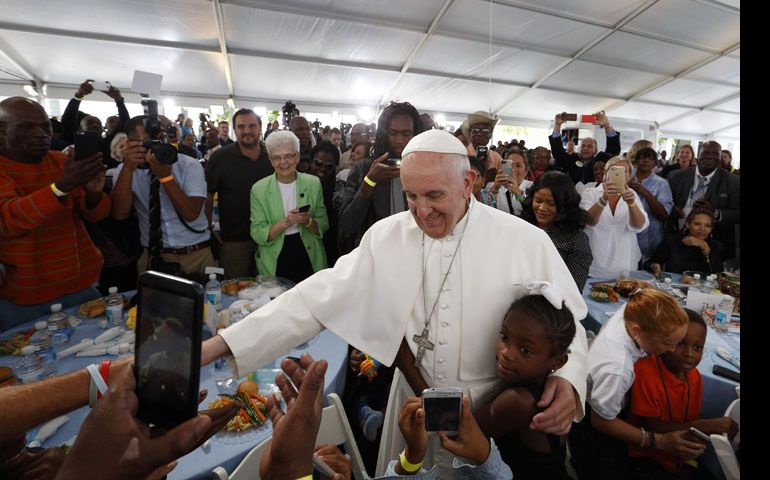 A girl hugs Pope Francis as he visits with people at St. Maria's Meals Program of Catholic Charities in Washington Sept. 24. (CNS photo/Paul Haring)
This article appears in the Francis in the United States feature series. View the full series.

Washington — Pope Francis went straight from charging the U.S. Congress to care for the neediest to blessing and encouraging Washington's hungry and homeless on Thursday Sept. 24.

Still, Francis, wearing his cross showing a shepherd and his flock, carried a political message along with his pastoral mission.

"The Son of God came into this world as a homeless person," he told staff and clients of Catholic Charities, at St. Patrick's in the City's ministry to the needy.

"The Son of God knew what it was to start life without a roof over his head," he said, speaking in Spanish.

Francis told them that while "we can find no social or moral justification, no justification whatsoever, for lack of housing … we know that God is suffering with us, experiencing them at our side. He does not abandon us."

And he assured them that all are equal in prayer. "Faith makes us open to the quiet presence of God at every moment of our lives, in every person and in every situation. God is present in every one of you, in each one of us."

At the adjacent headquarters of Catholic Charities, the pope paused briefly to bless the agency's chapel and moved out to the moment that may have been the real highlight of the shepherd's day — greeting the homeless clients who come there weekly for a meal from St. Maria's Meals Program.

The location is marked by a statue known as the "Homeless Jesus" — identified by the nails in the statue's feet, said Monsignor John Enzler, president of Catholic Charities at the Archdiocese of Washington. The poor call it "our Washington monument, our sign of dignity," he said.

The street-side soup kitchen was set up with 55 white tablecloth-covered tables and floral centerpieces where families were served a hot lunch. There, Francis blessed little children, posed for selfies and, with open arms and a smile, called out "Buon appetito!"

The mobs of dignitaries and media that usually crowd the pope were mostly kept at bay, although Washington's mayor, Muriel Bowser, was there.

"The pope made it very clear this is a pastoral event," at which he could walk with people and come in close for hugs and handshakes, said Enzler.

National Catholic Reporter columnist Michael Sean Winters noticed that the pope could have lingered with the nation's elite. But, "like Jesus, he chose to seek out the powerless and the poor. Like Jesus, he seemed to be more joyful at the latter destination."

Francis has directly taken up care for the homeless and the refugee back in Rome.

He recently called on every European parish to support at least one family from the hundreds of thousands fleeing the Middle East and North African violence, and Vatican City has already taken in a family from Damascus.

And in February, he asked that showers be set up for homeless people under the colonnade of St. Peter's Square. The Vatican's charity office also began offering haircuts and shaves by professional volunteers, as part of the shower service.

A haven for the poor in Margaritaville