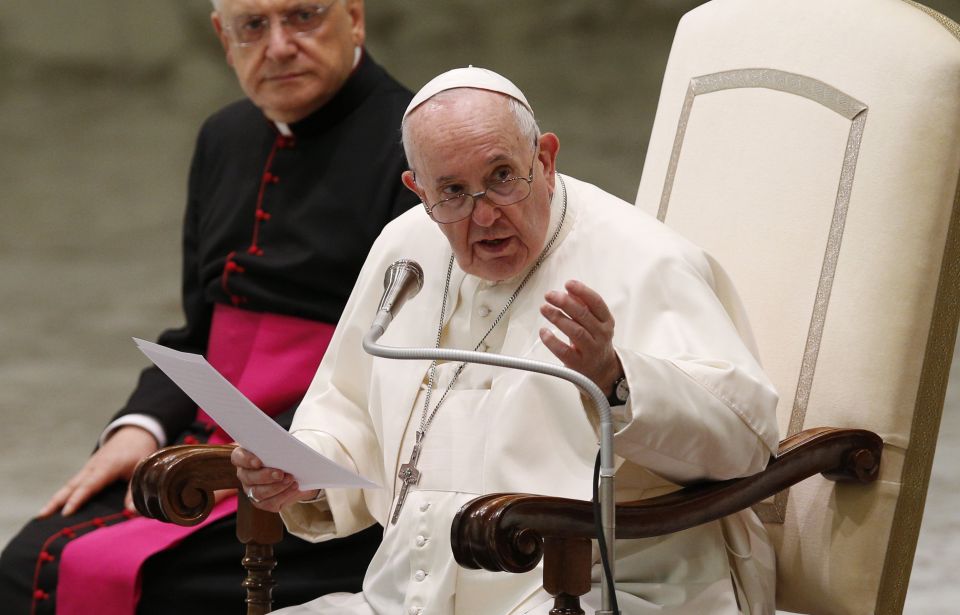 Pope Francis offers a message to Catholics in France during his general audience in the Paul VI hall at the Vatican Oct. 6, 2021. The pope's extemporaneous remarks came as the church in France confronts a report on sexual abuse that estimates 216,000 children were abused by priests since 1950, and more than 100,000 others were abused by lay employees of church institutions. (CNS photo/Paul Haring)

ROME — Pope Francis has expressed his personal "shame" following the release of a devastating report into abuse in the Catholic Church in France, saying the church had failed to put victims at the center of its concerns.

"Unfortunately, the numbers are considerable," said Francis during his general audience on Oct. 6 in response to the report released a day earlier.

"I wish to express to the victims my sadness and sorrow for the trauma they have suffered," Francis continued. "And also my shame, our shame, my shame for the church's too long inability to put them at the center of its concerns."

The Independent Commission on Sexual Abuse in the Church, which was volunarily commissioned by the French bishops' conference, found an estimated 330,000 children were victims of sex abuse within France’s Catholic Church over the past 70 years at the hands of some 3,000 priests and church officials.

"This is the time of shame," said Francis, who went on to assure the victims of his prayers.

"I encourage the bishops and superiors and religious to continue to make every effort so that similar tragedies will not happen again," he pleaded.

Similar to reports released in Australia, Ireland, the United States and elsewhere in recent years, the French report's findings are expected to lead to a reckoning among Catholic institutions in France. The country's leading newspaper, Le Monde, responded to the report by calling on the church to "modify its mode of governance, its formation and prevention processes," including its requirements for clerical celibacy and its prohibition of the ordination of women.

Following the report's release, the president of the French bishops' conference, Archbishop Eric de Moulins-Beaufort, said the country's Catholic bishops were "appalled" by the study's findings and vowed reform.

Francis echoed that assessment on Oct. 6, describing this period as "hard but healthy."

"I call on French Catholics to assume their responsibilities to ensure that the Church is a safe home for all," Francis concluded.

Pope calls dicastery to promote reflection on role of women