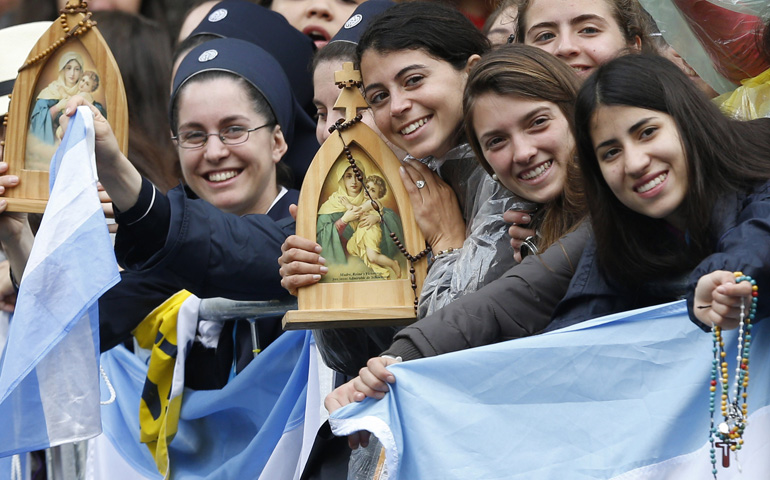 World Youth Day pilgrims hold rosaries and icons as they wait for Pope Francis to arrive to the Municipal Theater on July 27 in Rio de Janeiro. (CNS/Paul Haring)

by Michelle A. Gonzalez

This is the fourth in a series of articles examining Pope Francis' recent interviews. A new article will be published each day this week on NCRonline.org.

On March 13, I stood with the crowds in St. Peter's Square, waiting to participate in history. It was very difficult to be cynical in such an exuberant crowd, yet I will confess I was nervous and wary as we waited for "the name" to be read. When Jorge Mario Bergoglio was announced, the sound was muffled; many of us only heard the name Francesco. A sense of dread crept into me, trying to digest the election of another European pope. Then slowly, the crowd realized who the new pope was and started screaming joyously for the Latin American church.

The same skepticism has accompanied me over the last few months. As a Cuban-American who focuses her research on Latin American and Latino/a Catholicism, I felt great personal and professional joy at the election of our first Latin American pope. Yet while I watched the many gestures of humility by Pope Francis, I could not help but want more. These moments were important, but I, like some others, wanted a change. I did not have to wait for long. With his interview published last week, Francis revealed that these moments of personal transformation go hand in hand with a call for a broader social transformation of the church as a whole.

Many statements from this interview stand out to me. When Francis revived the image of the "people of God" in his understanding of the church, he reminded us of the interconnectedness of all of humanity. We do not encounter the sacred alone but within community, and God encounters us through participation in this community. This community includes laypeople of all ages, from the youth he encountered in Brazil to elders like his abuela Rosa. This image is coupled with his rejection of the image of the church as a small chapel that only holds an elite few. Because the church is not solely for the elites, the hierarchy, even the pope himself, must enter into dialogue with the people of God. All are equally invited, not just theological experts and clergy.

Francis not only rejects an elitist church; he also rejects the reduction of Catholicism to hot-topic moral issues. He does not want to reduce the church to discussions of abortion, gay marriage, contraception and homosexuality. In his comments, he makes a distinction between dogmatic and moral teachings, reminding us that they do not hold the same weight.

Yet perhaps it is my previous work on religion and gender or the fact that I never thought I would live to read a pope say the word machismo, but his comments on "female machismo" stood out as his most provocative statement. Francis rejects a female machismo grounded in an essentialist vision of men and women. Machismo is the Spanish word used to describe the particular incarnation of sexism in Latino/a and Latin American communities. It is often mistranslated to mean "macho" or "manly." This is not the case. While it has a history of evoking chivalry and gallantry, today in Spanish, it is most often used to describe the patriarchal structure of life in Latin America.

By evoking the word machismo, Francis is not only taking a critical stance against social hierarchy; he is also reminding us of his Latin American roots. He is rejecting this patriarchal, essentialist understanding of women that limits their full humanity and the full humanity of men as well, reducing them to gender stereotypes. Francis does not take a dismissive stance toward the chorus of grass-roots, pastoral and academic women who have for decades begged the church to be more open to the notion of women's authority in the church. Rejecting machismo is a rejection of patriarchy and its limited construction of women's voice and authority. Francis calls us into a deeper conversation about the authority of women grounded in a theology of women. This will lead, he seems to imply, to finding an authoritative role for women.

I have heard the chorus of skeptical voices -- some in my head, I will admit -- that say even this is not enough. Some argue that Francis is not saying anything essentially new. He is merely reiterating what the tradition contains. The shift is only in emphasis. Others claim that this is not enough after women have been marginalized for centuries in the Roman Catholic church. This is no revolution. And yet it is. Francis is calling us to enter into a dialogue and to enter it humbly. When he describes himself as a sinner in the beginning of his interview, he is reminding all of us that we are sinners, as well.

I was discussing the pope's interview with a few friends the other night, particularly in light of my own theological views. I asked, "What is a feminist Catholic theologian to do when she agrees with the pope on gender?" A range of responses followed, most humorous in tone. Yet all joking aside, what I am left with is hope. I can hope that this a new dawn in the history of the church, one in which we are all invited into dialogue together. It is a conversation among theologians, laypersons, bishops, the pope, abuelas and youth, for we are the people of God.

Tuesday: "It will be hard to go backward after Francis' papacy," by Richard Rohr

[Michelle A. Gonzalez is associate professor of religious studies at the University of Miami.]

A version of this story appeared in the Oct 11-24, 2013 print issue under the headline: A rejection of machismo.