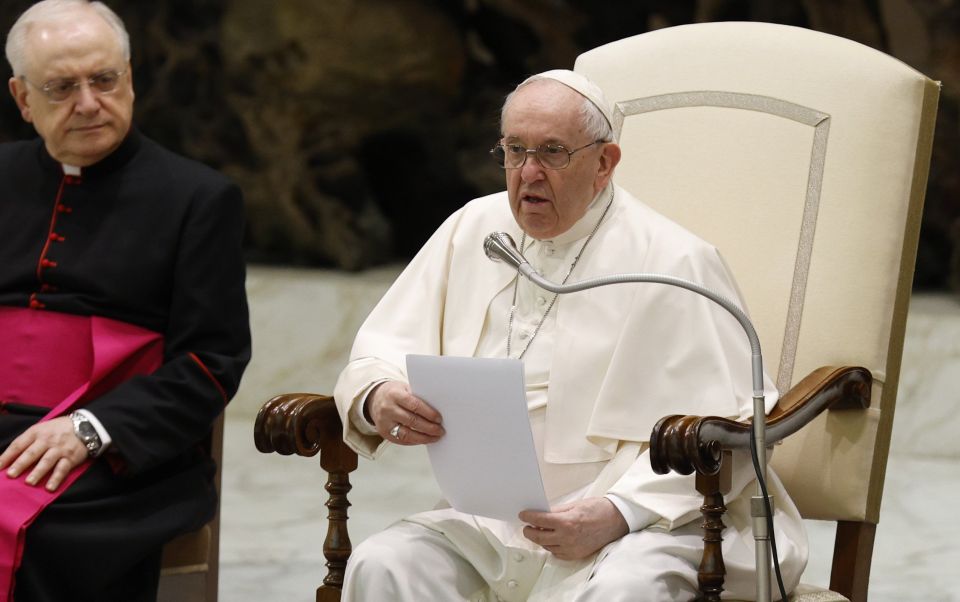 Pope Francis speaks during his general audience in the Paul VI hall at the Vatican Feb. 23, 2022. (CNS photo/Paul Haring)

ROME — Pope Francis has canceled his Feb. 27 visit to Florence and a planned celebration of an Ash Wednesday Mass on March 2 due to knee pain.

A Feb. 25 statement from the Vatican said the pope's doctor had prescribed a period of rest for his leg, but did not specify when the pope would again engage in public activities.

This marks the first time the 85-year-old pope has been forced to cancel travel plans due to health concerns, though he has previously had to bow out of planned Mass celebrations due to minor illnesses.

In July, Francis experienced the first major health crisis of his nearly nine-year papacy when he was hospitalized for a 10-day period after having intestinal surgery.

Since then, some of his closest advisors have described the pope to be in "good health." In January, the pope forewent his customary greeting among the audience members at an audience in Rome, saying he wanted to avoid the stairs due to an inflammation of his right knee.

Francis had planned to travel to Florence to participate in the closing day of a meeting of bishops and mayors from the Mediterranean and to preside over a Mass for the start of the season of Lent at the Basilica of Saint Sabina on Rome's Aventine Hill on March 2.

The pope has called for Ash Wednesday to serve as a day of prayer and fasting for peace in Ukraine.

Francis' next major travel plans are just over a month away, when he is scheduled to travel for a two-day trip to the Mediterranean island nation of Malta.

Work, prayer-life balance: Even a cardinal must find a way

Pope says judgments on annulments must be impartial and pastoral

Yazidis thank Pope Francis for his support at Vatican meeting