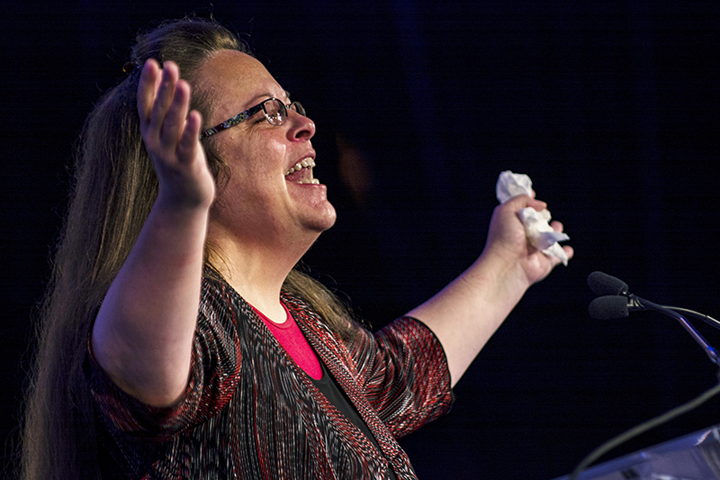 Kentucky’s Rowan County Clerk Kim Davis, who was jailed for refusing to issue marriage licenses to same-sex couples, makes remarks after receiving the “Cost of Discipleship” award at a Family Research Council conference in Washington on Sept. 25, 2015. (Reuters/James Lawler Duggan)

Throughout his just-concluded visit to the U.S., Pope Francis was careful to avoid many of the hot-button social issues that have roiled American society. He repeatedly exhorted his bishops to take a more positive approach and not pick fights that would turn more people off than they would attract.

Now it turns out that even as he was preaching that message the pope met secretly with an icon of the culture wars: Kim Davis, the Kentucky clerk and conservative Christian who was jailed for five days in early September for refusing to issue marriage licenses for gay couples because she said it conflicted with God's law.

Mat Staver of the Liberty Counsel, which has been representing Davis, told CBS News that the Vatican contacted him a few days before the pope was to arrive on his historic visit, his first to the U.S., because Francis had been following Davis' saga "and obviously is very concerned about religious freedom not just in the United States but worldwide."

Despite the blanket media coverage of every move the pope made during his visit, which ended Sunday night, Staver said he worked with church officials to sneak Davis and her husband, Joe, into the Vatican embassy in Washington where Francis was staying.

They arrived in an SUV, he said, and Davis hid her distinctive long hair "in a different way because her hair is very recognizable from the mug shot."

The meeting took place about 2:30pm, Staver said, and lasted between 10 and 15 minutes.

According to Inside the Vatican magazine, which first broke the story, the Argentine pope spoke in English with Davis and her husband, alone and without an interpreter or aides. Staver said he was not present either.

Davis told the magazine that Francis said to her, "Thank you for your courage."

"I said, 'Thank you, Holy Father,'" Davis reportedly said. "I had asked a monsignor earlier what was the proper way to greet the pope, and whether it would be appropriate for me to embrace him, and I had been told it would be OK to hug him. So I hugged him, and he hugged me back.

"It was an extraordinary moment. 'Stay strong,' he said to me. Then he gave me a rosary as a gift, and he gave one also to my husband, Joe. I broke into tears. I was deeply moved.

Inside the Vatican editor Robert Moynihan, who has covered the Vatican for years, said Davis recounted the meeting to him shortly after it took place.

The meeting would seem to be a stunning coda to the pope's visit, which may be one reason why the Vatican on Wednesday seemed eager to avoid engaging it further.

It was only after repeated requests that the Vatican offered a response. In an email in Italian to Vatican journalists, Vatican spokesman Jesuit Fr. Federico Lombardi wrote, "I do not deny that a meeting may have taken place, but I do not have comments to add." (NCR’s translation.)

Staver said the Vatican had promised to release photos of the pope and Davis on Wednesday.

Throughout the trip, Francis seemed to studiously avoid political landmines and repeatedly urged his bishops to avoid harsh language and culture war battles — and the Kim Davis case has been one of the year's biggest rallying cries for the religious right.

Francis frequently mentioned religious freedom but in a different context and with a different tone from the sharper, more politicized rhetoric deployed by cultural conservatives in the U.S.

Also, even though Catholic leaders have made religious freedom a top priority, the Davis case has not been a banner issue for them because, as a government official sworn to uphold the law, her claims to conscientious objection and religious liberty are not seen as very strong.

Religious freedom advocates note that Davis is a government official herself who is sworn to uphold the law, and a conscientious objector would normally resign or find an accommodation to allow someone else to carry out that function.

Francis did meet while in Washington with the Little Sisters of the Poor, the nuns who operate nursing homes throughout the U.S. and are engaged in a fierce legal battle with the Obama administration over the health care law's contraception mandate.

The Vatican released photos of that unscheduled visit and it seemed aimed at backing both the sisters and the bishops, who strongly support nuns and their religious freedom claims.

How the Davis meeting with Francis came about, however, is a mystery.

"We did not want to release the information up to this time, nor did the Vatican, because the Vatican wanted to focus its message on a lot of issues (during the papal visit), and at the right time we ultimately released the information and the Vatican gave us the opportunity to do so," Staver said.

He said that while Davis' team wanted to broadcast news of the meeting right away, they also knew it would overshadow the "broader message" Francis wanted to bring to the U.S. Francis returned to the Vatican early Monday morning.

But now progressives -- and many church insiders in the U.S. -- are shocked, and conservative activists are ecstatic.

The latter say that the meeting with Davis shows that the pope's visit was in fact primarily aimed at supporting their religious freedom cause.

"The pope's amazing private action shows that his public drumbeat on religious freedom was no afterthought. It was at the heart of his mission to the United States," Matt Bowman, senior counsel at the Alliance Defending Freedom, wrote on the group' website.

Staver said that the meeting with Davis showed not only that Francis is concerned about religious freedom, but that the message was "completely embedded in what he said" during the trip.

"The pope's visit to the United States I think was very successful and he got his messages out, and his themes out, and he's laid those out, and we've had a couple of days for those to resonate and to percolate through out the country, and frankly throughout the world," Staver told CBS.

"And I think now is a good time to get the additional message" out, he added.

Davis and her husband had come to Washington last week to receive a "Cost of Discipleship" award on Friday from the Family Research Council, a leading conservative Christian advocacy group, in recognition of her stand against gay marriage.

Davis, 49, whose mother is Catholic, identifies as an Apostolic Christian, a Pentecostal denomination. She has been married four times but said she had a religious awakening several years ago.

A federal judge jailed Davis earlier this month over her refusal to issue marriage licenses with her name on them to same-sex couples in her county. Davis also refused to allow clerks in her office to issue licenses. She cited the Bible as the basis of her opposition, saying God's law superseded secular law.

Davis was released after five days in jail and, in a compromise, has allowed licenses to be issued without her name and with her title removed. Each license includes a statement saying it is issued "pursuant to a court order."

On the flight back to Rome, Francis met for nearly an hour with reporters; without mentioning Davis by name, Terry Moran of ABC News asked him if he would support people, including government officials, "who say they cannot in good conscience, their own personal conscience, abide by some laws or discharge their duties as government officials, for example in issuing marriage licenses to same-sex couples."

Conservatives quickly pounced on the remarks as a papal endorsement of Davis' cause while others argued that it was not clear that Francis was referring to Davis or knew about her case.

(Rosie Scammell contributed to this article from the Vatican.)