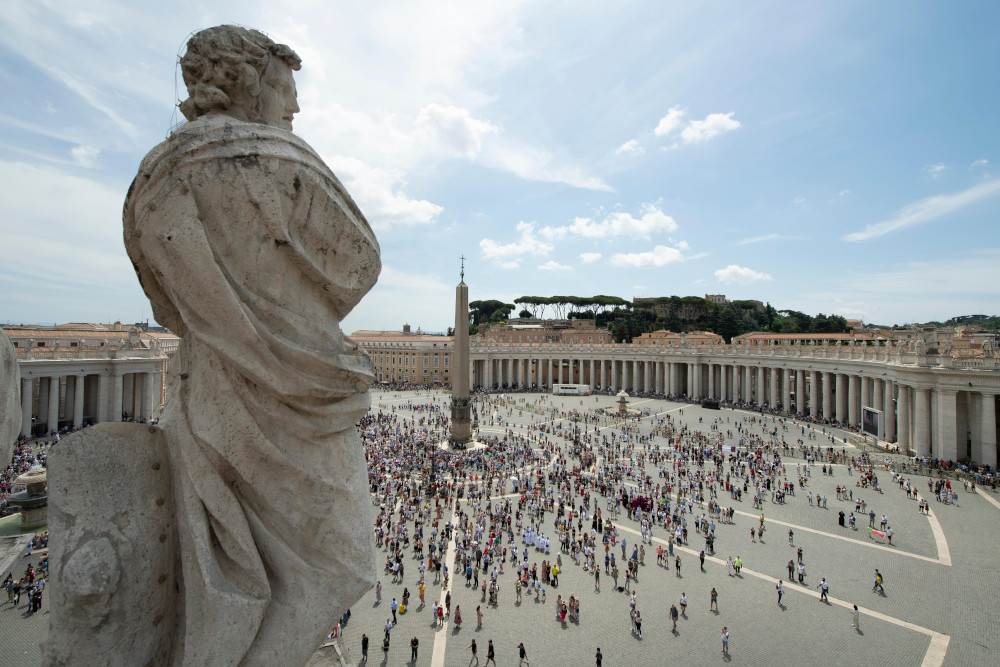 People gather in St. Peter's Square at the Vatican July 4 for the Angelus prayer with Pope Francis. (CNS/Vatican Media)

In 2001, Cardinal Jorge Bergoglio was a rapporteur for the summit of bishops at the Vatican — and he did not like what he saw.

The Catholic Church had adopted a top-to-bottom approach that stripped local churches of any decision-making power, and the synod of bishops was reduced to nothing more than a stamp of approval for prepackaged conclusions made in Rome.

When Bergoglio emerged as Pope Francis in the 2013 conclave, the synodal process was high on his list for reform.

"There was a cardinal who told us what should be discussed and what should not," Francis said about his experience at the 2001 general synod in an interview with the Argentine newspaper La Nation in 2014. "That will not happen now," he added.

On Oct. 9-10, Francis will inaugurate a three-year preparation process for the 2023 synod, which will focus on reforming the synodal process. The preparation process and the 2023 synod, with the theme "For a synodal church: Communion, participation and mission," have the potential to revolutionize the way decisions are made in the Catholic Church and promote a more decentralized structure of authority.

"If people just think about this as a meeting on meetings, they are so missing the point," said Jesuit Fr. David McCallum, executive director of the Program for Discerning Leadership of the Gregorian University in Rome and a member of the Synod Commission on Methodology, in an interview with Religion News Service.

The three-year synodal review process will take place in three phases: a local phase at the diocesan and parish level, a continental phase engaging bishops' conferences around the world and a universal phase, when bishops and lay people will convene in Rome to discuss the findings and topics developed in the first two phases. To coordinate and guide the entire process, Francis created a five-member steering committee flanked by two commissions on methodology and theology.

The hierarchical structure Francis eschewed at the Vatican in 2001 is currently reflected in Catholic dioceses around the globe. Throughout history "it became very natural that bishops, who were often the most educated and prepared leaders in the particular region where the church was, exercised their leadership as a mayor would," McCallum explained.

Speaking to La Nation, Francis said church governance "is in my hands, after I receive the necessary advice." Far from an authoritarian imposition, synod organizers say the role of the pope is that of guaranteeing unity, which helps distinguish synodality from a parliamentary debate.

The goal of the methodology commission in the first phase is to provide dioceses and parishes with guidelines that promote spaces for dialogue among all members of the community — lay, religious and the disaffiliated. Bishops will be asked to appoint a reference person whose job it is to facilitate and create opportunities for encounter. By instructing people on individual and communal discernment "the synod will have a formational quality to it before people enter it," McCallum said. 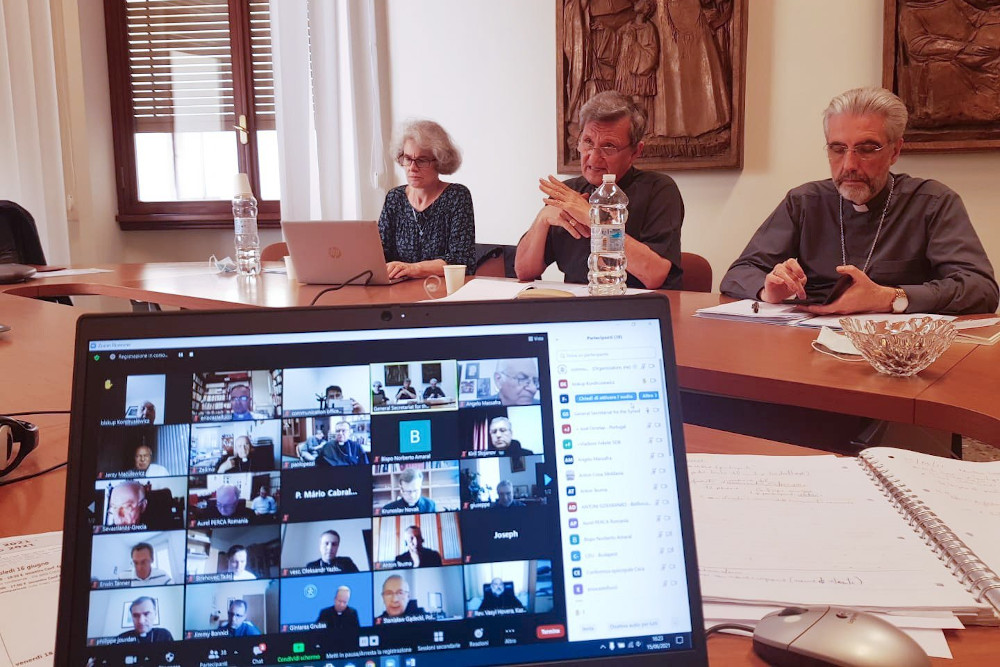 Leaders of the secretariat of the Synod of Bishops are pictured at the Vatican during an online meeting with presidents and general secretaries of national and regional bishops' conferences June 15. (CNS/Courtesy of Synod of Bishops)

In Venezuela, Rafael Luciani, full professor at the Andrés Bello Catholic University in Caracas and extraordinarius at the School of Theology and Ministry of Boston College, tackles synodality in the Latin American context.

Luciani is a lay theologian and a member of the synod's Commission for Theology. His job, ahead of the inauguration of the synodal process in Rome, is to coordinate seminars that engage the whole Latin American church. By placing a magnifying glass on local parishes, Luciani hopes to find an engaging model that can then be applied to dioceses and bishops' conferences worldwide.

Ultimately, the 2023 Synod will likely change power dynamics and relationships in the Catholic Church, but the change "has to come from local churches, not from Rome," Luciani told RNS.

Inverting the pyramidal structure of the Catholic Church may be frightening for some, proponents admit, raising concerns the Vatican will become nothing more than a bureaucratic step in the church's decision-making process or — worse still — akin to a nongovernmental organization.

Instead, the new synodal process is "a spiral," Luciani explained, where at every phase the decisions are sent from the dioceses to the episcopal conferences to Rome and then back again. "For the first time there is an interaction, it is not a linear way of proceeding," he added.

Read this next: A closer look at synodality and its promise for a more inclusive church

This "new ecclesial culture" is the real novelty of the synod, but doubts remain in the local churches, where the "biggest question is the question of authority."

Authority is closely tied to clericalism, a "perversion of the priesthood" as Francis puts it, which also induces lay people into believing those who have received the priestly ministry are above the fold, especially in the exercise of power. Financial corruption, immorality and sexual abuse by clergy are just a few examples of the consequences of an untouchable clergy. With synodality, Francis hopes to break from a tradition that has inexorably tied power in the Catholic Church to members of the clergy.

Synodality sets out to renew the power structures that have characterized the Catholic Church for centuries, but to do so it must achieve a far more ambitious goal: teaching faithful, lay and religious, to come together in dialogue at a time when entrenchment and polarization have turned Pope Francis' "culture of encounter" into a quasi-utopian and — ironically — divisive concept.

In this effort, the synod "goes beyond Pope Paul VI's vision and Pope John Paul II's and Pope Benedict XVI's different ways of proceeding and even beyond the first synods of Pope Francis," Luciani said. 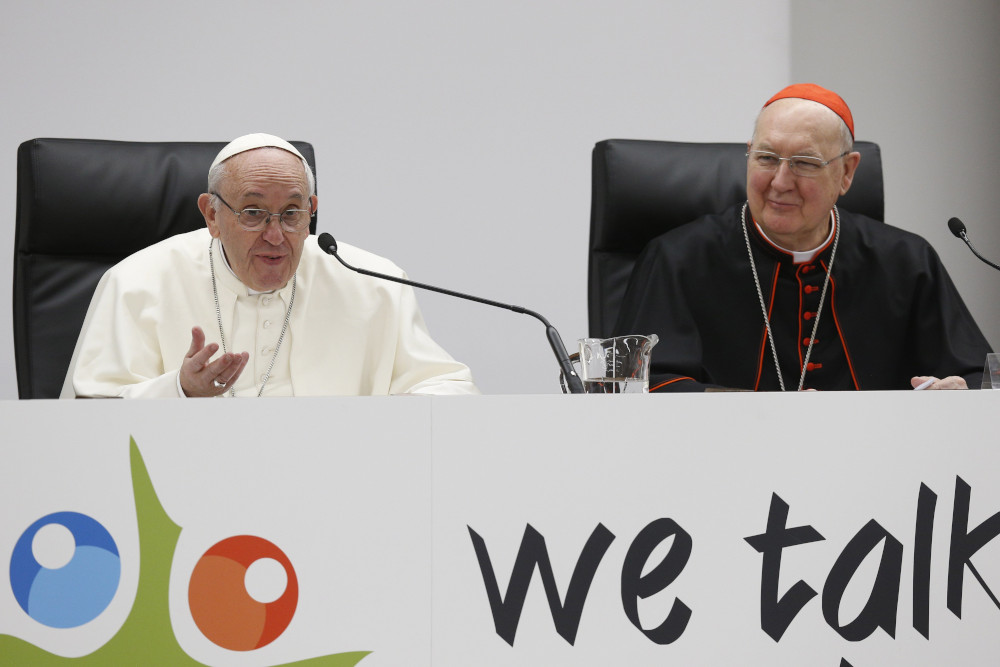 Nation-states also struggle to reconcile the differences of local realities with an increasingly centralized world. Countries such as Hungary, Poland, Brazil, Russia, the Philippines and even the United States have shifted "toward a more authoritarian way by trying to establish order as a defense against chaos and uncertainty," McCallum said.

"The church, an organization rooted in faith, needs to have a better track record than resorting to top-down authority," he added.

Members of the synod commissions are hesitant to say which structural changes will take place at the October Vatican summit. It would defeat the purpose of coming together if there wasn't a "a sense of unpredictability and also of possibility," McCallum said.

Francis understands the synod is more about "starting processes" than getting immediate results. Reforming seminaries is essential to promote the formation of clergy capable of overcoming differences and finding common ground, according to McCallum.

"We realize it's a generational process," he said.

While this conclusion may seem underwhelming, the synod is not the first step in this process. It builds on the Eastern Orthodox experience of the Synod of Jerusalem in 1672 and the transformations set in motion at the Second Vatican Council of 1962-1965, as well as the latest synods under the last three popes.

"The church, an organization rooted in faith, needs to have a better track record than resorting to top-down authority."

Synodality has already worked before. "It has been the witness of bishops already that they change," Luciani said, citing examples of prelates who were transformed in their beliefs during the synods at the Vatican on young people in 2018 and the Pan-Amazonian region in 2019.

The Latin American bishops' conference, CELAM, has a head start in its application of synodality. Since before the 2007 Aparecida meeting, where the Cardinal Bergoglio played a key role, the church in Latin America has engaged lay people and local communities in lively consultations aimed at promoting shared responsibility and dialogue. Luciani, an expert adviser to CELAM, said this synodal process offers profound insight on how to "go back to a model of the church as the church of churches."

"It's not just about who takes that decision," Luciani said, "but about how do we reach that decision together."

Francis' gamble to act as an Ignatian spiritual director to 1.2 billion Catholics in the world — if successful — could become a countercultural statement for a new way of reaching decisions that other institutions might take note of.

Synodality "needs to demonstrate to the world that we have faith that the ultimate truth and goodness that God calls us to is not going to be established by secular power, the kind of power of unilateral control," McCallum said. "It's going to be manifest when we express our love and affection for one another with authenticity, when we live with the integrity of our values and behaviors."