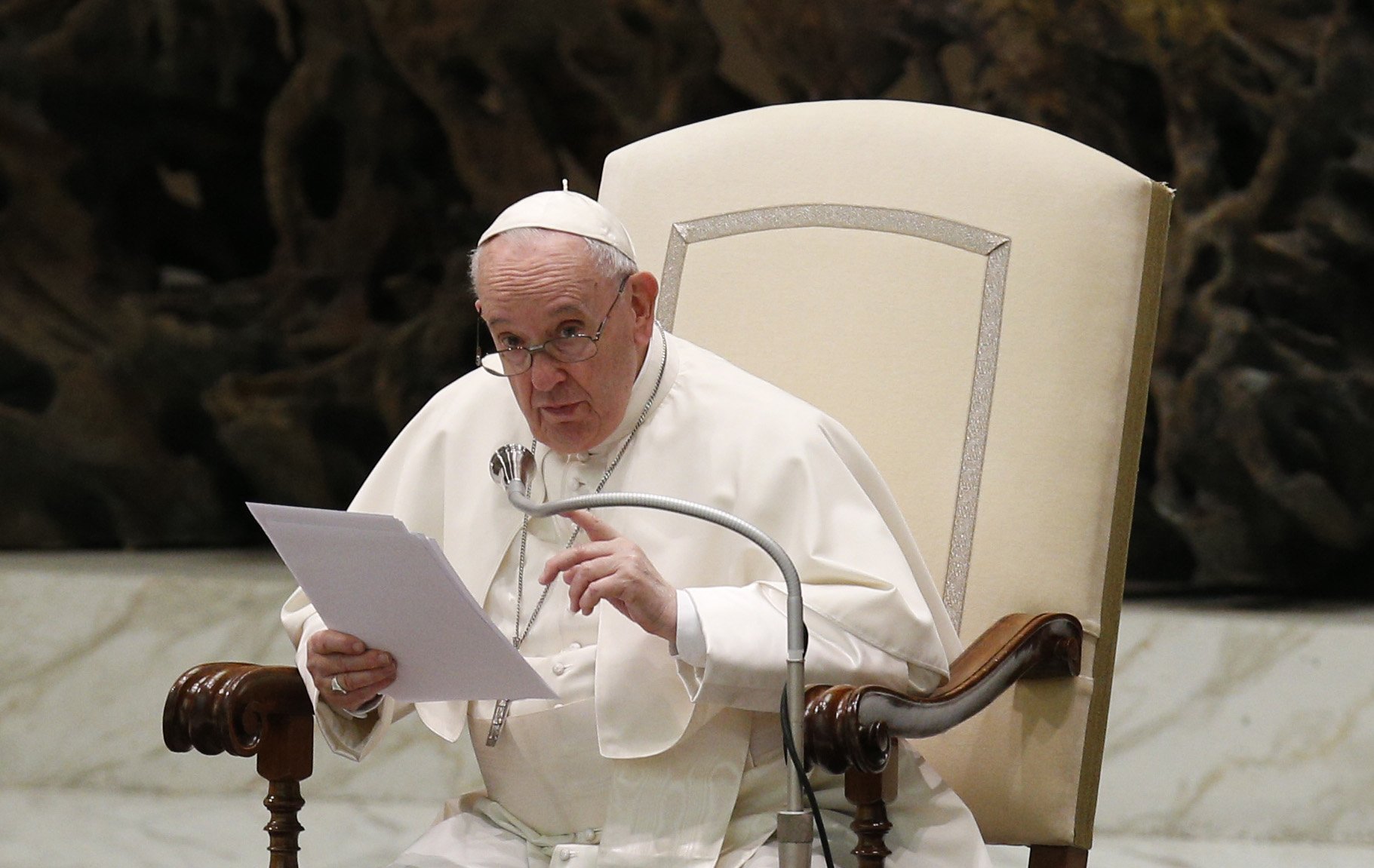 Pope Francis speaks during his general audience in the Paul VI hall at the Vatican Jan. 19, 2022. (CNS photo/Paul Haring)

ROME — Pope Francis on Jan. 26 told parents not to condemn children who have different sexual orientations.

"Never condemn your children," said Francis, who said that parents should accompany such children and "not hide behind an attitude of condemnation."

The pope's unscripted remarks came during his weekly general audience and offer yet another example of Francis' delicate tightrope walk of affirming church teaching when it comes to homosexuality and trying to extend a warmer welcome to LGBTQ persons.

At the same time, however, Francis has reiterated his support for civil union laws for same-sex couples on multiple occassions. In recent months, he has also penned a series of letters praising a nun for her LGBTQ outreach ministry, along with thanking priests and religious women who ministered to HIV and AIDS victims.

During his brief message to pilgrims gathered in the Vatican's Pope Paul VI audience hall, Francis also discussed the challenge of parents to children with disabilities and illnesses, children who struggle in school and "children who have fun with their cars and end up in accidents."

He went on to recall his personal experiences in his native Argentina of seeing mothers waiting to visit their imprisoned children.

"It made me so tender when in Buenos Aires I went by bus in front of the prison and there was a queue of people who had to enter for visits. And there were mothers there," he said. "This mother faced with the problem of a son who made a mistake, does not leave him alone."

Last November, Francis began a series of reflections on St. Joseph, the father of Jesus, whose life of faith the pope said offers a special example during a time of a global pandemic.

On Jan. 26, Francis reflected on Joseph's response to the unexpected pregnancy of Mary, the mother of Jesus.

"The Lord never allows a problem to arise without also giving us the help we need to deal with it," he said.

"May the prayers and invocations that are being raised today up to heaven touch the minds and hearts of those responsible on earth," he continued.

At the conclusion of the audience, Francis did not engage in his customary greeting to those present, saying he wanted to avoid the stairs due to an inflammation of his right knee.

"It's a passing thing," said the 85-year-old pope. "They say that this only happens to the old, I don't know why it happened to me!"

A version of this story appeared in the Feb 18-March 3, 2022 print issue under the headline: Francis: Don't condemn children with different sexual orientations.