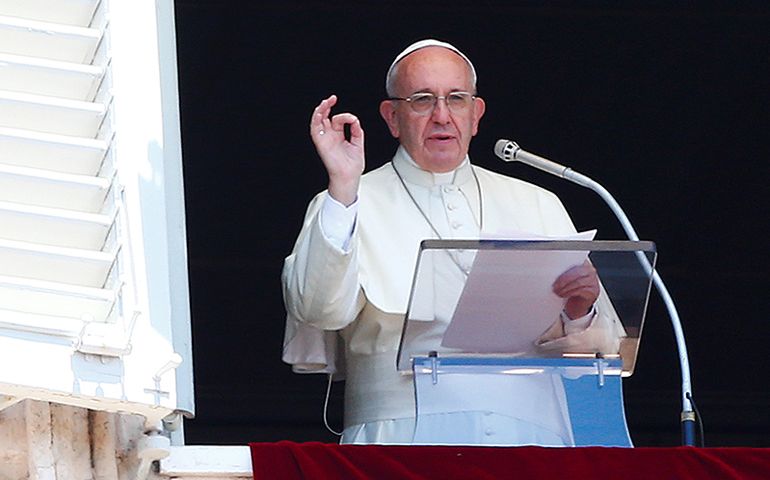 Pope Francis gestures during his Sunday Angelus prayer in Saint Peter's square at the Vatican on July 17, 2016. (Photo courtesy of Reuters/Tony Gentile)

Rome — As millions of people around the world enjoy their annual summer vacations, Pope Francis is providing a beach escape for those who cannot afford them.

In the latest sign of Francis' concern for the poor, the pope's almoner -- the Vatican official in charge of distributing alms -- is treating homeless people in Rome to a trip to the beach and to a pizza dinner on the way back home.

"We continue, with the Swiss Guards and the gendarmes (Vatican police officers), to take food to the Rome railway stations in the evening," Archbishop Konrad Krajewski told Vatican Insider, a column published by the Italian daily, La Stampa.

"But in the afternoon, using our van, I take groups of 10 homeless for a swim."

Krajewski, a Polish-born official in the Roman Curia who looks after the pontiff's charity funds, said he has been driving the homeless to a beach at Passoscuro, about 25 miles from the Italian capital, and stopping at a local pizzeria on the way back.

The guests, who mainly live around the Vatican, are also given swimsuits and towels for their trip and their pizza. All expenses are paid with funds that the pope can distribute for charitable services.

"We are certainly not saving the world with these initiatives, we are not solving the problems of the homeless in Rome, but at least we are giving them back a little dignity," Krajewski said.

Francis has demonstrated his commitment to help the homeless throughout his pontificate. In a controversial move, he installed showers for the homeless beside the colonnade in St. Peter's Square, as well as a barber service and medical service.

Last year the pope opened a dormitory for destitute men near the Vatican and in 2014 he handed out 400 sleeping bags to the homeless in Rome.

Also, on consecutive days last week, Francis sent a message to those in the West who oppose offering sanctuary to many refugees by inviting 21 Syrian exiles to lunch in the Vatican, and he followed that by making a surprise visit to 20 women rescued from sexual slavery.

On Monday, he used the feast of the Assumption of the Virgin Mary to reinforce his message on protecting women.

Mary's example, Francis told pilgrims gathered in St. Peter's Square, "leads us to think about many current sad situations, in particular those women overwhelmed by the weight of life and the drama of violence; of women who are slaves to the arrogance of the powerful; the girls forced into inhumane work; the women forced to surrender in both body and spirit to the avarice of men."

Francis seems intent on making sure that such initiatives are not one-time acts of generosity but are the defining witness of the Catholic church.

In a noontime address on Sunday, the pope warned that the church was in danger of becoming "an administrative or bureaucratic" institution and called for more impassioned missionaries with "fire" in their hearts.

"The church doesn't need bureaucrats and diligent office workers but impassioned missionaries consumed by the ardor of bringing to all people the consoling words of Christ," he said during his weekly Angelus address in St. Peter's Square.

The church, he said, "needs the help of the Holy Spirit to not be held back through fear and calculation, to not get used to walking within safe boundaries."

Without the "fire" of the Holy Spirit, he said, the church "becomes a cold or merely lukewarm church, incapable of giving life, because it is made up of cold and lukewarm Christians."

So far around 100 homeless from countries including Afghanistan, Albania, Ukraine and Italy have taken part in Krajewski's beach tours.

"For our brothers in need who are used to living in insecurity, these are occasions that remain in their memory, they have the chance to feel like everyone else," said Krajewski.

"Already more than one, upon seeing me again, has asked: 'Father, when will you take us back to the sea?'"

Pope to celebrate Mass, welcome homeless on pilgrimage to Rome

Vatican to care for homeless woman who gave birth outside of St. Peter's