by Christopher White
Vatican
This article appears in the Francis in Cyprus and Greece feature series. View the full series. 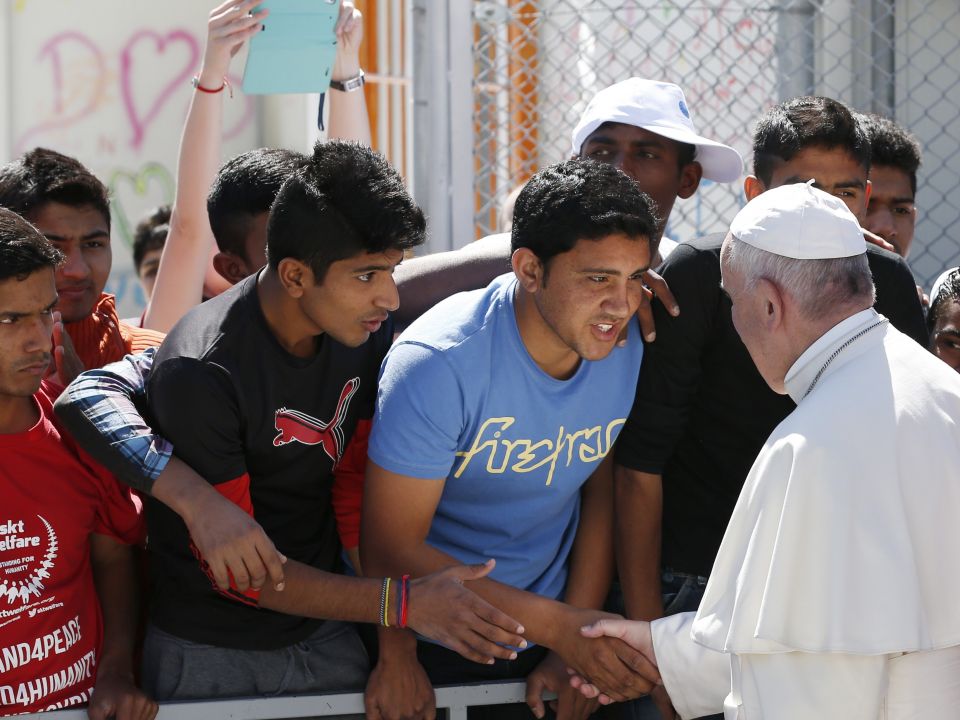 Pope Francis meets refugees at the Moria refugee camp on the island of Lesbos, Greece, in this April 16, 2016, file photo. (CNS photo/Paul Haring)

ROME — Pope Francis will visit Cyprus and Greece next month, the Vatican confirmed on Nov. 5.

The Dec. 2-6 trip to the two Mediterranean nations has long been rumored and will mark Francis' third international journey since the start of the COVID-19 pandemic. A Vatican statement noted that Francis would spend two nights in each country and said a full schedule would be provided in "due course."

During the visit to the Republic of Cyprus, a nation divided between its Greek and Turkish communities, Francis is expected to push for an end to the often violent ethnic conflict on the island.

In 2010, Pope Benedict became the first pontiff to visit the island nation. There, he pleaded for peace and emphasized the importance of interreligious dialogue between the country's majority Greek Orthodox inhabitants and its minority Turkish Muslim neighbors. The country's estimated 10,000 Catholics make up about 1% of the island's population.

St. Paul the Apostle made Cyprus the first stop of his journeys during the 1st century and converted the island's governor to the Christian faith. Francis had previously pledged to visit in 2020 to mark the 60th anniversary of Cyprus' independence from British colonial rule, though the trip was later postponed due to the global pandemic.

In Greece, Francis will make a return visit to the tiny Island of Lesbos, which is actually closer to the Turkish mainland than it is to Greece.

Over the last five years, Lesbos has become a popular waypoint for refugees and asylum seekers fleeing the Middle East. During his visit there in 2016, Francis memorably brought back 12 Muslim refugees with him on the papal plane to live in Italy.

In 2017, the island suffered an earthquake and, more recently, in 2020, arsonists set fire to the Moria refugee camp that Francis had visited four years earlier, leaving some 12,000 individuals homeless. At the time, it was the largest refugee camp in Europe.

Before returning to Rome, Francis will also visit the Greek capital of Athens. Francis' travels in Cyprus and Greece will mark the 35th international trip of his papacy.

At the border, communities vent anger toward Washington