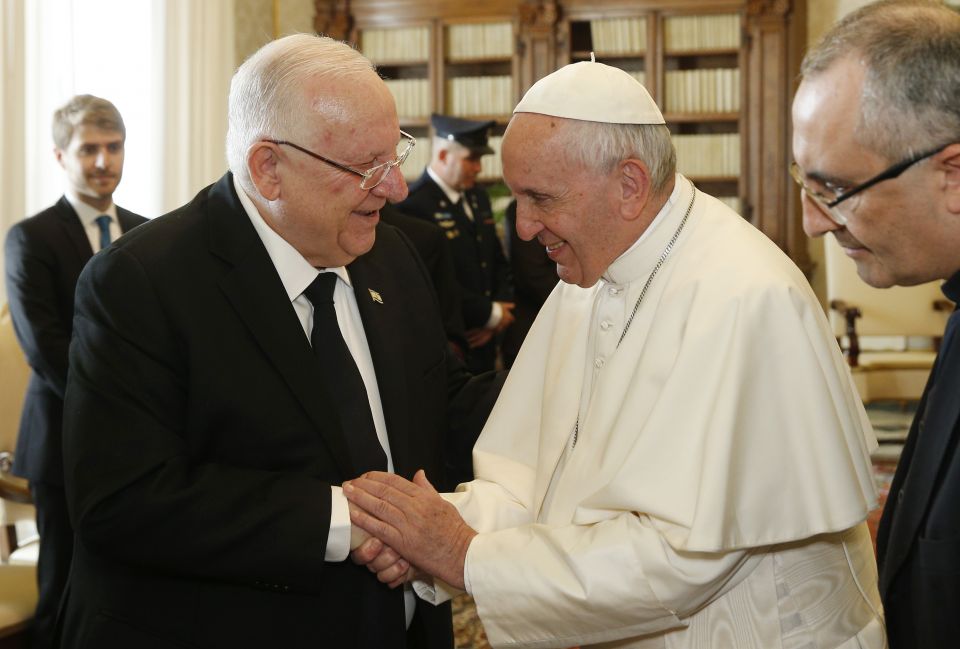 Vatican City — Pope Francis welcomed Israeli President Reuven Rivlin to the Vatican Nov. 15 for a private discussion that included the importance of building greater trust between Israelis and Palestinians.

During their 35-minute meeting, they spoke about the importance of mutual trust in negotiations "so as to reach an accord respecting the legitimate aspirations of both peoples," the Vatican said in a statement.

"The hope was expressed that suitable agreements may be reached" also between Israeli authorities and local Catholic communities "in relation to some issues of common interest," it said, adding that the Holy See and the State of Israel would soon celebrate the 25th anniversary of establishing diplomatic relations.

Aided by interpreters, the pope and president spoke about "the political and social situation in the region, marked by different conflicts and the consequent humanitarian crises. In this context, the parties highlighted the importance of dialogue between the various religious communities in order to guarantee peaceful coexistence and stability," the statement said.

"Mention was made of the importance of building greater mutual trust in view of the resumption of negotiations between Israelis and Palestinians so as to reach an accord respecting the legitimate aspirations of both peoples, and of the Jerusalem question, in its religious and human dimension for Jews, Christians and Muslims, as well as the importance of safeguarding its identity and vocation as City of Peace."

According to pool reporters, the president told the pope that the image showed how one could divide the various parts of the city, but also unite it in new ways. The walled Old City is divided into the Jewish quarter, the Armenian quarter, the Christian quarter and the Muslim quarter.

"Jerusalem has been a holy city for the three monotheistic religions for centuries. For the Jewish people, #Jerusalem has been the spiritual center since the days of the First Temple over 3,000 years ago, but it is also a microcosm of our ability to live together," the president tweeted later, adding a photo of the two of them speaking during the gift exchange.

The Vatican consistently has called for a special status for Jerusalem, particularly its Old City, in order to protect and guarantee access to the holy sites of Judaism, Christianity and Islam.

During the meeting, Francis gave Rivlin a large medallion, which the pope described as representing wheat being able to grow in the desert. Pool reporters said the pope told the president he hoped this desert would be transformed from a desert of animosity into a land of friendship.

The Jerusalem Post reported that Rivlin thanked the pope for supporting the fight against anti-Semitism.

"Your absolute condemnation of acts of anti-Semitism and your definition of such acts as anti-Christian are a significant step in the ongoing fight to stamp it out," Rivlin said.

Members of Rivlin's entourage said they also talked about the controversy between Jerusalem's city government and the Catholic Church concerning city property taxes.

In early February, the Jerusalem Municipality announced it would begin collecting $186.4 million in property taxes from some 887 church-owned properties that were not houses of prayer. Since then, the Israeli government set up a negotiating team to resolve the dispute.