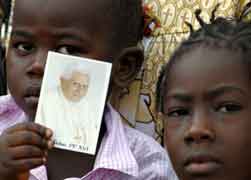 Yaoundè, Cameroon
For a sound-bite sense of the point Pope Benedict XVI wanted to make in his meeting with 22 African Muslims, think of it this way: A shorter version of Regensburg, without the poke in the eye.

Regensburg, of course, refers to the pope’s famous 2006 address at the University of Regensburg in Bavaria, in which he took up the relationship between reason and faith. Reason shorn of faith, he suggested, becomes skepticism and nihilism, which is the typical pathology of the West; faith divorced from reason, meanwhile, becomes fundamentalism and intolerance, which one sees in some currents in the Islamic world.

That carefully reasoned argument, however, was overshadowed by how the pope began. He opened the Regensburg address with a citation from a 14th century Byzantine emperor, to the effect that Muhammad, the founder of Islam, “brought things only evil and inhuman, such as his command to spread by the sword the faith he preached.” That line triggered a firestorm of protest in the Islamic world, and in some ways the Vatican has been in damage-control mode ever since.

Today saw a pope who has carefully honed his message to Muslims, distilling the essence of the 5,000-word Regensburg address into a few phrases – the heart of which was a paean to the “vast potential of human reason.”

“Genuine religion widens the horizon of human understanding and stands at the base of any authentically human culture,” the pope said. “It rejects all forms of violence and totalitarianism: not only on principles of faith, but also of right reason.”

“Indeed, religion and reason mutually reinforce one another, since religion is purified and structured by reason, and reason’s full potential is unleashed by revelation and faith,” the pontiff.

This was the essence of Regensburg: Benedict’s suggestion that Christians and Muslims have something to offer one another. Christians can contribute centuries of experience of reflecting on faith in the light of reason, leading to a spirit of tolerance; Muslims can share vibrant religiosity and insistence that empirical logic alone is not enough, thus rejuvenating a sometimes spiritually enervated West.

In other words, the point of Regensburg was to suggest that on the contemporary cultural scene, Christians and Muslims ought to be natural allies – a point that was all but lost in the polemics that followed, but which seemed much clearer this morning after the pope’s session with local Muslims as the residence of the papal ambassador in Yaoundè.

Also clear was Benedict’s preference for Christian-Muslim cooperation at the political and social level, in defense of shared values, rather than strictly theological exchange.

The pope suggested that dialogue between Christians and Muslims should “enhance mutual understanding and assist in the building up of a stable and just political order.”

In a recent preface to a book by Italian philosopher and politician Marcello Pera, the pope asserted that inter-religious dialogue, “strictly speaking, is impossible,” because it means setting aside one’s own religious identity. “Inter-cultural dialogue,” on the other hand, is “urgent and necessary,” Benedict said – by which he meant, in part, a search for common ground on how religious values can shape political and social life.

Among other things, the pope doubtless has in mind the defense of human life and the family, including opposition to abortion and homosexuality – values he shares with Muslim leaders.

During his open-air Mass in a downtown sports stadium this morning, Benedict XVI delivered a strong pro-life message.

“Every human being, every tiny human person, however weak, is created ‘in the image and likeness of God,’” the pope said. “Every person must live! Death must not prevail over life! Death will never have the last word!”

A Vatican spokesperson afterwards described the session with Muslims as “cordial and friendly,” and said the pope was grateful for the welcome from local Muslims. Cameroon, with a population of 19 million, is roughly 20 percent Muslim, 30 percent Christian, and the rest are followers of traditional African religions.

Jesuit Fr. Federico Lombardi also said that when the pope and Muslims were exchanging handshakes, several Muslims told the pontiff, “You are not alone.” (Though Lombardi said they meant it as an expression of desire for good relations, Vatican-watchers could not help but connect the remark to recent speculation in the Italian press that Benedict XVI has been isolated, even within the Vatican, by the recent controversy over a Holocaust-denying bishop. The pope’s number two official, Cardinal Tarcisio Bertone, recently took the unusual step of assuring reporters that “the pope is not alone.”)

In part, the warm atmospherics of today’s encounter can be explained by the strong tradition of Muslim-Christian harmony in Cameroon, which stands in contrast to the experience of some of its neighbors. In Nigeria, for example, violent Muslim/Christian clashes in recent years following attempts to impose shariah, meaning Islamic law,in some majority Muslim states have left hundreds dead. In Cameroon, by way of contrast, observers say the two communities live in peace. Even in the north, where Muslims often form a majority, there has been no attempt to impose shariah.

In many parts of Cameroon, Christians, Muslims and followers of traditional religions live in mixed communities, working together and often belonging to the same local tribes. The pope paid tribute to that tradition this morning.

“Cameroon is home to thousands of Christians and Muslims, who often live, work and worship in the same neighborhood,” he said, saying that such solidarity “advances the common good.”

Vatican sources said that in part, the pope hopes examples of Christian-Muslim harmony such as Cameroon will provide an alternative narrative to the “clash of civilizations,” referring to the hypothesis of an inevitable rivalry between the two monotheistic faiths and the cultures they have shaped.

Vatican monsignor's money-laundering charge a step in the right direction

Vatican norms insist on 'generous' approval for use of Tridentine rite