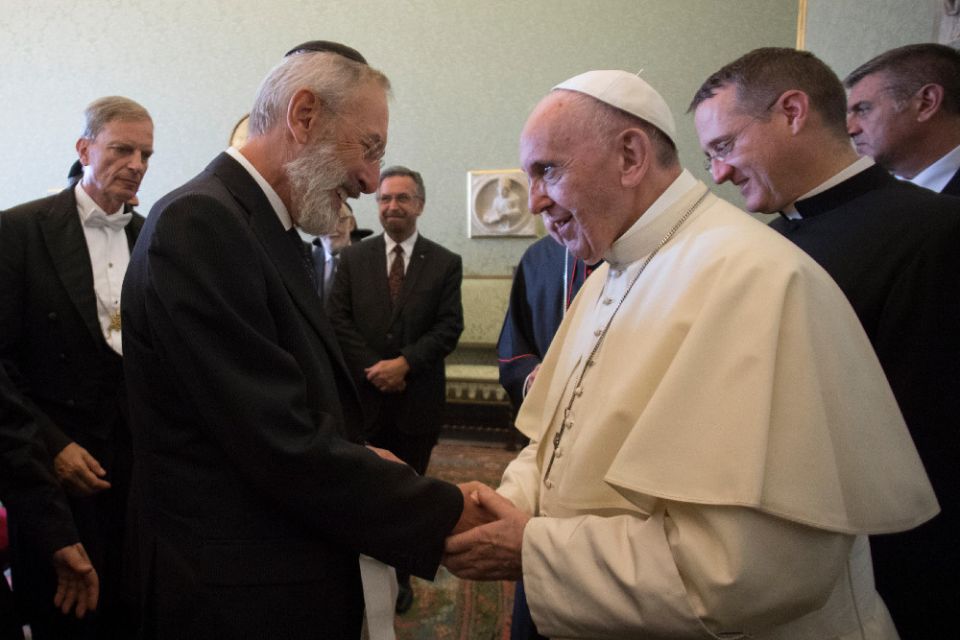 Pope Francis greets Rabbi Riccardo Di Segni, chief rabbi of Rome, during a meeting with representatives of the Conference of European Rabbis, the Rabbinical Council of America and the Commission of the Chief Rabbinate of Israel at the Vatican Aug. 31. (CNS/L'Osservatore Romano)

"In recent decades, we have been able to draw closer to one another and to engage in an effective and fruitful dialogue. We have grown in mutual understanding and deepened our bonds of friendship," he told a delegation of rabbis, led by Rabbi Pinchas Goldschmidt, chief rabbi of Moscow.

The pope met Aug. 31 with representatives of the Conference of European Rabbis, the Rabbinical Council of America and the Commission of the Chief Rabbinate of Israel; the groups are engaged in dialogue with the Holy See's Commission for Religious Relations with the Jews.

The rabbis presented the pope with their written declaration, "Between Jerusalem and Rome," which, according to the declaration, offers "an important contemporary Jewish Orthodox reflection on the relationship between Judaism and Christianity."

In the declaration, published online in early 2017, the rabbinical leaders urged the Catholic Church to partner with them "in deepening our combat against our generation's new barbarism, namely the radical offshoots of Islam, which endangers our global society and does not spare moderate Muslims."

"As a people who suffered from persecution and genocide throughout our history, we are all too aware of the very real danger facing many Christians in the Middle East, and elsewhere they are persecuted and menaced by violence and death at the hands of those who invoke God's name in vain through violence and terror," the document said.

This radical extremism "threatens world peace in general and the Christian and Jewish communities in particular. We call on all people of good will to join forces to fight this evil," it said.

As the Western world becomes more secular and abandons its Judeo-Christian values, the more religious freedom will be "increasingly threatened by the forces of both secularism and religious extremism," it said.

For that reason, the leaders wrote they seek to partner with "the Catholic community in particular, and other faith communities in general, to assure the future of religious freedom, to foster the moral principles of our faiths, particularly the sanctity of life and the significance of the traditional family, and to cultivate the moral and religious conscience of society."

In his remarks to the groups, Pope Francis told them, "We are presently experiencing a fruitful moment of dialogue." And he echoed the declaration's statement that, "given the great spiritual heritage we hold in common, every effort must be made to foster reciprocal knowledge and respect, above all through biblical studies and fraternal discussions."

While recognizing deep theological differences exist between the two faith traditions, the pope underlined the importance of the document affirming that "religions must use moral behavior and religious education — not war, coercion or social pressure — to influence and inspire."

After expressing his hopes that "the Eternal One bless and enlighten our cooperation, so that together we can accept and carry out ever better his plans," the pope told the delegation, "Shanah tovah," conveying his best wishes for the Jewish New Year, which begins Sept. 20.

He asked the delegates to remember him in their prayers and he prayed that "the Almighty bestow his peace upon us and upon the entire world."

Pope appeals for end to inhumane fighting, evil of war in Syria