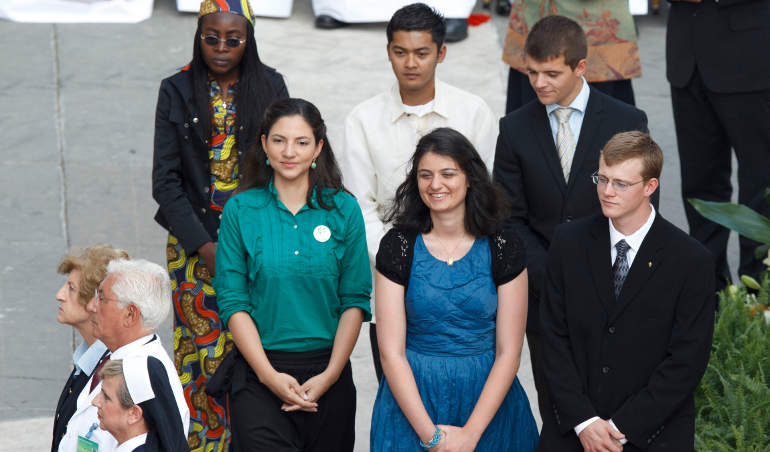 Laypeople and religious from various countries and walks of life come forward to receive a message from Pope Benedict XVI during a Mass in St. Peter's Square at the Vatican Oct. 11. The Mass marked the 50th anniversary of the opening of the Second Vatica n Council, and the pope presented copies of the council's messages that Pope Paul VI wrote in 1965. The Mass also opened the Year of Faith. (CNS/Paul Haring)

In a gesture recalling how the Second Vatican Council sought to enhance the connection between the church and the world, Pope Benedict XVI handed out copies of the council's messages for laypeople in various walks of life.

At the end of the Mass in St. Peter's Square marking the 50th anniversary of the opening of Vatican II and the start of the Year of Faith, the pope gave out texts of the special messages that Pope Paul VI had composed for seven categories of the faithful; Pope Benedict chose contemporary representatives of those groups to receive the messages Oct. 11.

The symbolic gesture was meant not just to recall and commemorate an event from the past, but to "enter more deeply into the spiritual movement, which characterized Vatican II, to make it ours and to develop it according to its true meaning," the pope said in his homily.

The seven messages, initially presented by Pope Paul on Dec. 8, 1965, address the concerns and responsibilities of: political leaders; scientists and cultural figures; artists; women; workers; the poor, sick and suffering; and young people.

Pope Benedict gave the "Message to Politicians" to some members of the diplomatic corps accredited to the Holy See, including ambassadors to the Vatican from each continent.

The message said that the only thing the church asks of politicians is freedom -- "the liberty to believe and to preach her faith, the freedom to love her God and serve him, the freedom to live and to bring to men her message of life. Do not fear her."

It added: "Allow Christ to exercise his purifying action on society. Do not crucify him anew."

Pope Benedict, who was standing and shook each person's hand, gave an Italian physicist, a German philosopher and a German Biblicist copies of the "Message to the World of Culture and Science."

The message speaks of the clear possibility for "a deep understanding between real science and real faith, mutual servants of one another in the one truth. Do not stand in the way of this important meeting. Have confidence in faith, this great friend of intelligence."

The message said the world "needs beauty in order not to sink into despair." Artists are "the guardians of beauty" and should be free from fads and "strange or unbecoming expressions."

Kathryn Lopez, a U.S. journalist and editor-at-large of the National Review Online; Annalisa Minetti, an Italian 2012 Paralympic medalist in track; a Chinese nun who teaches theology; and others received the "Message to Women."

It said the current age is when "the vocation of woman is being achieved in its fullness, the hour in which woman acquires in the world an influence, an effect and a power never hitherto achieved."

"Our technology runs the risk of becoming inhuman. Reconcile men with life and above all, we beseech you, watch carefully over the future of our race. Hold back the hand of man who, in a moment of folly, might attempt to destroy human civilization," it says.

Those receiving the "Message to Workers" included Luis Urzua Iribarren, one of the 33 Chilean miners trapped underground for two months in 2010. The church appreciates workers' service and virtues such as "courage, dedication, professional conscience, love of justice," the message says.

A doctor, nurse, and woman who lost her daughter to a car accident received the "Message to all the Poor, Sick and Suffering." The pope descended the sacristy's stairs to greet and deliver the message to a woman seated in a wheelchair.

The message says Christ "took suffering upon himself and this is enough to make you understand all its value."

"Know that you are not alone, separated, abandoned or useless. You have been called by Christ and are his living and transparent image," the message says.

Pope Paul's "Message to Young People" was received by young Catholics from Brazil, Congo, the Philippines, France and by Anna Fsadni from Sydney and Robert Prybyla from Round Rock, Texas.

The message called on young people to dedicate their energy to those in need. "Fight against all egoism. Refuse to give free course to the instincts of violence and hatred which beget wars and all their train of miseries. Be generous, pure, respectful and sincere, and build in enthusiasm a better world than your elders had."

Caroline Farey of the Maryvale Institute in Birmingham, England, who was attending the Synod of Bishops on the new evangelization, was one of two catechists who received from Pope Benedict a special Year of Faith edition of the Catechism of the Catholic Church.

Archbishop Rino Fisichella, president of the Pontifical Council for Promoting New Evangelization, told journalists Oct. 9 that men and women, some well-known and some not, were chosen from all over the world because "this is the church we are addressing, like at the time of the council."