Pope says Christians should have restless hearts like St. Augustine's 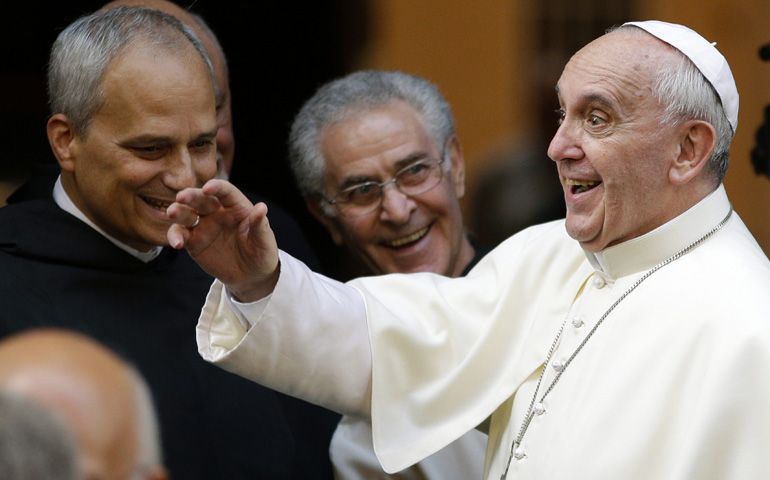 Pope Francis waves to well-wishers as he arrives to celebrate Mass at the Basilica of St. Augustine in Rome on the saint's feast day Wednesday. (CNS/Reuters/Max Rossi)

St. Augustine famously said people's hearts are restless until they rest in God, but too many people, Pope Francis said, have allowed their hearts to be "anesthetized" and no longer search for God and for love.

Celebrating the saint's feast day Wednesday with members of the Order of St. Augustine, Pope Francis prayed they would always be restless in their search for God, their desire to share the Gospel and their drive to demonstrate their love for everyone they meet.

Although the Vatican described the liturgy as a "private" Mass with members of the Augustinian fathers' general chapter, hundreds of people gathered outside Rome's Basilica of St. Augustine to get a glimpse of the pope and shake his hand. The pope obliged before entering the church.

Ninety members of the order, founded in 1244, were gathered in the basilica to open their order's general chapter and elect a successor to U.S. Fr. Robert Prevost, who has completed two six-year terms and is ineligible to serve again.

In his homily, Pope Francis said St. Augustine's use of the term "restlessness" was striking and led him to think about three basic areas in which every Christian should be restless: in the spiritual life, in the search for God and in love for others.

Augustine lived a life like that of many young people today, the pope said.

"He was educated by his mother Monica in the Christian faith, although he was not baptized, but as he grew he moved away from it. He didn't find in it the answer to his questions, to the desires of his heart and he became attracted to other things."

He studied, he had fun, "he knew intense love" and began a brilliant career as a teacher of rhetoric, the pope said. "He had arrived in every way."

"But in his heart, there remained the restlessness of the search for the profound meaning of life," Pope Francis said. "His heart was not asleep, it was not anesthetized by success, by things, by power."

Augustine continued to seek God, the pope said, and "he discovered that God was waiting for him and, in fact, never stopped looking for him first."

Pope Francis said Christians must "look into your hearts and ask yourself if you have a heart that wants great things or a heart that is asleep. Has your heart maintained that restlessness or has it been suffocated by things?"

Every Christian, he said, must "let yourself be restless for God" and, like St. Augustine, never tire of sharing the good news of God's love and promise of salvation with others who are as lost as he was.

The pope, who as a cardinal would visit the basilica during trips to Rome to pray at the tomb of St. Monica, mother of St. Augustine, said St. Augustine must have learned to love God and others from his mother.

"How many tears that holy woman shed for the conversion of her son. And how many mothers today shed tears that their children would return to Christ," Pope Francis said. "Don't lose hope in the grace of God."

Like St. Monica, he said, Christians are called to love others to the point of shedding tears for their well-being and salvation.

"The restlessness of love always pushes you forward to go out and encounter the other without waiting for the other to tell us what he needs," the pope said.

Prevost, superior of the order that has about 2,800 members, told the Vatican newspaper that the pope's offer to preside at the opening Mass was a "great and generous gesture."

"We were amazed after we requested an audience with the Holy Father for the chapter and found out that he decided to celebrate Mass with us," Prevost told L'Osservatore Romano.

The Basilica of St. Augustine is around the corner from the Paul VI Residence where the former Cardinal Jorge Bergoglio stayed before the conclave that elected him pope in March and where he returned after his election to personally pay his bill.

Is the Francis pontificate in crisis? A response to Faggioli

God's glory is shown on the cross, pope says at audience