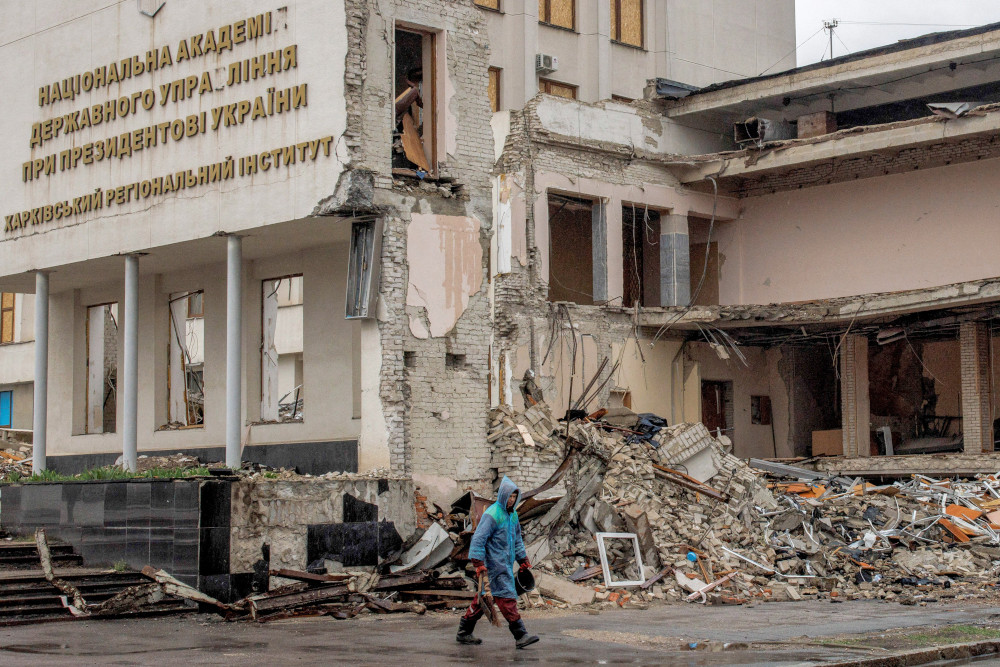 A man walks past the Kharkiv Regional Institute of the National Academy of Public Administration building in Ukraine April 12, 2022. (CNS photo/Alkis Konstantinidis, Reuters)

In Russia's war on Ukraine, "the forces of evil" are clearly at work, leading to "abominable" attacks on innocent people and widescale destruction of their homes, Pope Francis said.

As a varied group of religious leaders visited displaced people in Chernivtsi, Ukraine, listening to their stories and offering words of encouragement April 12, Francis sent a written message hailing the initiative of "my brothers and sisters who have been brought together by trust and hope in the Most High, the giver and guardian of life."

After visiting the displaced people, the group went to the Chernivtsi theater and hosted "Faith in Ukraine," a series of talks and reflections, music, poetry and meditations.

In his message, read in Ukrainian by a Franciscan friar, Francis said the war in Ukraine is so troubling "because it is marked by the forces of evil."

"The suffering inflicted on so many frail and defenseless persons, the many civilians massacred and the innocent victims among the young, the desperate plight of women and children -- all this troubles our consciences and obliges us not to keep silent, not to remain indifferent," Francis wrote.

People of goodwill, he said, must "speak out forcefully in order to demand, in the name of God, the end of these abominable actions."

What is happening in Ukraine, he said, is confirmation that "war is a failure of politics and of humanity, a shameful capitulation, a stinging defeat before the forces of evil."

Francis thanked the religious leaders for offering their prayers and demonstrating kinship among followers of different religious, "which contributes to strengthening the sense of responsibility of believers before a war that contradicts all those efforts made in past decades to build a world with fewer weapons and greater peace."

"May government leaders, especially those who appeal to the sacred principles of religion, hear the word of God that says: 'I have plans for peace and not for evil,'" he said, quoting from the Book of Jeremiah.

Francis prayed that "the dignity of the human person and the sacredness of life always be the firm principles that guide and direct our commitment to fraternity."