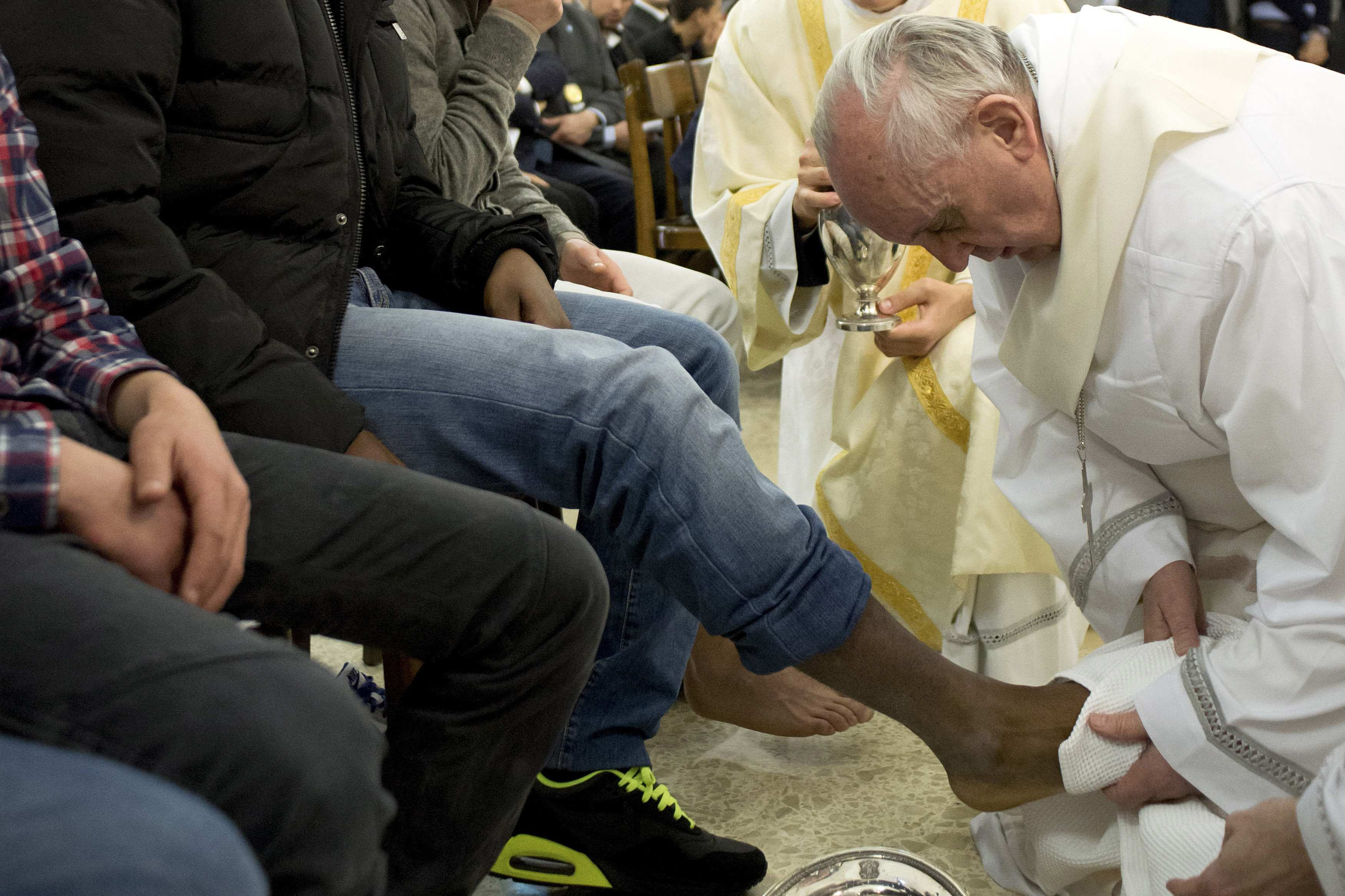 Pope Francis washes the foot of a prison inmate during the Holy Thursday Mass of the Lord's Supper at Rome's Casal del Marmo prison for minors March 28. Francis washed the feet of 12 young people of different nationalities and faiths, including at least two Muslims and two women, who are housed at the juvenile detention facility. (CNS photo/L'Osservatore Romano via Reuters)

VATICAN CITY — Pope Francis told young inmates that, just as Jesus came to help and serve others, he, too, was at their service as a priest and bishop.

During the evening Mass at Rome's Casal del Marmo prison for minors, Francis washed the feet of 12 young people of different nationalities and faiths, including at least two Muslims and two women, who are housed at the juvenile detention facility.

The ceremony of washing another's feet "is important," the pope said, because it shows that "the person who is most high among us must be at the service of the others."

It also means that "we have to help one another, each one," he said during the Holy Thursday Mass of the Lord's Supper March 28.

The pope broke with a papal Holy Week tradition of celebrating the evening Mass at a Rome basilica.

While the prison Mass marked a first for the modern papacy, the practice was nothing new to Francis who, as archbishop of Buenos Aires, used to celebrate the Mass of the Lord's Supper — which reflects on the call to imitate Christ by serving one another and commemorates Jesus' institution of the Eucharist — in prisons, hospitals or shelters for the poor and marginalized.

Held in the prison's small chapel, the Mass was the second of two Holy Thursday liturgies over which the pope presided. The first was a morning chrism Mass in St. Peter's Basilica.

The nearly 50 detainees, including about a dozen women, attended the Mass. Detainees did the readings and led the prayers of the faithful.

A group of young people who volunteer at the prison as well as a local charismatic group provided the music, playing acoustic guitar and leading the singing.

In his brief homily, which he delivered off-the-cuff, Pope Francis explained what the ritual he was about to perform meant and what Jesus was teaching his disciples when he washed their feet at the Last Supper.

"To wash your feet, this is a symbol, a sign that I am at your service," the pope said. "But it also means that we have to help each other."

He told the young detainees that it was normal to get mad at others, "but let it be, let it be." If that person "asks you a favor, do it. Let's help each other," he told them.

He added that he would wash their feet with love.

"I do it with my heart because it is my duty as priest and as bishop; I have to be at your service," he said.

"It's a duty that comes from my heart because I love doing this, because this is what the Lord taught me," he added.

"This sign is a caress from Jesus," he said, "because Jesus came exactly for this, to serve and to help us."

He said that, while he was washing the feet of the 12 young men and women, all at the Mass should ask themselves, "Am I really willing to help others?"

He urged all the detainees to follow the Lord's example and help others because that way "we will also do good" in the world.

Vatican Radio reported that the pope knelt on both knees before the youths, washed, dried and then kissed their feet.

The pope later exchanged the sign of peace — a hug and kiss — with the young people whose feet he washed. He also distributed Communion, which he had not been doing at more public Masses.

While media outlets were not allowed inside the facility, Vatican Radio offered a live audio feed and the Vatican spokesman, Jesuit Fr. Federico Lombardi, briefed reporters afterward. He said the ritual was "extremely moving" because kneeling on both knees was very demanding for a 76-year-old pope.

At the end of the Mass, Francis greeted the residents and 150 members of the prison staff and other guests in the gym.

The pope thanked everyone for their warm welcome and said he was happy to be with them.

In strong words of encouragement, he told the young people "Press on! Don't let yourselves be robbed of hope. Understood?"

The pope greeted the residents with hugs and gave each of the young detainees a large chocolate egg and a traditional Italian Easter cake shaped like a dove.

The detainees, who range in age from 14 to 21, then gave the pope a wooden crucifix and kneeler they made in the detention center's woodshop.

Among those concelebrating with the pope were Cardinal Agostino Vallini, papal vicar for Rome; Archbishop Giovanni Becciu, the No. 3 official at the Vatican Secretariat of State; Capuchin Fr. Gaetano Greco, prison chaplain; two deacons and two seminarians.

Only eight of the detainees are Italian, the rest are immigrants, many of whom are Muslim while some others are non-believers, Greco said. Many come from North Africa or Slavic nations.

Explaining to them who the pope was and why his visit was important "wasn't easy," Greco told the Vatican newspaper Wednesday.

"I felt dejected for a bit when I saw faces lacking emotion or others curious as to why I was so enthusiastic," he said.

But the silence was soon broken, the priest said, when a boy from Naples clutched his own head and shouted, "Oh, Mother of God, the pope here!?"

Once the others saw the boy's astonishment and happiness, they started to understand "that this was something truly out of the ordinary, and they began to ask questions. Little by little I saw them getting more enthused, and from that moment on it hasn't died down," Greco said.

The priest, who has been chaplain at the facility for more than 30 years, said he was sure the pope's visit would make a positive impact on the detainees, as did the visits from Blessed John Paul II in 1980 and Pope Benedict XVI in 2007.