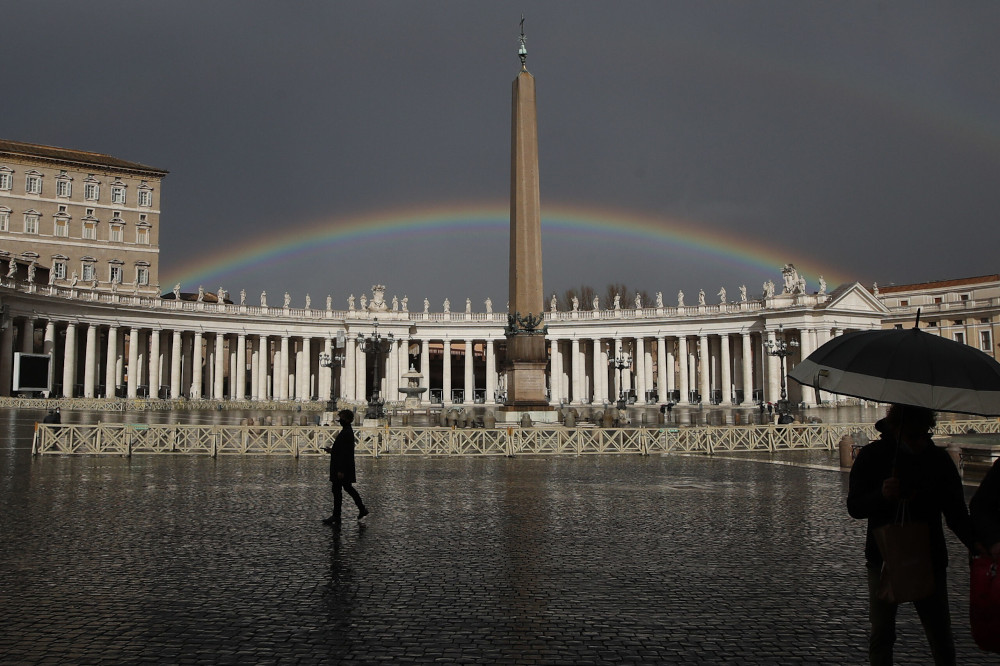 A rainbow shines over St. Peter's Square at the Vatican on Jan. 31, 2021. (AP file photo/Alessandra Tarantino)

During the characteristically bombastic celebrations for Pride Month in many countries all over the world this June, the Catholic Church, guided by Pope Francis, has quietly shown welcome to the LGBTQ community, while avoiding changes to doctrine.

"Catholic LGBTQ ministry has been expanding astronomically in the last decade," said Francis DeBernardo, executive director at New Ways Ministry, a Catholic outreach program aimed at promoting inclusion and justice for the LGBTQ community, in a comment to Religion News Service on June 24.

"Pope Francis' welcoming statements and gestures are the main reason for this greater openness to LGBTQ people," he added.

Six transexual women from different cultural and social backgrounds walked into the Vatican for a private audience with Francis on June 22. The meeting was not announced on the pope's daily schedule and was organized by Sr. Genevieve Jeanningros, 79, known for her work with marginalized groups, including circus performers, the homeless and members of the trans community.

Jeanningros, who does her ministry from a chapel located in a small caravan parked next to a funfair in the Roman port town of Ostia, has known the pope since his election in 2013. She told the Italian online media outlet Fanpage that she asked Francis if she could bring more than one person to the Vatican, to which he allegedly answered: "Bring them all."

One of the transgender women who visited the pope, Alessia, said the meeting with Francis "was emotional" and "they felt welcomed."

"On Pride Month I think this is an important message," she said. "The best part of having spoken to Pope Francis is that it was simply a meeting among people and not focused on our differences."

This isn't the first time Francis, who once worked as a nightclub bouncer in his native town of Buenos Aires, Argentina, has shown openness and interest in welcoming members of the LGBTQ community. During the pandemic, he asked papal almoner Cardinal Konrad Krajewski to support a group of transgender sex workers who had found refuge in a parish on the outskirts of Rome. The pope has written letters of encouragement to Catholics who minister to the LGBTQ community all over the world, and on Easter of 2021 he invited a trans community in Rome to meet him at the Vatican and helped them get vaccinated against COVID-19.

Francis "has given people courage, and his approach of dialogue and accompaniment has given people a Catholic explanation for how LGBTQ inclusion can be authentically Catholic," DeBernardo said. 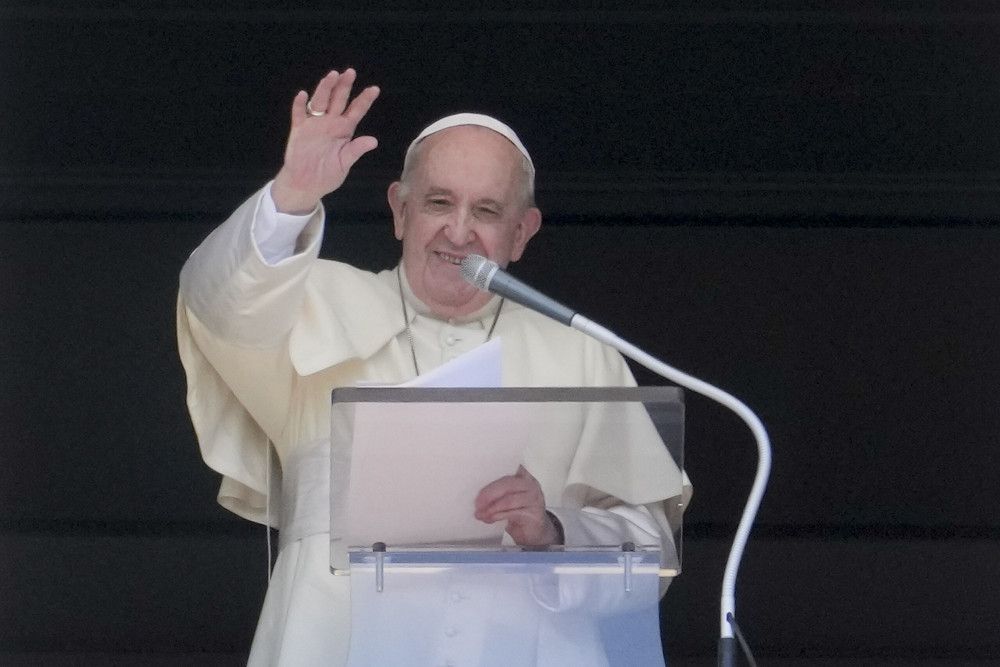 Pope Francis delivers his blessing as he recites the Angelus noon prayer from the window of his studio overlooking St. Peter's Square at the Vatican Sept. 5, 2021. (AP/Andrew Medichini)

The Catholic Church has not made any changes to doctrine concerning LGBTQ people, and according to its catechism, homosexual acts are "intrinsically disordered." But Francis' message of welcome and inclusion toward marginalized people has had ripple effects in the Catholic Church, effects that have become especially evident during this Pride Month.

On Father's Day (June 19), Alex Shingleton and Landon Duyka, a civilly married gay couple with two daughters, stood before congregants at Old Saint Patrick's Church in the Chicago Archdiocese to read a reflection on the homily.

"In all honesty, if you had told us as young boys who wasted countless hours of our lives in church trying to 'pray the gay away' that we someday would be standing in front of all of you in our Catholic Church talking about our family on Father's Day, we would never have believed you," they said in their reflection. 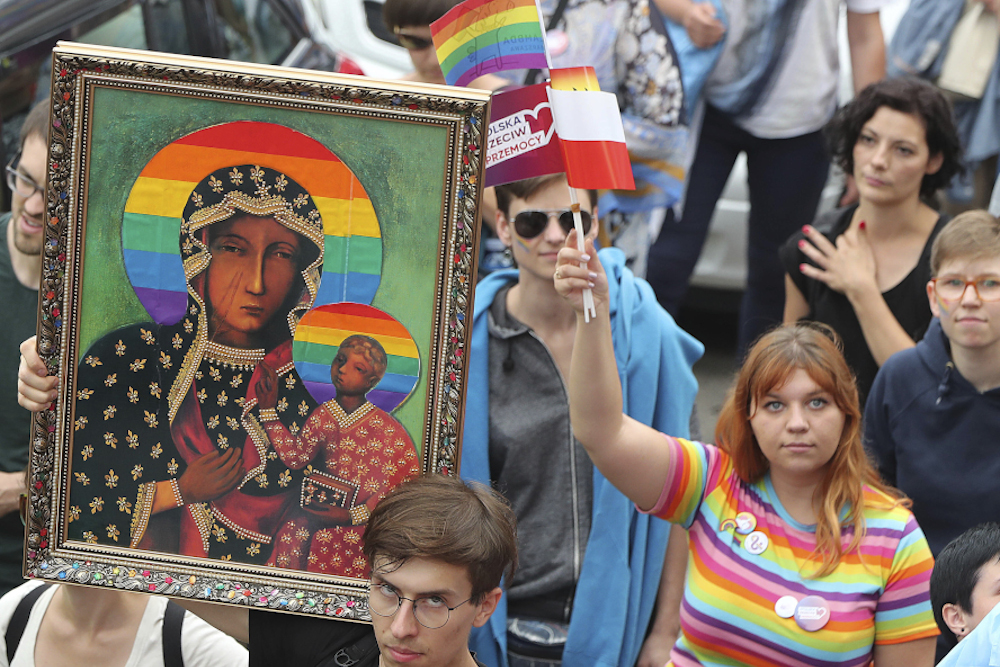 LGBTQ activists and supporters gather for the first-ever pride parade in the central city of Plock, Poland, on Aug. 10, 2019. (AP/Czarek Sokolowski)

Chicago Cardinal Blaze Cupich has been an outspoken advocate for redoubling the Catholic Church's effort to promote inclusivity and welcome of LGBTQ persons.

The Jesuit university of Fordham in New York City will be hosting a conference June 24–25 called "Outreach 2022: LGBTQ Catholic Ministry Conference," which will address questions on how to minister to LGBTQ individuals in parishes, schools and at work. Bishop John Stowe of Lexington, Kentucky, will be the keynote speaker at the conference, which will also tackle questions on mental health, race and theology for LGBTQ Catholics.

Across the Atlantic Ocean, in Germany, the Catholic Church has undertaken a "Synodal Path," a massive consultation among bishops and the laity, to address issues ranging from female ordination to sexuality.

Yet, despite these welcoming signals, the Vatican's Congregation for the Doctrine of the Faith issued a statement in March 2021 banning the blessing of gay couples, citing the concern that faithful might consider such unions equivalent to marriage between a man and a woman and stating that the Catholic Church "cannot bless sin."

The decision was met with shock and dismay by many LGBTQ Catholics who hoped Francis had ushered in a new era of acceptance within the church. Just weeks after the ban, German priests, in open defiance, blessed numerous gay couples in hundreds of ceremonies around the country. 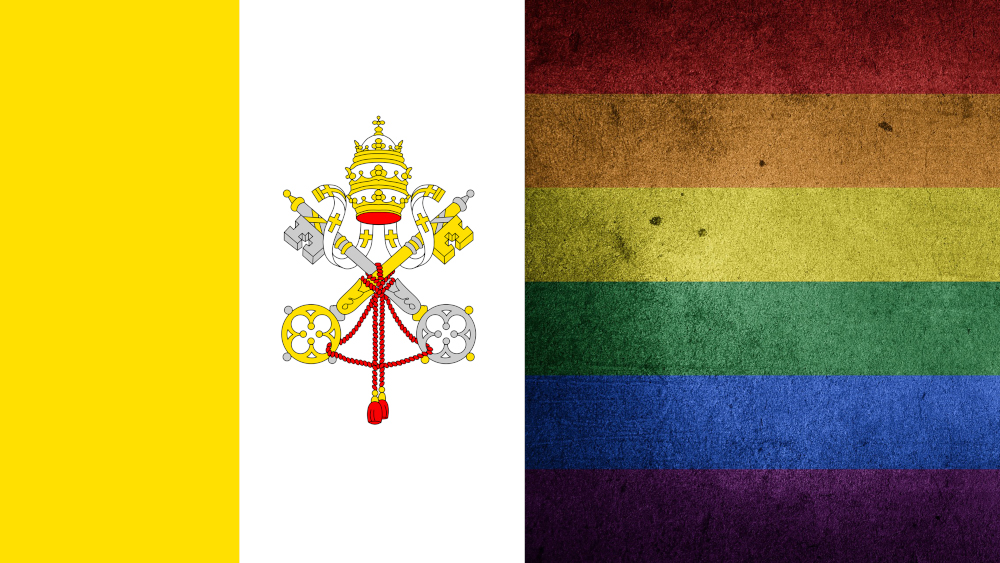 Pietro Morotti and Giacomo Spagnoli, a gay couple in Bologna, Italy, were among those who voiced on social media their disappointment in the Vatican ban. And this year, on June 11, after being civilly married, the couple walked to their nearby church of San Lorenzo di Budrio for an intimate "Thanksgiving Mass" with friends and priests. News of the event led to indignation by some Catholics, who saw the ceremony as in direct violation of the Vatican's doctrinal decision.

Fr. Maurizio Mattarelli, who oversees a parish group for the accompaniment of LGBTQ faithful called "In Cammino" (On the Way) told local media that the couple participated in his program and had been part of his parish for 30 years.

"Just a word of advice, don't make theoretical judgements," he said. "Try to get to know these two people, or homosexual couples, who participate in our group, in person."

"The church is called to unite, not divide," he added.

In a statement June 19, the Archdiocese of Bologna clarified the Mass was not a blessing of the union, adding that the diocese stands in opposition to "all discrimination and violence based on sexuality."

The head of the Archdiocese of Bologna, Cardinal Matteo Maria Zuppi, was recently selected by Francis to head the Italian Bishops Conference — a promotion viewed by some as the pope's encouragement for a change of direction among the traditionally conservative episcopacy in Italy. 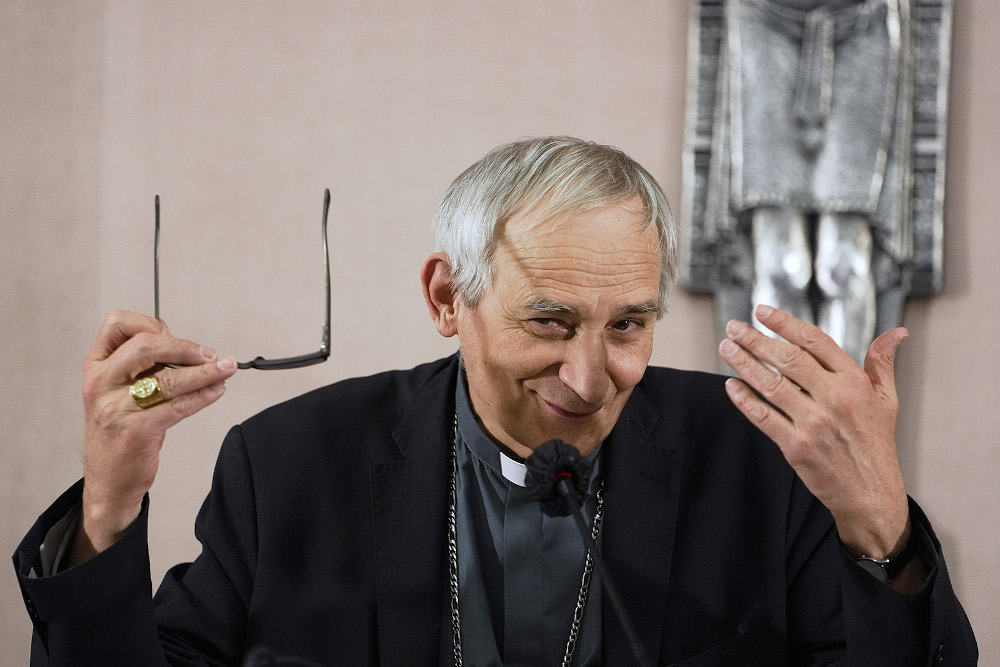 Cardinal Matteo Zuppi, the new head of the Italian bishops' conference, talks during a press conference in Rome May 27. (AP/Alessandra Tarantino)

In 2018, Zuppi wrote the preface for the book Building a Bridge by Jesuit Fr. James Martin, promoting welcome and outreach to the LGBTQ community. In 2020, the cardinal wrote another preface for a book by Italian journalist Luciano di Moia, The Church and Homosexuality, offering pastoral guidelines to minister to gay Catholics.

"When our communities will begin to truly see people as God sees them, including homosexual people and everyone else, they will naturally begin to feel part of the ecclesial community, on the way," Zuppi wrote in the preface to the book by di Moia.

Along with the promotion of Zuppi — considered 'papabile' by some, meaning eligible to be elected pope —Francis has also been making moves to diminish the power of the Vatican's doctrinal department this year. His apostolic constitution, Praedicate Evangelium or "Preach the Gospel," published in March, stripped the department of some of its teeth, placing an emphasis on dialoguing with those who hold dissenting opinions, rather than imposing sentences.

And earlier, in January, the pope removed Archbishop Giacomo Morandi, the No. 2 official at the doctrinal department, considered responsible for the document banning gay blessings, from his position.

LGBTQ outreach and ministry "used to be something that was done rather secretly, with pastoral leaders wanting to stay under the radar," said DeBernardo, but thanks to the efforts of Francis and others, he believes this work can now be done without as much fear of controversy or reprimand.

"In more and more parishes, LGBTQ people are not only welcome, but are becoming ministry leaders in all kinds of activities and programs, not just LGBTQ outreach efforts," he said.