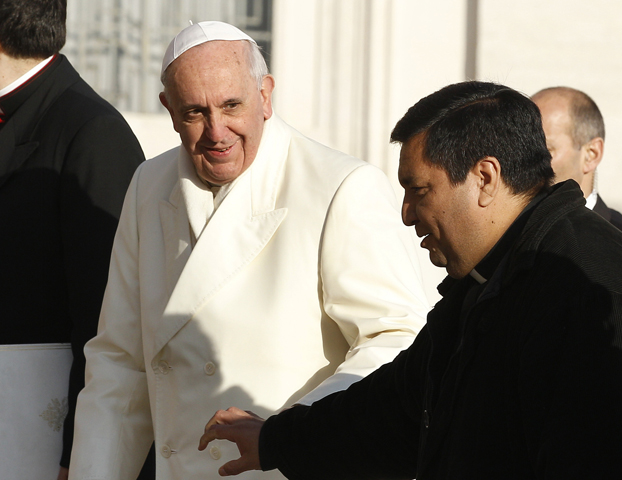 Pope Francis walks with Fr. Fabian Baez from Buenos Aires, Argentina, as the pope arrived to lead his general audience Wednesday in St. Peter's Square at the Vatican. The pope spotted the priest in the crowd and invited him to board the popemobile. (CNS/Paul Haring)

When Fr. Fabian Baez booked his trip to Rome, he didn't have an appointment to meet with the pope, so he gave himself ample time in the Eternal City to be able to arrange some way to see him.

A week and a half in Rome seemed like plenty of time to meet up with the pope "because I thought I needed to find a ticket, to get a ticket to a general audience. Instead he found me," the priest told Catholic News Service on Thursday.

Baez, a parish priest in the pope's former archdiocese of Buenos Aires, arrived in Rome late Tuesday but did not manage to get a ticket to the next day's general audience in St. Peter's Square.

He said he did not worry about it because he still had another week to try. He went to hear the catechesis anyway, sending out a message on Twitter saying he was on his way to the square.

Little did he know a short time later, he would end up having the best seat in the house: first with the pope on the popemobile, then VIP seating during the audience talk.

Baez said: "I had no ticket so I couldn't really come into the square. I was outside the audience area. But he saw me from a distance."

The pope yelled to him, "What are you doing here?" the priest said. And he yelled back, "I came to see you!"

The pope had the driver stop the vehicle. He gestured to the priest to come, "And I ran as best I could," squeezing past the people pressed in front of him, past the large wooden barricades snaking through the square and past a large security detail that is now used to protocol being thrown to the wind.

The pope said, "Come, get on!" and gave the priest an empty seat next to his papal assistant.

The priest said later, when he thought about it, he felt that phrase "Come, get on" was also meant for the whole world.

"When he invited me, he invited all priests to be near the people," he said, and the pope was also inviting all people "to stand up, rise up and go," and lift their hearts and lives up to the Lord.

When the priest from the church of Our Lady of the Pillar climbed onto the popemobile, the pope told him, "The picture will go around the world," as many unique and touching images capturing the pope interacting with those around him have.

"I really didn't think about that" and the instant fame he was going to have "because I was just so happy to see him. I've known him for 20 years; he was my bishop for 15."

"I hadn't seen him since he became pope and I really wanted to see him and give him a big hug. I was so happy because I saw him and we spoke."

Baez spoke very fondly of his former bishop: "He's a very good priest, whether he was a bishop, a pope, he is first and foremost a priest.

"He showed all of us priests how to be a priest, how to care for people, to be a pastor with the smell of sheep," he said.

Baez's parish runs a school and two residential homes: one for girls to live in while doing studies and one for homeless women with children.

"We're not a poor parish, but we work for the poor," he told Catholic News Service.

The priest said Pope Francis "is the same man he was as a priest and as a bishop," and his recent apostolic exhortation Evangelii Gaudium ("The Joy of the Gospel"), contains "everything he thinks, everything he believes, does and says" in his ministry -- "to proclaim Christ's love."

As a bishop, the pope always needed to demonstrate that love and show it by example, the priest said, so "I think it is difficult for him" being pope because his actions and mobility are more limited.

"He likes people, he likes being with the poor, hearing confession ..." he said.

Baez has seen a large uptick in his Twitter following.

He's replaced his header image with one of him and the pope hugging at the end of the general audience and added a new bio: "Priest in Buenos Aires. The pope once invited me to get on the popemobile with him. My mission is to be a pastor and I am on Twitter because I want you to get closer to God."