by Junno Arocho Esteves, Catholic News Service
Vatican
This article appears in the Synod for the Amazon feature series. View the full series. 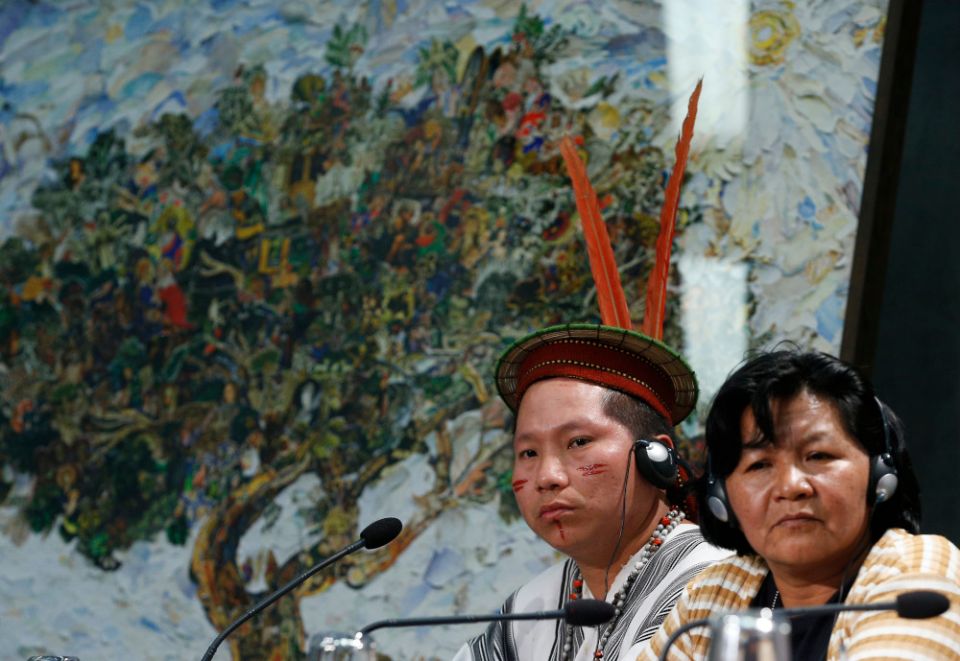 Delio Siticonatzi Camaiteri, a member of the Ashaninca indigenous people in Peru, and Sister Mariluce dos Santos Mesquita, a member of the Barassana people in Brazil, attend a news conference after a session of the Synod of Bishops for the Amazon at the Vatican Oct. 24, 2019. (CNS/Paul Haring)

Vatican City — At a synod briefing Oct. 24, Delio Siticonatzi Camaiteri, a member of the Ashaninka people and a professor from Peru, said that fears about the proposal are unwarranted because indigenous people seek unity and not division.

"Do we (want to) have our own rites? Yes, we do! But those rites must be incorporated with what is central, which is Jesus Christ. There is nothing else to argue about on this issue! The center that is uniting us in this synod is Jesus Christ," he said.

Throughout the synod, members discussed the possibility of incorporating local traditions and cultural elements in the liturgy. While there are nearly two dozen different rites in the Catholic Church, those critical of the proposal fear that it would introduce so-called pagan elements into the liturgy.

Speaking to journalists at the briefing, Siticonatzi said that he noticed those present seemed "a bit uncomfortable" and did not "understand what the Amazon truly needs" when it comes to establishing a new rite.

Nevertheless, he added, there are many who are "doubtful of this reality that we are looking for as indigenous people."

"Do not harden your hearts! Soften your hearts; that is what Jesus invites us to do," he said. "We live together. We all believe in one God! At the end of it all, we are going to be united."

Mexican Father Eleazar Lopez Hernandez, a member of the Zapotec community and an expert on indigenous theology, told journalists that like the members of other rites in the Catholic Church, the churches in Latin America also "need to be able to express our faith within our own framework."

"This is what the Amazonian rite is based on," Lopez said. "We can no longer continue living within frameworks that are foreign to our people. This is alienation."

The Mexican theologian said that discussions regarding the creation of an Amazonian rite were "encouraged" by a principle formulated by St. Thomas Aquinas: "(Quidquid) recipitur ad modum recipientis recipitur" ("Whatever is received is received in the manner of the receiver").

"Our peoples had their own religious experiences, they had theologies that gave meaning to their lives," he said. "When the Christian perspective arrived, they received it within those frameworks."

When it comes to the liturgy, he continued, Christians have a responsibility to know the difference between "what is substantial in the Christian perspective and what is secondary, what is cultural."

"Pope Francis told us that it isn't right to think of the Christian perspective, the life of the church, through a monotonous and monocultural expression," Lopez said. "The church is plural. We have to take back the original diversity of the churches; united in one faith but with distinct theological and liturgical expressions."

Update on who is to be cardinal

Editorial: Bishops need to be courageous, listen to the people