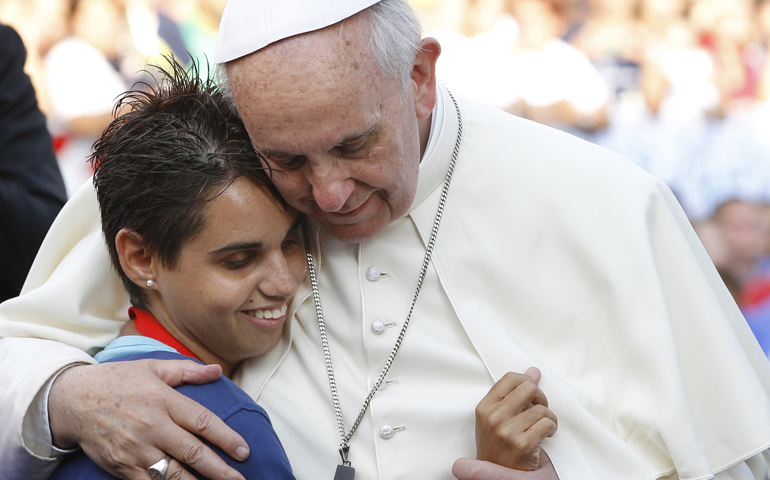 This is the first of a series of articles examining Pope Francis' recent interviews. A new article will be published each day this week on NCRonline.org.

Pope Francis shows courage: not only in his brave appearance in the favelas of Rio de Janeiro, but also by entering into an open dialogue with critical nonbelievers. He has written an open letter to leading Italian intellectual Eugenio Scalfari, founder and longtime editor in chief of the major liberal Roman daily newspaper La Repubblica. These are not papal instructions, but a friendly exchange of arguments on equal levels.

Among the 12 questions from Scalfari printed in La Repubblica Sept. 11, the fourth seems to me of particular importance for a church leadership ready for reforms: Jesus perceived his kingdom not to be of this world -- "Render to Caesar the things that are Caesar's, and to God the things that are God's" -- but the Catholic church especially, writes Scalfari, all too often submits to the temptations of worldly power and represses the spiritual dimension of the church in favor of worldliness. Scalfari's question: "Does Pope Francis represent after all the priority of a poor and pastoral church over an institutional and worldly church?"

Let's focus on the facts:

But he has not yet passed the decisive test of his will to reform. It is understandable and pleasing that a Latin American bishop puts the poor in the favelas of the great metropolises first. But the pope of the Catholic church cannot lose sight the fact that other groups of people in other countries suffer from other kinds of "poverty," and also yearn for the improvement of their situation. And these are people whom the pope can support even more directly than he can those in the favelas, for whom state organizations and society in general are primarily responsible.

The synoptic Gospels have developed a broader notion of poverty. In the Gospel of Luke, the beatitude of the poor refers without a doubt to the really poor, poor in a material sense. But in Matthew's Gospel, this beatitude refers to the "poor in spirit," the spiritually poor, who, as beggars before God, are aware of their spiritual poverty. Thus, in line with the other beatitudes, it includes not just the poor and hungry, but also those who cry, who are left out, marginalized, neglected, excluded, exploited, desperate. Jesus calls both the miserable and lost ones in a situation of extreme affliction (Luke) and those in a situation of inner distress (Matthew), all those who are weary and burdened, including those burdened by guilt.

Thus the number of poor who need support multiplies many times over. Support in particular from the pope, who can help more than others, due to his office. Support from him as the representative of the ecclesiastical institution and tradition means more than just comforting and encouraging words; it means deeds of mercy and charity. Offhand, three large groups of people come to mind who are "poor" in the Catholic church.

First, the divorced. From many countries and counted in the millions, many are excluded from the sacraments of the church for their whole life because they have remarried. Today's greater social mobility, flexibility and liberality as well as a noticeably longer life expectancy make greater demands on partners in a lifelong relationship. Certainly, the pope will emphatically uphold the necessary indissolubility of marriage even under these aggravating conditions. But this commandment will not be understood as an apodictic condemnation of those who fail and cannot expect forgiveness.

Rather, this commandment expresses a goal that demands lifelong faithfulness, as it is lived by innumerous couples already, but cannot be guaranteed. The mercy that Francis calls for would allow the church to admit divorced and remarried persons to the sacraments if they seriously wish it.

Second, women who are ostracized in the church because of the ecclesiastical position regarding contraception, artificial insemination and also abortion, and often find themselves in a situation of spiritual distress. There are millions of them in the whole world. Only a tiny minority of Catholic women obey the papal prohibition to practice "artificial" contraception, and many with a good conscience use artificial insemination. Abortion should not be banalized or even be used as a means of birth control. But women who for serious reasons decided to have an abortion, often experiencing great moral conflict, deserve understanding and mercy.

Third, priests who had to leave the priesthood because they married. Across the continents, they number in the tens of thousands. Many suitable young men do not even become priests in the first place because of the commandment of celibacy. Without doubt, voluntary celibacy of priests will continue to have its place in the Catholic church. But the legal commandment that church officials remain unmarried contradicts the freedom guaranteed in the New Testament, the ecumenic tradition of the first millennium and modern human rights. The abolition of mandatory celibacy would represent the most effective means against the catastrophic shortage of priests noticeable everywhere and the related collapse of pastoral care. Should the church maintain mandatory celibacy, there is no thinking of the desirable ordination of women into the priesthood.

All these reforms are urgent and should first be discussed in the summit of eight cardinals, which is to meet Oct. 1-2. Francis faces important decisions here. He has already shown great sensitivity and empathy with the hardships of people, and proved considerable courage in various situations. These qualities enable him to make the necessary and forward-looking decisions regarding these issues, some of which have been a problem for centuries.

In his interview, published Sept. 20 in Jesuit journals worldwide, including La Civiltà Cattolica and America, Francis recognizes the importance of questions such as contraception, homosexuality and abortion. But he refuses to put these questions too much at the center of the church's mission. He rightly calls for a "new balance" between these moral issues and the essential impulses of the Gospel itself. But this balance can only be reached when reforms that were postponed again and again are realized, so that these fundamentally secondary moral issues will not rob the proclamation of the Gospel of its "freshness and attractiveness." This will be the great challenge for Francis.

[Fr. Hans Küng, Swiss citizen, is professor emeritus of ecumenical theology at Tübingen University in Germany. He is the honorary president of the Global Ethic Foundation (www.weltethos.org). His book Can the Catholic Church Be Saved? will be available in English on Oct. 10.]

A version of this story appeared in the Oct 11-24, 2013 print issue under the headline: Mercy for the spiritually poor essential for reform.