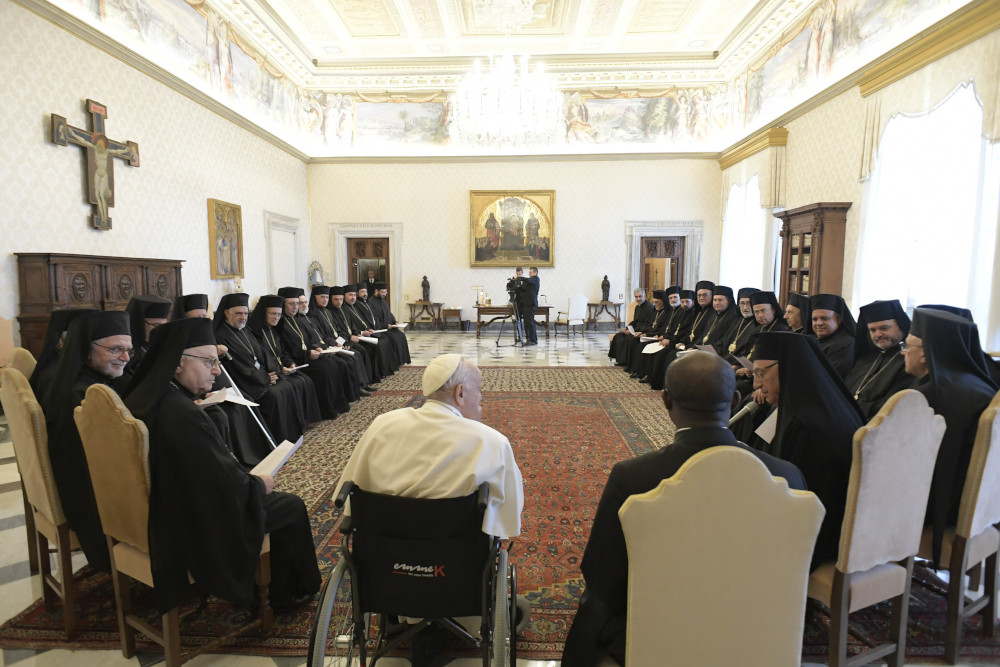 Pope Francis leads an audience with members of the synod of the Melkite Catholic Church at the Vatican June 20, 2022. The pope said he shared their concern about the dwindling Christian population of the Middle East. (CNS photo/Vatican Media)

While the world must pay attention to Russia's war on Ukraine, it cannot forget Syria and its people, which have been under the threat of bombs and violence for a dozen years, Pope Francis said.

"You are rightly concerned about the survival of Christians in the Middle East -- so am I. It is a concern, one that I fully share," Pope Francis told members of the synod of bishops of Melkite Catholic Church, which has its patriarchate in Syria, but also has large communities in Lebanon, Jordan, Israel, Palestine and Egypt.

The Melkite bishops were holding their annual synod in Rome and met with Francis June 20.

"The drama of recent months, which sadly forces us to turn our gaze to Eastern Europe, must not make us forget what has been going on for 12 years in your land," he told the bishops, led by Patriarch Joseph Absi, who is based in Damascus, Syria.

Francis recalled the prayer vigil for Syria he presided over in St. Peter's Square in September 2013 with the Blessed Sacrament and thousands of people gathered in prayer. "There were also Muslims there, who had brought their mats and were praying with us."

During the vigil, the pope referred to "beloved and battered Syria," an expression that still holds true, he said, with "thousands of dead and wounded, millions of refugees inside and abroad, the impossibility of starting the necessary reconstruction."

Francis also told the bishops that several times he has met young Syrian refugees in Rome and has been "struck by the drama they carry with them from what they have experienced and seen, but also by their gaze, almost drained of hope, unable to dream of a future for their homeland."

"We cannot allow the last spark of hope to be taken out of the eyes and hearts of young people and families," the pope said. "I therefore renew my appeal to all those who have responsibility, within the country and in the international community, so that a fair and just solution to the drama of Syria can be reached."

With Catholics worldwide engaged in a process to learn to be more "synodal," valuing the contributions and collaboration of all the baptized, Francis asked the Melkite Church to review "the synodal style of your being and acting, according to what I have asked of the universal church: your ability to live the communion of prayer and intent between yourselves and with the patriarch, between the bishops and the priests and deacons, with the religious men and women, and with the lay faithful, all together forming the holy people of God."

Like the other patriarchal churches, the Melkite Church's synod directly elects bishops for its traditional territories, and they are confirmed by the pope.

Francis told them, "I beg you to always reflect well and pray to the Holy Spirit to enlighten you, preparing adequately and well in advance the material and information on the different candidates, overcoming all logic of partisanship" or even attempts to balance the number of bishops coming from different religious orders.

And, he said, to ensure that the true "face of the church, which Christ purchased with his blood, shines forth," the bishops must shun all temptations of "divisions and murmurings, which do nothing but scandalize the little ones and scatter the flock entrusted to you. On this I pause: beware of gossip. Please, none of it. If one has something to say to another, say it to his face, charitably, but to his face. Like men."

Gossip, he said, is "woodworm that destroys the church."