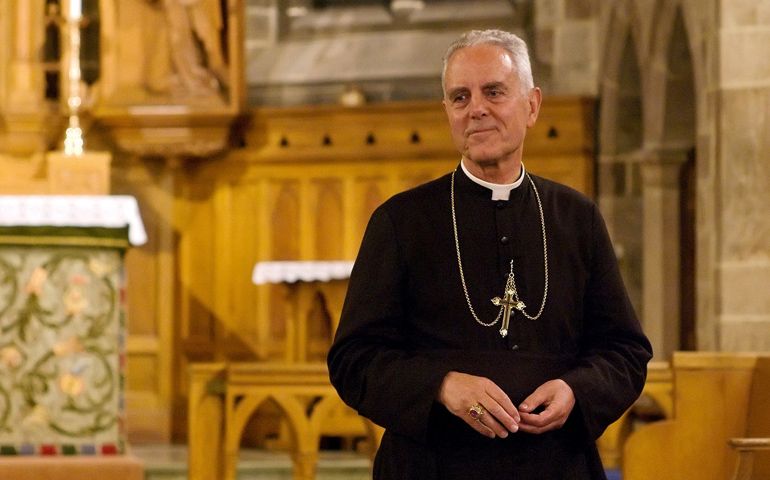 Bishop Richard Williamson is seen in a church in Stockholm, Sweden, in June 2008. (CNS/Catholic Press Photo)

Vatican City — The leadership of the traditionalist Society of St. Pius X has expelled British Bishop Richard Williamson from the society, saying he distanced himself from them and refused "to show due respect and obedience to his lawful superiors."

"This painful decision has become necessary by concern for the common good of the Society of St. Pius X and its good government," said a brief note posted on the group's website Wednesday.

Williamson had been a harsh critic of the group's engagement in doctrinal discussions with the Vatican, which were aimed at bringing the society back into full communion with the Catholic church.

In comments published Sept. 1 in a newsletter that Williamson emails to subscribers, he wrote that the SSPX had set out six conditions for reconciliation with Rome, which included: freedom "to teach the unchanging truth of Catholic tradition"; freedom to criticize "the errors" of the Second Vatican Council; freedom to celebrate only the extraordinary form of the Mass; the promise of at least one new bishop; and the independence of SSPX houses from the oversight of the local diocesan bishop.

In the September letter, Williamson said, the SSPX position was "no longer 'Rome must convert because truth is absolute,' but now merely 'the SSPX demands freedom for itself to tell the truth.' Instead of attacking the (Vatican II) conciliar treachery, the SSPX now wants the traitors to give it permission to tell the truth?"

The bishop concluded, "Unless the society's leadership is shaken out of its dream of peace with conciliar Rome ... then the last worldwide bastion of Catholic tradition risks being on its way to surrendering to the enemies of the faith."

The statement announcing the ouster of Williamson from the SSPX said the decision was made by the superior general, Bishop Bernard Fellay, and by members of the SSPX council. It said the SSPX leadership met Oct. 4 and gave Williamson a deadline of Wednesday "to declare his submission" to the SSPX leaders.

Instead, the statement said, Williamson sent a letter resigning from the group.

Even as the Vatican negotiated with the SSPX, Vatican officials said separate discussions would be required with Williamson, who not only criticized the dialogue, but has publicly denied the extent of the Nazi Holocaust of the Jews.

The bishop's Holocaust denials were included in an interview aired by a Swedish TV network on the same day in 2009 that the Vatican announced Pope Benedict XVI had lifted the excommunication of Williamson and three other of the society's bishops, ordained without papal permission in 1988.The pope later repudiated Williamson's remarks, saying he had been unaware of the bishop's views on the Holocaust. The pope met with Jewish leaders at the time to calm tensions over the incident.

Additionally, the Vatican told Williamson he would not be welcomed into full communion in the church unless he disavowed his remarks about the Holocaust and publicly apologized.

After lifting the excommunications, Pope Benedict launched a new series of doctrinal discussions with the SSPX in 2009. As the discussions progressed, the Vatican asked SSPX leaders to sign a "doctrinal preamble,"' which outlines principles and criteria necessary to guarantee fidelity to the church and its teaching.

When it appeared Fellay was close to signing an agreement with the Vatican, internal tensions within the SSPX erupted. Williamson was excluded from the July general chapter meeting of the SSPX "due to his stand calling to rebellion and for continually repeated disobedience," according to a letter leaked to the press. Without Williamson present, SSPX leaders recovered their "profound unity," according to a public statement released after the July meeting.

In an early October interview with a German radio station, Archbishop Gerhard Muller, prefect of the Congregation for the Doctrine of the Faith, confirmed that the talks with the SSPX had broken down and that no further discussions had been scheduled.

Vatican condemns leak of documents on differences over economic reform