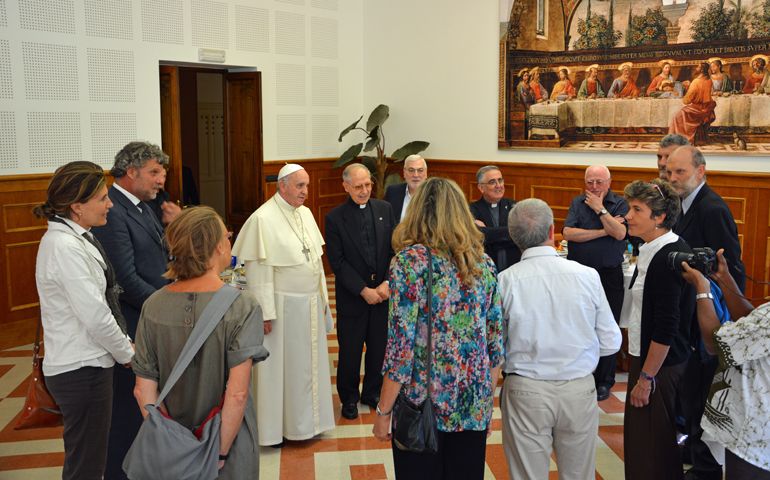 Pope Francis meets the four sisters and three brothers of Jesuit Fr. Paolo Dall'Oglio, missing and presumed kidnapped in northern Syria since July 29, 2013. The pope met the family at the Jesuit headquarters in Rome, where they all joined the Jesuit community for lunch. (CNS photo courtesy Infosj, Rome)

Rome — Pope Francis, a Jesuit, celebrated the feast of St. Ignatius of Loyola by meeting the family of a Jesuit kidnapped in Syria a year ago and joining them and priests at the Jesuit headquarters for lunch.

Jesuit Fr. Giuseppe Bellucci said the pope had "communicated at the last minute" his desire to join the community at the Jesuit headquarters for lunch Thursday, the feast day of the founder of the Society of Jesus.

"It was a private and simple visit," Bellucci said.

Among those present in the community's refectory were the four sisters and three brothers of Italian Jesuit Fr. Paolo Dall'Oglio, who was believed to have been kidnapped in northern Syria July 29, 2013. He has not been heard from since.

On the first anniversary of his disappearance, one of his brothers and one of his sisters -- speaking on behalf of the family -- posted a video on YouTube asking those responsible for Dall'Oglio's disappearance to let the family know if he is alive or if they should be in mourning.

After lunch, the pope visited one of the chapels in the Jesuit headquarters that had been remodeled with mosaics by Jesuit Fr. Marko Rupnik and joined the community for a quick espresso, served in little plastic cups.

John Dear and the Jesuits