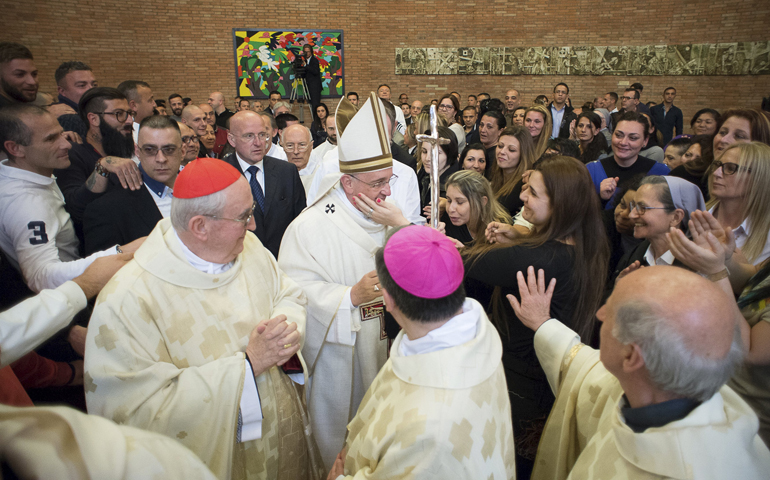 A woman touches Pope Francis' cheek as he meets with inmates and others April 2, Holy Thursday, at Rebibbia prison in Rome. (CNS/Reuters/L'Osservatore Romano)

Pope Francis seems to describe his life in the Vatican almost as if he were in prison -- at least as far as his freedom of movement goes. But that is not the first thing he cites when he talks about what he and prisoners have in common.

When visiting a prison, he said, "I think to myself, 'I, too, could be here.' That is, none of us can be sure that we would never commit a crime, something for which we'd be put in prison."

Pope Francis' comment to a reporter from a newspaper in Argentina in mid-May was just the most recent time he has spoken about how everyone makes mistakes, everyone sins, and if one's personal history and circumstances were different, he or she could be that convict.

"They haven't had the opportunities that I have had of not doing something stupid and ending up in prison," he told the newspaper, La Voz del Pueblo. "This makes me cry inside. It is deeply moving."

Continuing a practice he began as archbishop of Buenos Aires, Argentina, the pope has spent plenty of time behind bars: He celebrated Holy Thursday Mass in a juvenile detention facility in 2013 and at Rome's Rebibbia prison in 2015; he visited the Poggioreale prison outside Naples in March; and in the summer of 2014, visited inmates during trips to both Calabria and Isernia.

Even as pope, he continues to make a phone call every other Saturday to young inmates he used to visit regularly in a Buenos Aires prison.

He is scheduled to spend time Saturday with hundreds of children of Italian inmates, including some children who had lived in jail with their mothers. Italian law encourages house arrest for convicted mothers of small children or confinement with their children in supervised group homes. However, when that is not feasible, the law allows children to live with their mothers in prison until the age of 6.

When he goes to northern Italy in late June to venerate the Shroud of Turin, he is scheduled to have Sunday lunch with a group of juvenile offenders from the Ferrante Aporti facility. And, during his July trip to South America, he is scheduled to visit the maximum-security Palmasola prison in Santa Cruz, Bolivia.

Pope Francis' talks to prisoners always focus on the wideness of God's mercy.

His talks about prisons always focus on the need to ensure incarceration is designed not only as punishment, but as a process of education and socialization preparing a person to return to society and function as a law-abiding citizen.

In a wide variety of settings, Pope Francis cites Matthew 25 and its judgment day list: Did you feed the hungry, clothe the naked and visit prisoners?

During a general audience talk in 2014, when he was explaining how the church is "a mother who teaches us the works of mercy," the pope said he knew many people feel uncomfortable with the very idea of visiting someone in prison. They think, "It's dangerous! They are bad people," he said.

"Listen up," he told thousands of people gathered in St. Peter's Square for the audience. "Each one of us is capable of doing the same thing done by that man or woman in jail. All of us are capable of sinning and making the same mistake in life. They are not worse than you and I!"

Showing mercy to those who have strayed can be life changing, he said. "Mercy overcomes every wall, every obstacle" and can instill new life and hope in others.

While it may be easy to recognize a prisoner's need for mercy and conversion, Pope Francis assures the inmates he visits that asking for God's mercy and the strength to convert is the lifelong task of every Christian.

Visiting the Isernia prison last year, the pope told inmates, "We all make mistakes in life. And we all must ask forgiveness and make a journey of rehabilitation so we don't make them again."

Some people, he said, are able to "do this in their own homes and in their own professions. Others, like you, do this in a prison. But all of us, all of us -- anyone who says they do not need to go through a process of rehabilitation is a liar."

Pope Francis' most systematic discussion of crime and punishment came in a long speech he gave last October to the International Association of Penal Law. The speech made headlines when the pope called for a global abolition of the death penalty and asserted that "a life sentence is just a death penalty in disguise."

But he also looked at the sociological and political realities behind what he described as "the vengeful trend which permeates society" and politicians pandering to that fear by legislating penalties that, he said, are not proportionate to the crime.