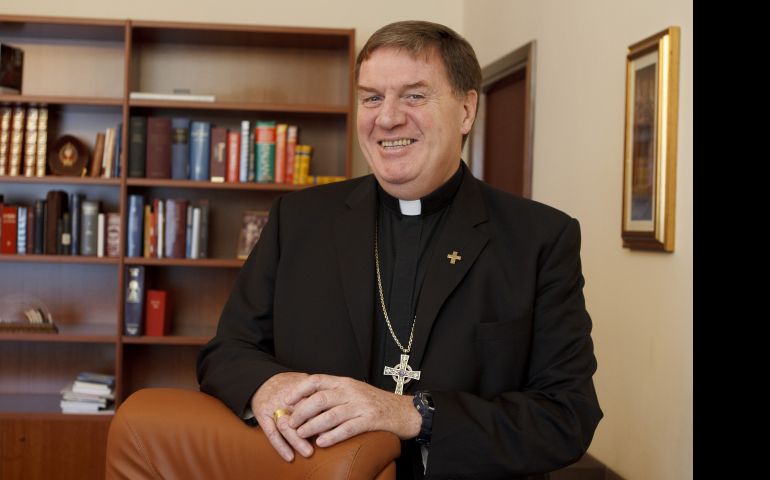 Rome — In the small world of the Vatican, personnel is always policy. Two recent personnel moves, therefore, have fueled speculation about whether policy shifts are also under way in the fight against sex abuse and the Vatican's relationship with American nuns.

Msgr. Charles Scicluna, the Vatican's top prosecutor on abuse cases, was named an auxiliary bishop in his native Malta on Oct. 8. On Thursday, the pope was also set to name American Archbishop Joseph Tobin, the Vatican's leading voice for reconciliation with women religious, as the new archbishop of Indianapolis.

The question now is whether the positions these two figures represent are also on the way out. Some are reading their departures as classic cases of promoveatur ut amoveatur, meaning promoting someone to get rid of them and, by extension, their ideas. Vatican officials say it's not so, insisting there are more effective ways of muzzling someone than the new gigs both men are getting.

Especially with Tobin, it's hard not to see office politics at work. He's only served as secretary of the Congregation for Institutes of Consecrated Life and Societies of Apostolic Life (popularly known as the Congregation for Religious) since August 2010, while Vatican officials normally have at least a five-year term. When rumors of his move to Indianapolis heated up in October, several commentators speculated it was related to his "soft" line on religious women in the United States.

Italian commentator Marco Tosatti wrote Oct. 1 that some in the U.S. church "did not appreciate Tobin's role in clearing up misunderstandings with 'rebel' nuns. American bishops did not find his conciliatory statements very helpful as they were hard at work trying to resolve a difficult problem."

"They saw his attitude as a break with the position taken by the previous prefect [of the Congregation for Religious], Cardinal Franc Rodé, who was concerned about the 'new age' drift of many U.S. nuns," Tosatti wrote.

The reference was to the sweeping apostolic visitation of women's religious orders in America launched by the Congregation for Religious under Rodé in late 2008. That process elicited protest among many sisters, who saw it as a vote of no confidence.

The tone from Rome changed with Tobin's arrival, and was reinforced in January 2011 when Brazilian Archbishop João Bráz de Aviz replaced Rodé. (Bráz has since become a cardinal.) Both Tobin and Bráz are perceived as moderates, and both have sent signals to women religious that they want the results of the visitation to be constructive rather than punitive.

When the Congregation for the Doctrine of the Faith issued a critical assessment of the Leadership Conference of Women Religious earlier this year, including demands for a sweeping overhaul of the main umbrella group for leaders of women's orders in the United States, sources reported that both Bráz and Tobin expressed reservations about the timing, especially since it came at a moment when an alleged "war on women" was a hot potato in American politics.

Sources told NCR that Bráz appealed to Pope Benedict XVI earlier in the year that Tobin be left in place, but his move to Indianapolis went ahead.

Some insiders, however, say it's not clear that Tobin's departure necessarily betokens a harder line. Bráz is still around, they point out, and the new prefect of the doctrinal congregation, Archbishop Gerhard Müller, is a German who doesn't feel the same personal investment in the fate of American nuns as his predecessor, American Cardinal William Levada.

Moreover, they say, it's not as if Tobin is leaving in disgrace. A senior Vatican official told NCR on Monday that Indianapolis is "nothing to sneeze at," noting that it has both an important Benedictine monastery and seminary. (St. Meinrad is the fifth-largest American seminary by enrollment.)

As a member of the American bishops' conference, this official noted, Tobin can still play a key role in forging the bishops' relationship with women religious.

"If they really wanted to park him," this official said, "they would have given him the elemosineria or something," referring to a Vatican office that dispenses official blessings in the name of the pope and is generally considered a low-profile position.

One test of whether Tobin's departure signals a sea change should come when the Congregation for Religious releases its final report on the apostolic visitation, which is expected soon.

Scicluna's move likewise has raised questions, as he's been the Vatican's most outspoken voice demanding an end to what he described as a "culture of silence" on sex abuse. Scicluna led the investigation that resulted in a May 2006 decision by Benedict to sentence prominent Mexican Fr. Marcial Maciel Degollado, founder of the Legionaries of Christ, to a life of "prayer and penance."

Vatican officials, however, say it's even harder to make a case that Scicluna is being sent into exile.

For one thing, he's been working in the Vatican since 1995. If he hadn't been made a bishop after such a length of time, they say, that would have been the real sign of disapproval. Moreover, Scicluna is still expected to play a role with the Congregation for the Doctrine of the Faith, giving him a voice in setting policy. His leadership should now carry more weight since he'll be speaking as a bishop.

In addition, officials say, Benedict has always backed Scicluna in internal Vatican tussles, and by now has already given most of his reforms the force of permanent church law.

The bottom line, according to one senior Vatican official, is that neither transfer marks the end of the line for the influence that Tobin and Scicluna wield in church affairs.

"If the idea was to make these guys invisible," he said, "there are certainly better ways to go about it."