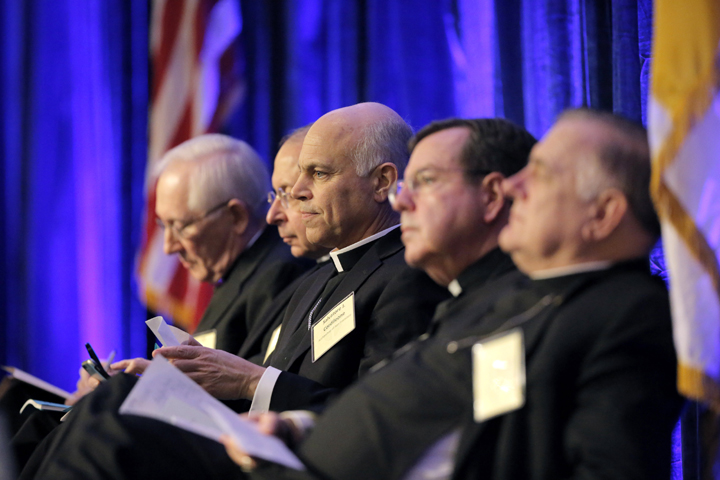 One of the most apparent, if unasked, questions hanging over the annual meeting of the American hierarchy here is how much influence Pope Francis has over the direction and work of the United States Conference of Catholic Bishops. Other issues aside, it became clear Tuesday morning that bishops at least had taken to heart the pope's admonition to engage in robust debate.

Several sharp exchanges over the content of the document "Forming Conscience for Faithful Citizenship" erupted amid an otherwise tranquil gathering that had just approved a document on the corrosive effects of pornography, as well as a request to work up a lighter book for use by the priest at the presider's chair during Mass so younger servers wouldn't have to struggle with the weight of the full Roman Missal.

Things turned a bit more heated, however, when the discussion turned to the content of a re-worked quadrennial statement, "Forming Consciences for Faithful Citizenship," released the year before a presidential election. A year and a half ago, after the election of Francis but before the major themes of his papacy and first solo encyclical -- poverty and the environment -- were firmly established, the bishops had asked a committee to lightly revise the 2007 statement that had been used for the past two election cycles. The revision committee, itself comprising chairmen of 10 conference committees, took suggestions for revisions during the spring meeting.

But the papal ground had shifted even more since that gathering, which occurred before the release of the encyclical on the environment, "Laudato Si', on Care for Our Common Home" and before the whirlwind September visit by Francis to the United States.

The document and its introduction eventually passed by wide margins in separate votes -- 210-to-21 (5 abstentions) and 217-16 (2 abstentions), respectively -- but not before what one bishop, during a brief elevator ride, described as "a passionate moment on the floor" of the conference.

Bishop Gerald Kicanas of Tucson, Ariz., was the first to suggest that the conference needed a new document because "so much has changed" since 2007. With the addition of material attempting to include some of the spirit of Francis as well as the issues he has emphasized, the document "has become very complex and not very helpful."

Cardinal Daniel DiNardo, archbishop of Galveston-Houston and vice president of the conference who led discussion of the document, replied that "the only thing we can say is a vast majority of the bishops" had specifically asked for a revision of the document, not a new one, and that the 10 chairman and conference staff had spent a great deal of effort "to bring various points of view" to bear. He twice said "we vigorously disagree with you" in response to the Kicanas intervention, adding, "We believe there is enough continuity that we think this document is useful."

"At this stage in the conversation," said Archbishop Joseph Kurtz, president of the conference, "I would suggest unless we hear otherwise from the parliamentarian, I think we should take a vote. If indeed, for some reason, it's an introduction to nothing, then we return it."

"How philosophical," replied DiNardo, "an introduction to nothing," a remark that prompted Kurtz to state that "we've had a robust conversation."

It was about to get far more robust.

Bishop Robert McElroy, recently appointed bishop of the diocese of San Diego and widely recognized as a rising intellectual force in the conference, weighed in on the side of abandoning the revised version.

"I think that this vote presents a profoundly difficult choice for us as bishops," he said. The mandate given 18 months ago was to do "a limited revision" of Faithful Citizenship, he said. "The problem is this: That original mandate, in retrospect, is a serious error."

That decision, he said, required that the committee hold to the philosophy and consensus of 2007.  "The problem is, we are not living in 2007. And proceeding through that prism has made it essential for the committee … to keep the prioritization and structure of the original document in place."

The framework, he said, "does not take into account the fact that Pope Francis … rapidly transformed the prioritization of Catholic social teaching and its elements -- not the truth of them, not the substance, but the prioritization of them. [He] has radically transformed that in articulating the claims that fall upon the citizens as believers and disciples of Jesus Christ.

"This document does not do that," McElroy added.

"The key and central point of the failure is this: If I understand Pope Francis correctly, it is that the issue of poverty, particularly global poverty, with all of its victimization of men and women across the world and children, the global poverty and degradation of the earth, which threaten the whole of our humanity, that these two issues lie at the very center and core of Catholic social teaching as priorities for us in every public policy position. And this is not reflected in this document."

McElroy said he believes Francis is telling the church that "alongside the issues of abortion and euthanasia, which are central issues in our effort to transform this world, poverty and the degradation of the earth are also central. But this document keeps to the structure of the world view of 2007. It tilts in favor of abortion and euthanasia and excludes poverty and the environment."

He went on to describe the document as "gravely hobbled" because the mandate given the committee "precludes them from saying in the document what needs to be said, what the pope is asking us to say and more importantly, it provides the words for those who will misuse this document outside this room."

McElroy's intervention elicited a rather stinging response, given the normally understated and exceedingly polite manner of bishops' meetings.

"My initial comments, and I think the group would be with me on this," replied DiNardo, "is that ours is a hermeneutic of continuity here, bishop. As you say yourself, 'If I read him correctly,' and we think we also read him correctly. And we also think that the way we have organized this – admittedly, in a structure that already existed, but with real attentiveness to the pastoral ministry and the magisterium of Pope Francis -- that we have brought in those considerations. Perhaps not to your satisfaction and the rhetorical flourish with which you bring them, but I think we have brought a dimension of the magisterium of Pope Francis and the later magisterium of Pope Benedict.

"And I do believe that the document still is very useful for teaching," DiNardo said.

There was some polite applause before the discussion period was interrupted by the Angelus and lunch. The discussion resumed in the afternoon, with the passage of Faithful Citizenship announced toward the end of the day's proceedings.