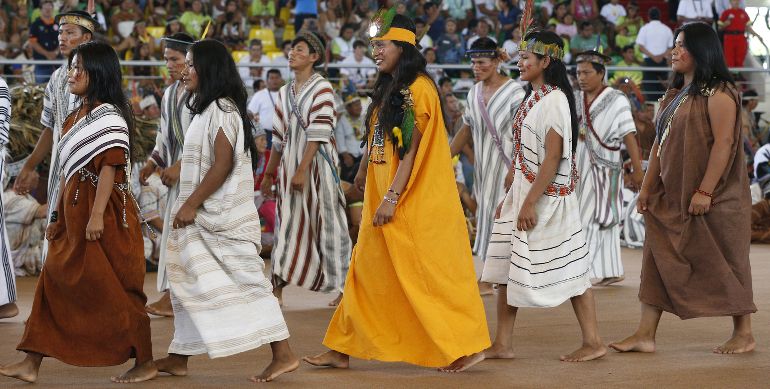 Rome — A Vatican document meant to help prepare for a special meeting of Catholic bishops from the Amazon rainforest focuses on how the church's ministry in the nine-nation region is overextended and calls for consideration of "new ways" to allow laypeople "better and more frequent access to the Eucharist."

The 14-page preparatory paper for the 2019 special assembly of the Synod of Bishops of the Amazon, released June 8, references the issue of overextension several times. At one instance, it states frankly that the church's pastoral care in the region "has been spread precariously thin."

"An incarnated mission implies rethinking the Church's limited presence in relation to the immensity of the territory and its cultural diversity," the document continues.

"Vatican II reminds us that all the People of God share in the priesthood of Christ, although it distinguishes between the common priesthood and the ministerial priesthood," it states. "This gives way to an urgent need to evaluate and rethink the ministries that today are required."

The paper also calls for discussion of women's place in Catholic leadership, saying: "it is necessary to identify the type of official ministry that can be conferred on women, taking into account the central role which women play today in the Amazonian Church."

Pope Francis announced the special Synod for the Bishops of the Amazon last fall, saying he wanted the Catholic Church "to identify new paths for the evangelization of God's people" in the world's most bio-diverse region.

Some speculation since has focused on whether the pontiff might wish the gathering to consider the possibility of opening up the Catholic priesthood to married men, in hopes of allowing the church to better minister in an area marked by difficult terrain and the spreading of populations over vast, hard-to-traverse distances.

Although the June 8 document does not specifically refer to the idea of allowing married priests, it repeatedly mentions the issue of access to the Eucharist.

At one point in the paper, which includes a questionnaire for the soliciting of input from Catholics at every level, the Vatican says the Synod process "requires an extensive exercise in reciprocal listening, especially between the faithful and the Church’s magisterial authorities."

"One of the main points to be heard is the cry 'of thousands of [their] communities deprived of the Sunday Eucharist for long periods of time,'" it states, quoting from the 2007 Aparecida document of the Latin American and Caribbean bishops.

At a Vatican press conference launching the document June 8, the head of the Synod office said the paper does not specifically mention married priests because his office did not want to unduly influence the direction of discussions leading up to the 2019 gathering.

"This is not an official declaration on the part of the Holy See on viri probati," said Cardinal Lorenzo Baldisseri, using a Latin term for "proven men" that is often used to describe husbands who might be able to become priests.

"Here we speak of ministry, there are lots of various forms of ministry," said Baldisseri. "Let's leave freedom to the discussion. We are not trying to preclude anything."

The preparatory document, written by the Vatican's office for the Synod with the help of an 18-member council chosen by Francis to oversee the 2019 meeting, unfolds over three brief parts, which take up the Catholic social teaching model of see/judge/act.

The paper opens with a preamble that considers the "vital importance" of the Amazon for the entire planet, and says a "deep crisis" has been triggered in the region by human activity and an "extractivist mentality."

"The Amazon is a region with rich biodiversity," the document states. "It is multi-ethnic, multi-cultural, and multi-religious; it is a mirror of all humanity which, in defense of life, requires structural and personal changes by all human beings, by nations, and by the Church."

Beyond questions of ministry, a lot of the paper's focus is on environmental concerns. It says that the diversity of the Amazon region is "being threatened by expansive economic interests," citing specifically "indiscriminate logging" and contamination of bodies of water from "indiscriminate use of agro-toxins, oil spills [and] legal and illegal mining."

The document also speaks at length about the situation of the estimated 390 different contacted indigenous peoples in the Amazon, noting that many in recent decades have left their traditional lands for cities, which it says are "characterized by social inequalities."

"The poverty produced therein ... has generated relationships of subordination, of political and institutional violence, and of increased alcohol and drug consumption," it states. "Poverty represents a deep wound in the lives of many Amazonian peoples."

"Today the cry of the Amazonia to the Creator is similar to the cry of God’s People in Egypt," the document continues later. "It is a cry of slavery and abandonment, which clamors for freedom and God's care."

The questionnaire included with the document contains 30 queries. Explaining the process by which the questions are to be used, the paper states: "The Spirit speaks through the entire People of God."

"Listening to it, we can learn about the challenges, hopes, ideas, and new paths that God is asking of the Church in the region," it continues. "This questionnaire is intended to help pastors respond to that invitation through consultation with the People of God."

The questionnaire follows the model of the document, splitting its queries into the three categories of see, judge, and act.

The third section contains a question focused on the availability of the Eucharist. It asks: "One of the major challenges in the Amazon Basin is the impossibility of celebrating the Eucharist frequently in all places. How can we respond to this need?"

That section also contains a question about women in the church, which asks: "The role of women in our communities is of utmost importance, how can we recognize and value them on our new paths?"

Bishop Fabio Fabene, the Synod office's under-secretary, said during the June 8 press conference that the next step in the process leading to the 2019 gathering will be meetings at the diocesan level, organized by local bishops, for Catholics to read and discuss the preparatory paper.

Fabene said the Vatican is hoping to receive responses to the document's questionnaire by February 2019, and that it will be up to local pastors to "collect suggestions, reactions, and observations."

The initial working document for the Synod, known in Latin as the Instrumentum Laboris, should be finished by June 2019, he said.

Clarifying which bishops will be taking part in the special assembly of the Synod, Fabene said each of the 102 prelates whose dioceses touch the Amazon will be invited.

Also invited will be the presidents of the seven bishops' conferences involved in the region, and the leaders of the Red Eclesial PanAmazonica, an ecclesial network of bishops from the region created in 2014.

The Synod's preparatory document cites a wide swath of church documents from the past century in its considerations. Among the primary references is material from the regional Episcopal Conference of Latin America and the Caribbean, known by its acronym CELAM.

Receiving particular reference is the final document from the group's 2007 meeting in Aparecida, Brazil. The Aparecida document, whose drafting was chaired by Cardinal Jorge Bergoglio, the future Francis, is cited by the Synod office 14 times.