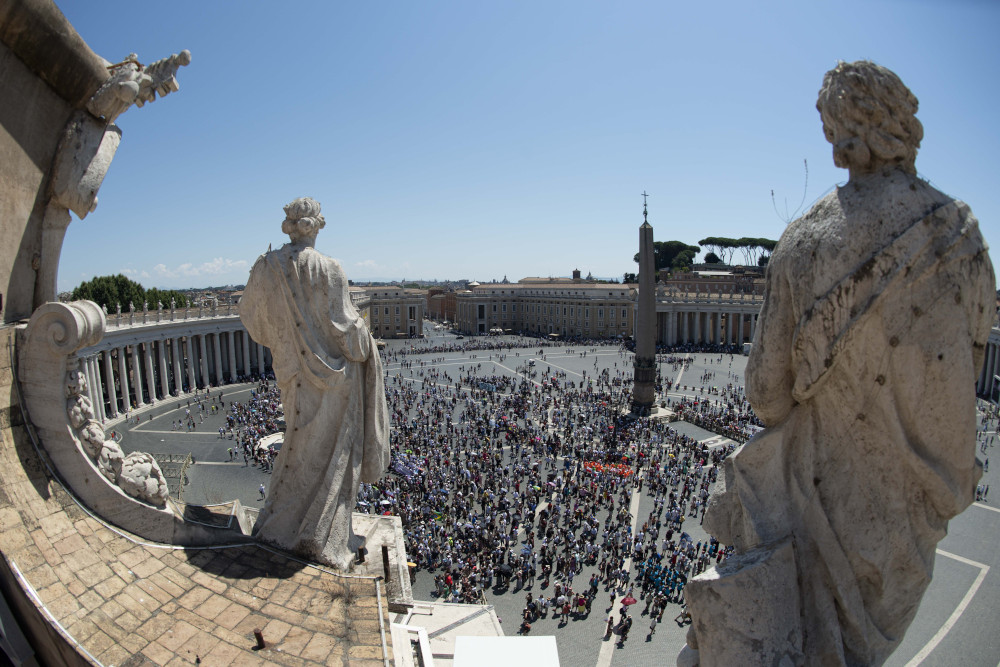 People in St. Peter's Square attend the Angelus led by Pope Francis from the window of his studio overlooking the square at the Vatican July 17. (CNS/Vatican Media)

The Vatican recorded a 3 million-euro deficit last year, far less than the 33 million euros projected, but faces an uncertain financial future due to structural problems, an underfunded pension system and other debts, the Holy See said Aug. 5.

The Vatican released its consolidated financial statement for 2021, part of Pope Francis' push to improve transparency and to bring order to the Holy See's murky finances with international budgeting and accounting standards.

The annual statement was written using different parameters than previous years, which focused mostly on the finances of the Curia, or Vatican bureaucracy.

The new parameters increase the number of entities covered from 60 to 92, including foundations, hospitals and other Holy See holdings, "to better reflect the economic reality of the Holy See," the Rev. Juan Antonio Guerrero Alves, the Vatican's economy minister, said.

"We are not looking for surpluses but for sustainability of the Holy See's service," he told Vatican Media. "A deficit of 3 million euro in a budget of 1.1 billion is not a lot; it is practically balanced, and it does not seem like a figure to cause concern."

But there were areas for improvement, Alves said, noting the pension system for Vatican retirees is underfunded and the debts of a debt-ridden Catholic hospital in Rome that has been brought into the Holy See's balance sheet for the first time. Just to cover costs, the Holy See has to sell 20-25 million euros in assets each year, he said.