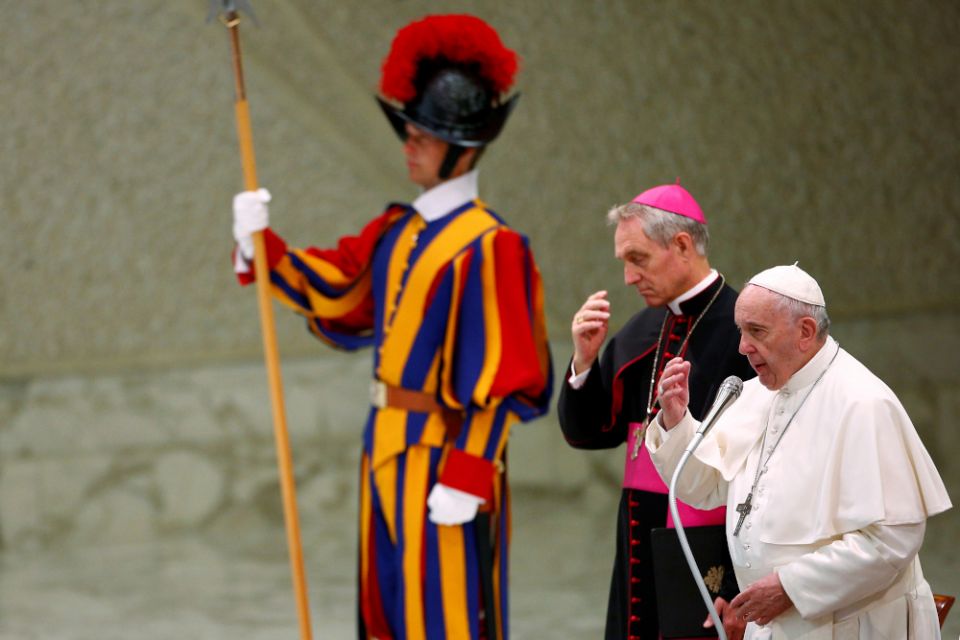 A Vatican Swiss Guard stands at attention as Pope Francis leads his general audience in Paul VI hall at the Vatican Aug. 7, 2019. At the pope's side is Archbishop Georg Gänswein, prefect of the papal household. (CNS/Reuters/Yara Nardi)

Vatican City — The Vatican press office confirmed Feb. 5 that there has been an adjustment to Archbishop Georg Gänswein's role as head of the pontifical household, following reports that Pope Francis had placed the German prelate on an indefinite leave of absence.

In an email to NCR, the press office said it had no information over whether Gänswein had been put on leave, but said there had been a "redistribution of the various commitments and duties" undertaken by the archbishop.

Gänswein has been serving concurrently as the prefect of Francis' official household and as the private secretary to retired Pope Benedict XVI.

The unspecified changes in the archbishop's duties occur after questions arose about his role in facilitating Benedict's unexpected involvement in a new book defending the Catholic Church's practice of clerical celibacy.

News of the book, originally described as co-written by the ex-pontiff and Cardinal Robert Sarah, came as Francis is known to be is considering the possibility of allowing older, married men to be ordained as priests in the Amazon region.

Gänswein's absence from his Vatican role had become noticeable in recent weeks. While the prelate has traditionally accompanied Francis at the pontiff's weekly Wednesday public audiences, he has not been seen at an audience since Jan. 15.

Likewise, although Gänswein is normally responsible for welcoming foreign leaders to the apostolic palace during visits with Francis, the archbishop has missed at least four major encounters in the last month: with U.S. Vice President Mike Pence on Jan. 24, Iraqi President Barham Salih on Jan. 25, Argentine President Alberto Fernandez on Jan. 31 and Bahraini Crown Prince Salman on Feb. 3.

Gänswein and Sarah, the prefect of the Vatican's worship congregation, have provided dueling accounts of Benedict's involvement in the new book, titled Des profondeurs de nos cœurs ("From the Depths of Our Hearts").

Although Sarah said that the ex-pontiff reviewed the entire manuscript and even approved the cover design, Gänswein claimed that Benedict only meant to contribute an essay and did not intend to be a coauthor for the volume.

Sarah also said that he and Benedict met in person several times since October 2019 to coordinate the project. Gänswein is the only person known to organize the former pope's calendar.

Gänswein was first appointed prefect of the pontifical household by Benedict in December 2012, two months before the then-pontiff announced his resignation.

Francis kept the German archbishop in the post, but also has appointed several personal secretaries, who are known to handle most of the pontiff's correspondence and personal calendar.

Aged 63, Gänswein is well under the traditional retirement age of 75 for bishops.

The archbishop originally entered Vatican service in 1995 as an official for the worship congregation. He later joined the staff of Cardinal Joseph Ratzinger, the future Benedict, at the Congregation for the Doctrine of the Faith.

Now is the time for the church to move toward compassion

Bishops debate: Where does doctrine end and pastoral practice begin?