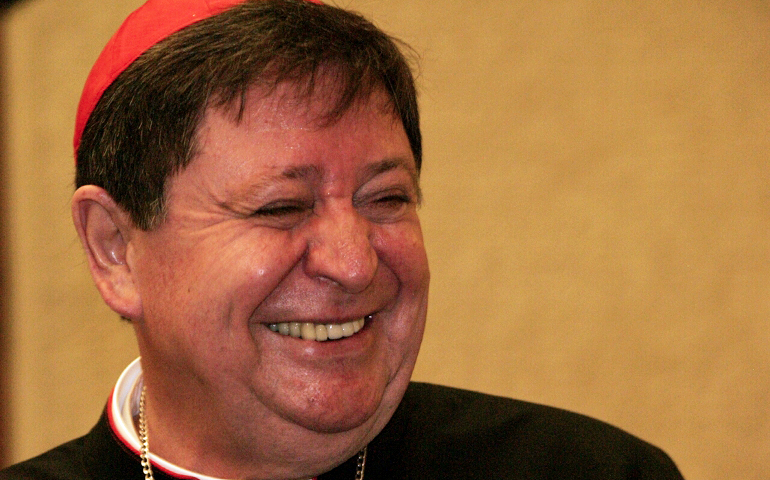 A cardinal has dismissed claims from the Vatican that remarks he made to NCR about a controversial 2012 criticism of U.S. Catholic sisters were misinterpreted, saying he backs NCR's report as "very precise."

The Vatican press office issued a statement Tuesday saying media commentary inaccurately reported the cardinal's remarks by indicating a split between the congregations.

Braz de Aviz has led the Vatican's Congregation for Institutes of Consecrated Life and Societies of Apostolic Life since 2011. As first reported by NCR, he was commenting on an action from the Vatican's doctrinal congregation under the leadership of U.S. Cardinal William Levada, who has since retired from the post.

Braz de Aviz, speaking to NCR on Wednesday at the Vatican after a papal audience with the leaders of Catholic sisters from around the world, said NCR's report of his talk gave an inaccurate translation of the word "authority" from his question-and-answer period.

However, "it was just a little, tiny point in the interview," he said.

NCR reported the cardinal as saying Sunday: "We are in a moment" where the ideas of "obedience and authority must be renewed, revisioned."

"Authority that commands, kills. Obedience that becomes a copy of what the other person says infantilizes," NCR reported him as saying.

Braz de Aviz said Wednesday, "The matter on obedience, that part was OK. But the question on authority, that translation was not accurate. I was trying to stress that authority cannot be domination."

Braz de Aviz said he understands that in an age of global communication and international language, translation nuances can be missed, a complexity of the times.

There has been tension between U.S. women religious and the Vatican, especially since the doctrinal congregation criticized LCWR, a group that represents about 80 percent of some 57,000 U.S. sisters, in April 2012.

In his remarks at the gathering of the International Union of Superiors General on Monday, Braz de Aviz said his office -- which is tasked with overseeing the work of an estimated 1.5 million sisters, brothers and priests around the world in religious orders -- first learned of the move against the U.S. sisters' group in a meeting with the doctrinal congregation after the formal report on the matter had been completed

At that meeting, Braz de Aviz said, he told Levada that the matter should have been discussed between the Vatican offices.

The Vatican's statement Tuesday said some reporting on the cardinal's comments had "suggested a divergence" between the two Vatican offices.

"Such an interpretation of the Cardinal's remarks is not justified," the statement, which was released in English, continued. "The Prefects of these two Congregations work closely together according to their specific responsibilities."

The women religious leaders met May 3-7 in Rome for the conference of the UISG, a membership group for the leaders of the world's congregations of sisters and nuns.

Following is the exchange at a press conference, which also included reporters from Reuters and Catholic News Service (CNS).

Braz de Aviz spoke in Italian. Rome-based Sacred Heart Sr. Margaret Phelan, the general archivist of her order, provided the English language translation for the question-and-answer session and for the sisters' meeting.

NCR: Was what we reported inaccurate?

Braz de Aviz: Just one sentence, the one on authority, because it was taken out of context. ... The rest of the article was fine.

NCR: What was the context that we missed?

And then the authority says what one needs to do, and in that moment I need to obey, in faith. I don't remember what the word you used was, but the word didn't carry that feeling.

NCR: On Tuesday, the Vatican said that we suggested there was a separation between the two Vatican congregations. We didn't say --

You're very precise. There was the difficulty in the room because the translation wasn't exact. Afterward, I tried to explain that, but perhaps it wasn't sufficient. But I don't hold that against you because it doesn't do me damage.

It doesn't diminish the quality of your work, as far as I'm concerned. There is just the difficulty sometimes -- and there are difficulties, that's for sure. And we have to try to help each other to clarify.

To understand authority, obedience. That's a very important point. The pope spoke [Wednesday] of this other important point: Christ and the church. The two have to be together. For some people, Christ is fine, but the church isn't. You can't separate the two. These difficult points have to be clarified, and it's not easy.

Reuters: How do you think the pope's speech will be received?

I really think one thing: Among men, women, among us consecrated people, we still have to mature a great deal. I said this to the religious: First, to protect ourselves, we stayed far away from each other, and this led to the point where we no longer knew each other. Consecrated men don't know consecrated women, and vice versa. This leads us to mistrust; we condemn the other because we don't know each other.

Reuters: Pope Francis is trying to minimize this?

Pope Francis trusts us so much it almost frightens us, in general. But he always has to speak as the pope. For me, I have to really use this trust well. This is a pain for us -- it's something we have to work on. Our world is full of slippery territory. You say something; the other person interprets it to their own understanding of truth. This is difficult for us. We have to find a common point. We must always believe and work.

Reuters: The American sisters in particular, they feel hurt by what is happening. How can we overcome what they feel is a hurt?

They must say what is in their hearts sincerely. Say it, but they must also find a way of clarifying in dialogue what does it mean that doctrine is not their issue, their responsibility. There is something very difficult that still has to be worked out and clarified.

CNS: In public opinion, you have made a very good step to show that perhaps church leaders are trying to understand the sisters. And then with [Tuesday's] declaration it seemed to be a step --

I haven't seen [the communiqué from the Vatican press office] yet.

CNS: It says that you and Archbishop [Gerhard] Müller met, that the journalists misunderstood what you had said to the press, and that you and the Doctrine of the Faith are united in the decision against the sisters.

It was just a little, tiny point in the interview with NCR on authority, but nothing else. The rest was OK.

We are very, very fond of USG and UISG [the two representative organizations for men and women religious around the world]. We like them very much. We're very close to them. We never say a word until we have spoken together. And we like each other.

Now we have returned to having a word directly from the pope. We haven't had it since before our time. What more can we do? With this goodwill, I think we will make a lot of progress.

At certain points, the church might be able to live [with] uncertainty about ministerial ordination for women -- I don't think so, but that doesn't mean there's a supremacy of men over women. There's a distinction, yes, but Jesus left it that way, not us. ...

We need more women in everything, in the general congregations. The presence of women humanizes us.