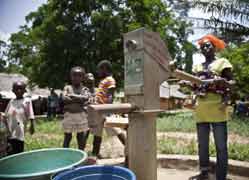 People fill buckets with water from a pump in the Liberian border village of Sawien in this photo released to Reuters April 4. Caritas Ivory Coast helped care for some of the million people displaced by the violence Ivory Coast in March and April.

VATICAN CITY -- The general assembly of Caritas Internationalis in late May is shaping up as a defining moment for the confederation of 165 national Catholic charities, at a time when the Vatican is insisting on greater control over Caritas operations.

The agenda of the May 22-27 meeting reflects the Vatican's moves toward closer collaboration and supervision: On the assembly's first full working day, four Vatican officials will speak on the crucial topics of Catholic identity and the juridical status of Caritas Internationalis in the universal church.

Then new statutes for the organization, prepared by a working team of the Holy See and Caritas Internationalis, will be reviewed -- statutes that, according to Caritas officials, would require them to consult with the Holy See before making certain decisions and would acknowledge the Holy See's authority over Caritas' financial and personnel issues.

The changes have not come without tension, but Vatican sources said that in recent talks with top officials of Caritas Internationalis the atmosphere has vastly improved, and that there's been "a great level of cooperation." They emphasized that the Vatican remains very supportive of Caritas and appreciates the key role it plays in promoting the church's social teaching and helping those in need.

The Vatican's move toward participation in the governance structures of Caritas Internationalis, the church's worldwide aid and development organization, is motivated in part by the organization's high public profile.

"Caritas Internationalis, as a public entity of the church, is authorized to speak and act for the church in the international forum. Because of that right and duty, it needs to speak the church's language and make sure that its activities and its agreements with non-Catholic agencies reflect what the church teaches," said one Vatican official.

The Vatican, recognizing that Caritas Internationalis is a confederation of local independent charities that depend on local bishops, also wants the bishops more directly involved in oversight and collaboration.

Independent of its ongoing dialogue with Caritas Internationalis, the Vatican is giving closer attention to the church's charitable activities in general.

Catholic News Service has learned that the Vatican is currently studying a draft document on the role and responsibility of bishops regarding the church's charitable organizations. The draft document has been prepared by the Pontifical Council Cor Unum and is being reviewed by the Congregation for the Doctrine of the Faith and other Vatican agencies.

Changes are expected to the text and its publication is not imminent, in part because it touches on complicated issues, sources said. But the project is an indication of the Vatican's increased interest in promoting a clearer Catholic identity in the church's charitable activities at every level.

The Vatican's concern is also reflected in its own relationship with international agencies. Sources said, for example, that in recent months the Vatican has, at least temporarily, suspended contributions to certain U.N. agencies dealing with refugees, indigenous peoples and disarmament.

The Vatican's contributions in the past were not large but were seen as symbolic gestures of support. The new policy apparently is a consequence of Vatican disquiet over long-standing disagreements with the United Nations on issues such as abortion, population control and the family.

The debate over Caritas Internationalis became public in February when news emerged that Vatican officials had prevented the organization's secretary-general, Lesley-Anne Knight, from seeking a second four-year term. The Vatican withheld the approval, or "nihil obstat" ("nothing stands in the way"), when she submitted her name as a candidate to continue in the position.

Caritas officials, citing Knight's accomplishments, expressed deep regret at the Vatican's decision and asked the Vatican secretary of state, Cardinal Tarcisio Bertone, to reconsider -- but to no avail. The move was seen as a sign that the Secretariat of State was assuming a much more direct role in Caritas operations than in the past.

Vatican sources did not dispute that but took issue with the suggestion that Knight's departure was an injustice. They said Knight was a manager with a four-year contract, and the Vatican's commitment to her ends with the expiration of her contract in May.

In recent weeks, as Caritas and Vatican officials met to prepare for the general assembly, there's been an effort to move past that issue and back off the rhetoric. As a result, one source said, there has been a great deal of progress toward finding common ground.

Three candidates to replace Knight as secretary-general have been given the "nihil obstat" by the Vatican and will stand for election by the confederation members, sources said. They are:

Whoever is elected will have to deal with establishing a new relationship with Vatican officials, one that involves better dialogue and cooperation with the Holy See, as Vatican experts put it. In their view, Caritas Internationalis needs to understand that as a "public juridical entity" of the church -- a status assigned Caritas in 2004 -- it functions under the administration of the Vatican.

Just what that status entails has been the subject of talks between Caritas Internationalis and the Secretariat of State and their respective canon law experts. A year ago, Caritas submitted to the Vatican a new set of statutes, and the two parties began talks on revising and adapting the canonical rules that apply to such entities. They are still discussing the details, but Caritas officials say it's clear that the final word belongs to the Holy See.

Vatican officials underlined that the increased Vatican supervision foreseen by the new statutes corresponds to canon law provisions that regulate the church's public juridical entities, including the administration of their temporal goods.

In some ways, the legal and structural questions boil down to different points of emphasis. As one Vatican official remarked, "Caritas Internationalis is not a type of international democracy." Local Caritas organizations depend on local dioceses, he said, and the "true stakeholders" of Caritas are the bishops and the pope.

Caritas officials acknowledge that but say the structure of Caritas has never been top-down.

"This is a confederation, and the principles of autonomy and subsidiarity need to be at work," said one source.

Vatican officials said the new statutes will respect those principles, and that this point will be explained and clarified at the general assembly.

In recent years, the Vatican has been particularly concerned about some of the cooperative ventures and working agreements Caritas Internationalis has made with U.N. and other international agencies, not all of which share the church's moral perspectives.

For example, in 2009 Caritas Internationalis and the U.S. Embassy to the Vatican co-sponsored a Rome conference on church-state partnerships to fight HIV and AIDS. Among the speakers was Michel Sidibe, executive director of UNAIDS, the United Nations' agency that coordinates the global response to HIV/AIDS.

Caritas Internationalis has argued that while the church may have some differences with the United Nations and other organizations on their approach to AIDS, it's important to keep cooperative channels open and make sure the church has "a seat at the table" when international AIDS policies are discussed.

Vatican officials have also faulted some Caritas Internationalis policy documents and publications. A 2006 document on gender strategies, in their view, adopted the loaded or ambiguous terminology of "gender politics" instead of expressing church teaching. Caritas officials, who agreed with some of the objections, said the offending document was quickly removed from circulation.

A related concern is that Caritas policy documents, while competently done, are sometimes mistakenly seen as official pronouncements of church teaching. Caritas Internationalis should promote its policy positions on economic or political matters in a way that is "not dogmatic," one Vatican official said.

Caritas officials said, however, that the organization has been careful to consult with the Vatican on such issues. They said the only policy document published over the past four years was one on climate justice, which was submitted to the Secretariat of State for review more than a year before its publication.

The new draft of the statutes addresses this issue, establishing a formal mechanism of consultation between Caritas Internationalis and the Vatican on advocacy documents and position papers.

On the much-discussed issue of "Catholic identity," the Vatican said it was not asking Caritas to "proselytize" in carrying out its charity work worldwide, but rather to always use language that reflects the church's teaching about the human person. Caritas officials agreed but said this was already being done, pointing to the 2010 document on climate justice as an example.

The identity issue is also related to the way Caritas understands its place in the universal church -- the "theological dimension" that Vatican officials say has been somewhat neglected in the past, but which will take center stage at the start of the upcoming general assembly.

'We must wait and see,' pope says of President Trump

Pope approves canonizations, but doesn't set date because of pandemic

Synod on the family to open amid high expectations, doubts about process

Amid tensions in China, Vatican tells clergy to follow their conscience