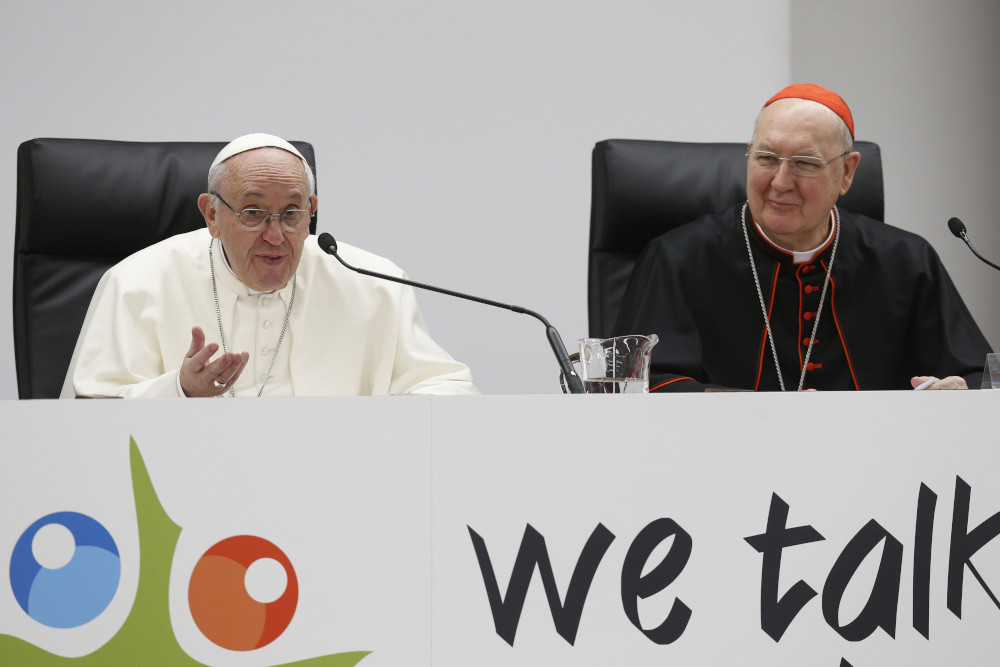 The Vatican has issued the preparatory document and a "handbook" for dioceses as part of the global church's preparation for the 2023 assembly of the Synod of Bishops, discussing the theme, "For a synodal church: communion, participation and mission."

"Pope Francis invites the entire church to reflect on a theme that is decisive for its life and mission: 'It is precisely this path of synodality which God expects of the church of the third millennium,'" the new document said.

As such, the preparatory document and its questions are "at the service of the synodal journey, especially as a tool to facilitate the first phase of listening to and consulting the people of God in the particular churches in the hope of helping to set in motion the ideas, energy and creativity of all those who will take part in the journey, and to make it easier to share the fruits of their efforts," it said.

"The purpose of this synod is not to produce more documents. Rather, it is intended to inspire people to dream about the church we are called to be, to make people's hopes flourish, to stimulate trust, to bind up wounds, to weave new and deeper relationships, to learn from one another, to build bridges, to enlighten minds, warm hearts, and restore strength to our hands for our common mission," the preparatory document said.

The handbook or "vademecum" offers guidelines for bishops and those helping facilitate the synodal process locally on how they can best listen to and consult with Catholics and the wider community, particularly those on the margins of society, as well as Christians and non-Christians.

The materials were released Sept. 7 at a news conference at the Vatican and online in English and Spanish at the synod's official website: synod.va/en.html and synod.va/es.html.

Pope Francis is scheduled to formally open the synod process at the Vatican Oct. 9-10, and the bishop of every diocese should open the process in his diocese Oct. 17. The diocesan phase runs until April.

The materials present a number of questions to help prompt reflection, input and ideas from as many people as possible.

The questions fall under 10 general themes, and people can address what is most pertinent to their situation and "share with honesty and openness about their real-life experiences, and to reflect together on what the Holy Spirit might be revealing through what they share with one another," the document said.

Some suggested questions include: "To whom does our particular church 'need to listen to'" and "how are the laity, especially young people and women, listened to? How do we integrate the contribution of consecrated men and women? What space is there for the voice of minorities, the discarded, and the excluded? Do we identify prejudices and stereotypes that hinder our listening? How do we listen to the social and cultural context in which we live?"

However, the basic and most fundamental question guiding the whole process is: "How does this 'journeying together,' which takes place today on different levels -- from the local level to the universal one -- allow the church to proclaim the Gospel in accordance with the mission entrusted to her; and what steps does the Spirit invite us to take in order to grow as a synodal church?" the document said.

Speaking at the Sept. 7 news conference, Cardinal Mario Grech, secretary-general of the Synod of Bishops, and others explained the main objectives and characteristics of a synodal process, which is "a spiritual process" that requires listening to the Holy Spirit as well as to each other.

"The synod will succeed or fail to the extent to which we rely on the Holy Spirit," the cardinal said.

The cardinal urged reporters to offer "correct communication" of what the synod and synodality are about, including not painting it as "a parliament" or as different sides playing against each other "in which the one who has more strength influences or subjugates the other."

When asked about the possibility of allowing women to vote in a Synod of Bishops, Grech said he felt troubled by so much focus being on "the vote," saying "it is not the vote that matters."

What matters is the larger process that involves the entire people of God coming together to find common ground, which is not easy, he said. "So perhaps we have to insist more on how we can dialogue, converse, discern together in order to possibly reach this harmony," find consensus and not depend so much on the votes cast during the later phase of a synod.

Xaviere Missionary Sr. Nathalie Becquart, one of two undersecretaries to the Synod of Bishops, will be the first woman with a right to vote at a meeting of the Synod of Bishops. In March, when she was appointed, Grech said permitting her to vote in a synod was "a major milestone" and was something that should not be limited to just this one institution or just to voting rights.

Myriam Wijlens, a canon lawyer and Synod of Bishops consultor, told reporters that women need to "present themselves" and speak up "courageously" during this consultation phase. It will also be important to listen to what women from non-Western cultures are saying, she added.

The handbook said even though dioceses will be asked to spend six months doing extensive outreach and consultation with as many people as possible, the synodal process "is not a mechanical data-gathering exercise or a series of meetings and debates."

"Synodal listening is oriented toward discernment," in which people listen to each other, to their faith tradition and to "the signs of the times in order to discern what God is saying to all of us," it said.

Widespread participation is an important part of the diocesan process, the document said, with no one being excluded. "We must personally reach out to the peripheries, to those who have left the church, those who rarely or never practice their faith, those who experience poverty or marginalization, refugees, the excluded, the voiceless, etc."

This will require creativity, especially in parts of the world where restrictions aimed at curbing the spread of COVID-19 are still in place, it added.

All the feedback that is generated throughout the listening process should be gathered into a "synthesis" after each gathering, followed by a "synthesis" to be written for each diocese and ultimately for each bishops' conference.

Bishops' conferences and the synods of the Eastern Churches will provide a synthesis of all the local feedback to the Synod of Bishops, and all of that material will be the basis for the writing of two working documents. Bishops and auditors will then gather with Francis at the assembly of the Synod of Bishops in Rome in October 2023 to speak and listen to one another on the basis of the process that began at the local level.

The handbook said the synthesis "does not only report common trends and points of convergence, but also highlights those points that strike a chord, inspire an original point of view, or open a new horizon. The synthesis should pay special attention to the voices of those who are not often heard and integrate what we could call the 'minority report,'" it said.

Bishops have an important role throughout the synodal process as "pastors, teachers and priests of sacred worship," the handbook said. "Their charism of discernment calls them to be authentic guardians, interpreters, and witnesses to the faith of the church."